Home News Reports ‘The world is behind them’

‘The world is behind them’

In late March, Stanislas Vilgrain drove in a convoy of eight trucks from France to Ukraine for 26 hours through a snowstorm, keeping an ear to the radio for news of Russian attacks, The convoy’s mission: to deliver 400,000 meals to Ukrainians from Vilgrain’s Sterling-based business, Cuisine Solutions.

The French-born chairman of a company that manufactures sous-vide (vacuum-packed) foods, Vilgrain had heard that the Russian invasion had severely impacted Ukraine’s food supply, and he was determined to do what he
could to help.

That is what has compelled Vilgrain and other Virginia-based business executives to help the people of Ukraine, either by traveling there in person to assist or by sending financial donations and goods. Over the past few months, corporate aid from businesses in the commonwealth to Ukraine has come in the form of everything from money and food to medical supplies and drones.

Vilgrain’s company typically supplies food for airlines and the military, so when he saw that the Russians were targeting Ukraine’s food supply, he wanted to make sure people there were not going hungry. He started figuring out how to get food from France, where Cuisine Solutions has a plant. He made contact with high-level Ukrainians through YPO, a worldwide association for chief executives.

Vilgrain traveled to Ukraine with 15 of his employees, including his chief marketing officer, Thomas Donohoe.

“I felt that … [with] me personally going as a C-level executive, it would mean a bit more” and could encourage executives from other companies to do the same, Donohoe says.

Virginia business leaders like Vilgrain say they have chosen to involve their companies in the philanthropic efforts to aid Ukraine because a corporation can have a bigger impact and a louder voice than any executive acting individually.

Mike Lowder, operations manager for Petersburg-based MST & Associates Inc., says, “Whether it’s logistical relationships or nonprofit relationships or company relationships, we have the ability to work with our customers to further the [aid] pipeline that I don’t think the average person has.” A wholesaler of surplus medical and surgical equipment, MST sent 24 pallets of medical supplies, worth about $230,000, to Ukraine at the end of April.

MST has contracts with about 50 medical facilities around Virginia. The pandemic-
generated increase in production of personal protective equipment (PPE) such as gloves, gowns, surgical masks, shoe covers, hair covers and hand sanitizer has ultimately resulted in surpluses. With a lot of extra PPE stored in their warehouses, Lowder made plans to send it to Ukraine, where it was in high demand.

“[Russia’s invasion of] Ukraine is coming at a terrible, terrible time and cost to the people there, but it’s coming at an advantageous time for us,” Lowder says. “Anything we can do to assist over there is what we are trying to do. They have an acute need and we are trying to fill it.”

Other Virginia-based businesses with a presence in Europe, such as Smithfield Foods Inc., also are stepping up to help the embattled republic.

Lukasz Dominiak, Warsaw-based public relations director for the pork products manufacturer’s Smithfield Polska division in Poland, has been coordinating donations of food to Ukrainian refugees in Warsaw. Smithfield has 1,600 Ukrainian employees who work near the Ukrainian border in Hungary, Poland, Romania and Slovakia, according to the company, which is helping with relocation and employment.

For example, Dominiak says, his friends have been driving to the border and offering rides for refugees who just crossed.

“There is a special, unique relationship between the two countries on the government level and the people,” Dominiak says of Poland and Ukraine.

Smithfield has provided $2 million in cash and in-kind donations to crisis relief efforts in Ukraine.

“It wasn’t just these actions we took as a company; it was individual actions our employees took — those are the things I’m so proud of,” he says.

Arlington-based Nestlé USA’s parent company in Switzerland employs 5,800 people in Ukraine and has been helping them by giving advance payment of salaries, enabling employee transfers and supporting hubs in neighboring countries for employees and their families who have fled Ukraine.

Another Virginia-based business is aiding Ukraine by donating drones.

Arlington defense contractor AeroVironment Inc. donated 110 unmanned aircraft systems and training services to defense officials in Ukraine. Originally designed for agricultural use by farmers, the drones are easy to use and can provide aerial intelligence.

“We feel very connected to their fight and we feel very connected to the mission of helping them and we had these Quantix Recon aircraft, and so we asked ourselves [if] could we buy those … at no charge, just to bolster their defense,” recalls Charlie Dean, AeroVironment’s vice president for global business development and sales of unmanned aircraft systems. “It was something that we felt in our hearts we could do. [There was] far too much suffering going on and perhaps our donation could help.”

For some companies, assisting with Ukrainian relief efforts has been even more personal.

Norfolk-based PRA Group Inc., a global debt-buyer with 201 employees in Poland, provided $50,000 to support those employees’ efforts to aid Ukrainian refugees and send supplies to the war-torn nation. When a Canadian employee heard that PRA was helping Ukrainians, she sought the company’s assistance to help a cousin who was trying to flee Ukraine. The operations director of PRA Group Poland picked up the cousin and her 7-year-old child from the border. The two got out in the nick of time — the next day, the cousin’s hometown was bombed.

Operation Blessing, the Virginia Beach-based nonprofit arm of The Christian Broadcasting Network Inc., has been providing food and other supplies to Ukrainian refugees who have been pouring into Poland. Though the nonprofit has helped people in Ukraine and other European countries for years, the war in Ukraine has ramped up their efforts.

“There is so much need and suffering that is taking place among those people. For us, as Operation Blessing, what drives us to be involved is our faith in Jesus Christ,” says Jeff Westling, Operation Blessing’s chief of staff. “We want to serve as his hands and feet.”

Mason Pigue, Operation Blessing’s director of humanitarian relief, is in touch daily with the nonprofit’s relief teams on the ground in Ukraine. During the first 10 to 15 days after the invasion, the relief workers sheltered from the attacks, but they have remained to stay and assist those in need.

“It’s a calling,” he says. “They feel like it’s something God has led them to do.”

Pigue and Westling both have military experience and can relate to the people on the ground.

Westling has a military logistics and engineering background, so his task is to make sure that Operation Blessing is equipping, enabling and empowering their team members around the globe — in this case, in Ukraine and Europe — to make sure they have what they need. Their teams are providing food and water and shelter and even counseling services to the embattled Ukrainians.

‘Keep yourself in the fight’

Businesses large and small across the commonwealth have found ways to help Ukraine.

Herndon data analytics firm HawkEye 360 Inc. and the Arlington-based National Security Space Association have convened a group of space industry companies to assist with fundraising. Space Industry for Ukraine (SIFU), which includes Virginia companies such as Leidos and BlackSky Technology Inc., raised nearly $1 million as of the end of April, with each company donating at least $50,000. SIFU’s funds will finance a number of projects in Ukraine, such as medical treatment, delivery of food supplies and supporting transportation for evacuating civilians.

McLean-based Mars Inc., one of the world’s largest candy and pet food manufacturers, donated $12 million in cash and in-kind donations to provide basic needs for children and families still in Ukraine as well as those who have sought refuge in border countries.

Many companies, such as Herndon-based government contractor Peraton Inc., Richmond-based Performance Food Group Co. and others are donating thousands of dollars to Washington, D.C.-based nonprofit World Central Kitchen, which provides meals at a pedestrian border crossing in southern Poland.

​​Smaller businesses across the common-wealth are helping as well. Several Virginia breweries have joined the “Brew for Ukraine” initiative, which aims to raise money for humanitarian relief and call attention to Ukraine’s plight through beer sales. It’s raised several thousand dollars per day, organizers say.

In late April, the 88-member Rotary Club of Richmond raised $75,000 to support the citizens of Ukraine and global disaster relief organization ShelterBox USA. It is seeking additional individual and corporate donations, with the goal of matching the $75,000.

The push to raise money for Ukraine and send resources and donations has spread far and wide since Vilgrain went overseas to help.

He was encouraged by his trip and is already planning to go back. He’s been talking to anyone who will listen about his trip and Ukrainians’ need for aid. “Everybody here is concerned and it’s extraordinary to see – it’s far away, it’s in Europe,” he says.

He thinks the need to help Ukraine is resonating here because the country is a democratically elected republic that is defending itself after being invaded by a much larger autocratic government.

“It created a big movement in the U.S., in Americans, in Europeans … protecting our values, protecting what we believe in, with a country that actually defends itself. If they were not defending themselves, it would have been over in a day or two, but they defend themselves,” he says.

“I keep sending messages to friends in Ukraine and tell them, ‘Keep yourself in the fight.’ … It’s very good for the morale of the Ukrainians to see that the world is behind them.”

This story has been updated from an earlier version. 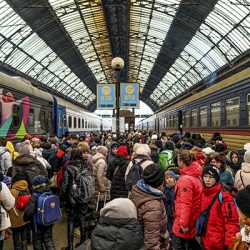 Mars, Hilton and CMA CGM Group among those taking action 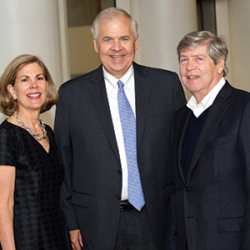