You’d think federal budget cuts would be the biggest worry for a government contractor like Arlington-based Dynamis. Nonetheless, a more pressing issue for John Braun, its president and chairman, is the rising cost of health care.

Dynamis’ health in­­­surance costs increased 22 percent from 2013 to 2014. That’s actually the good news — the original quote was much higher. “We actually ended up negotiating with [the insurance company] and getting that number down,” Braun says.

Health-care expenses are the No. 1 financial issue Virginia businesses are facing, according to the 2015 Economic Expectations Survey conducted by the Virginia Society of Certified Public Accountants. The society surveyed 9,598 members on their outlook about the economy and financial hurdles their clients are encountering.

One of those hurdles, they say, is federal health-care reform. Seventy-four percent of the more than 300 respondents believe the Affordable Care Act is hurting the U.S. economy. But when asked whether the ACA should be reformed or repealed, CPAs were almost evenly split — 51.8 percent want it reformed, while 48.2  percent say the law needs to be repealed.

Overall, CPAs had a cautious outlook about the economy in the Old Dominion and the U.S. but were more optimistic than previous surveys. 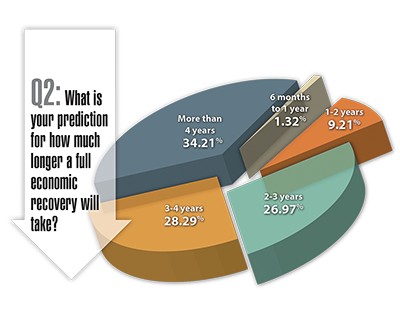 In the latest survey, CPAs are almost evenly divided in deciding whether the U.S. is in a sustained economic recovery. More than 30 percent believe that a full recovery will take more than four years.

That somewhat gloomy response, however, still represents a sunnier outlook than seen in the VSCPA’s survey three years ago. Back then, more than two-thirds (67.7 percent) of respondents did not believe the U.S. had begun a sustainable economic recovery while 32.3 percent believed it had.

In addition to health-care costs, the survey says infrastructure is the state’s most pressing issue. (Other top issues are federal budget cuts, government regulation and education.)

Ryan Losi, executive vice president of PIASCIK, a CPA firm in Glen Allen, says the state’s biggest infrastructure problem is the deteriorating condition of its roads. “Our roads were not built to handle the container volume that they’re currently handling … and cars don’t really beat up interstates and highways; trucks do,” Losi says. 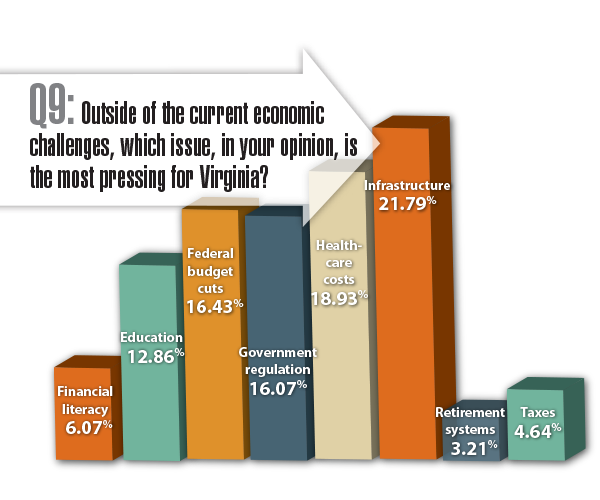 Some relief for the commonwealth’s roads was expected to come from a landmark transportation-funding bill approved by the Virginia General Assembly in 2013. When it was passed, the legislation was supposed to boost transportation projects by $4 billion, although that number depends on economic conditions.

A proposed federal law, the Marketplace Fairness Act, was expected to supply part of the transportation funding. It would allow states to collect sales tax from out-of-state Internet retailers. The bill, however, is stalled in Congress. If the legislation isn’t passed by Jan. 1, the commonwealth’s wholesale gas tax will increase from 3.5 to 5.1 percent.

Rough roads are bad for business, but the survey identifies the availability of an educated workforce as one of two factors that have the greatest impact in retaining or attracting business to Virginia (the top factor being a pro-business climate).

Stephen Fuller, director of the Center for Regional Analysis at George Mason University, says Virginia will need to fill almost 1.3 million new and replacement jobs between 2012 and 2022. That job-creation number is lower than previous projections because of the slowdown of the Virginia economy as a result of decreased federal spending from 2011 to 2014, he says.

Another economist, Chris Chmura, the head of Chmura Economics & Analytics in Richmond, sees education as the biggest long-term issue for the state in creating a skilled workforce. She believes Virginia needs to ensure students receive the skills for occupations that are in demand and that they are trained in a cost-effective manner. “It seems that our education system is in need of undergoing some change to help bring down the costs for students,” she says.

While education is a long-term issue for Chmura, she says federal budget cuts will be the biggest issue confronting Virginia next year. The CPAs also identify the federal spigot as a major dilemma.  Almost 86 percent of respondents said the commonwealth has not done enough to lessen its dependence on federal spending.

Respondents also say partisanship — largely blamed for triggering sequestration (across-the-board spending cuts) — is preventing the federal government from addressing urgent needs that have an impact on business.  Federal budget cuts also were especially a big concern for CPAs in Northern, Southeast and Central Virginia taking the survey (they picked “infrastructure” or “health-care costs” as the most pressing issue for the state, but “federal budget cuts” were the No. 2 concern).

Although Northern Virginia rebounded quickly after the recession and regained the jobs it lost, “right now they’re dead in the water,” Chmura says. “Employment is not growing, and that’s what’s driving Virginia’s economy to be so weak.” In September (the last available statistic), employment in Virginia had grown by three-tenths of a percentage point since September 2013. The national job-growth rate, however, increased by 1.9 percent during the same time period.

BirchGrove Consulting, a Potomac, Md.-market research firm, predicts the commonwealth stands to lose approximately $13.5 billion of its defense funding from fiscal year 2013 to FY2018.  Northern Virginia and Hampton Roads will be the hardest hit by sequestration. They stand to lose 35 percent and 23 percent of their defense funds, respectively.

Virginia has not been guaranteed a certain amount of defense dollars, but “it is fair to say, all-things-equal, the commonwealth is facing reductions of that magnitude in the future years,” explains Raymond C. Bjorklund, president of BirchGrove Consulting, in an email.

Yet sequestration hasn’t hampered growth at Dynamis, which primarily provides services to the U.S. departments of Defense and Homeland Security. The firm employs about 85 people and was recently named to Inc. magazine’s list of the 5,000 fastest-growing companies. Many other government contractors, however, have not been as fortunate, Braun says.

“Companies that are either small or are willing to bid on jobs that they can do for a low price tend to beat the larger and the midsize companies because they are more flexible … they are cheaper and they are in an environment where contracting officers are choosing the low price over the known provider,” he says. “So for us, actually, this strange … convolution of events has been fairly good. If you’re a midsize company not protected by small-business status and not really in a position to offer a low bid, it’s been very dramatically painful.”

Dynamis may be able to offer lower bids than its counterparts on contracts, but offering fewer benefits to its employees is not an option. Because he already offers health coverage, Braun doesn’t expect to be affected by the ACA’s employer mandate going into effect next year.

Survey respondents, however, believe the mandate will have a major effect on businesses next year. It will force some companies to offer health-care benefits to their employees for the first time. 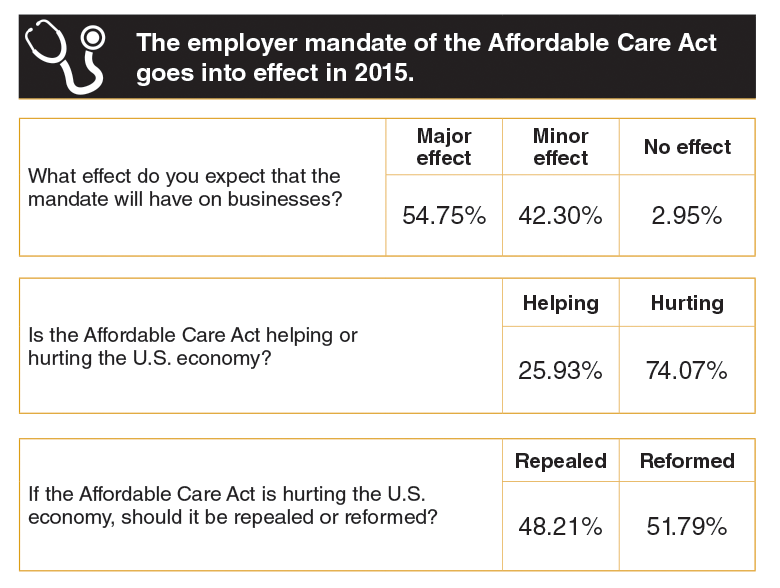 The mandate says that, in 2015, employers with 100 or more full-time-equivalent employees will have to offer workers affordable health-care coverage that complies with ACA standards. If they don’t, and that employee receives a tax credit for purchasing insurance on the Health Insurance Marketplace (healthcare.gov), the employer may have to pay a penalty. In 2016 and beyond, the mandate will affect businesses with 50 or more full-time-equivalent workers (in this case, a full-time employee clocks in an average 30 hours or more per week).

The survey also identifies health-care costs as the top issue that needs to be addressed in the 2015 Virginia General Assembly session. 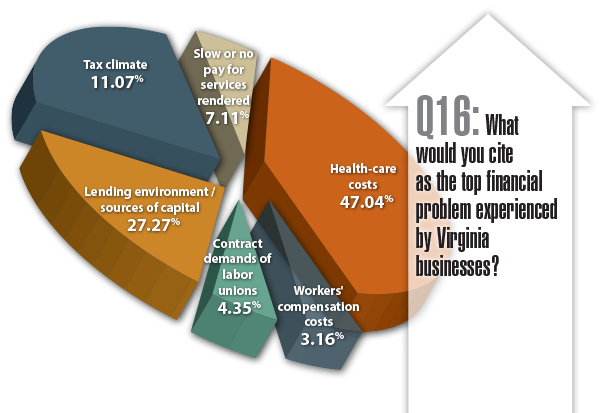 Nonetheless, there may be little that the Virginia General Assembly can do. “We will ultimately be examining potential reforms to the industry, but the provisions of the law may stymie that effort,” Del. Kathy Byron (R-Lynchburg), chair of the legislature’s Health Insurance Reform Commission, says in an email. “Because the ACA is imposed on the states and uses a ‘one-size-fits-all’ approach to health care, the options available to states that would mitigate its negative effects are limited.”

Barry DuVal, president and CEO of the Virginia Chamber of Commerce, believes the continued rollout of the ACA will especially affect small businesses (defined by the chamber as companies with 250 full-time workers or fewer), because most large employers are already meeting ACA’s standards. Overall, the chamber estimates that businesses in Virginia will incur $16.4 billion in ACA-related taxes from 2014 through 2022.

Greg Lawson, partner at Dixon Hughes Goodman in Newport News, assesses the confusion businesses are facing: “The issues are from a business perspective, in my mind: Are we covered under this legislation or not? Are there strategies where we can avoid coverage under this legislation? How do we educate our employees as to what opportunities the legislation presents for them?  How do we manage our entire employee benefit model around this regulation and still be able to pay a competitive wage to our employees and give fair return to our shareholders?”

Fielding those kinds of questions, no wonder CPAs are concerned about the effects of the ACA. 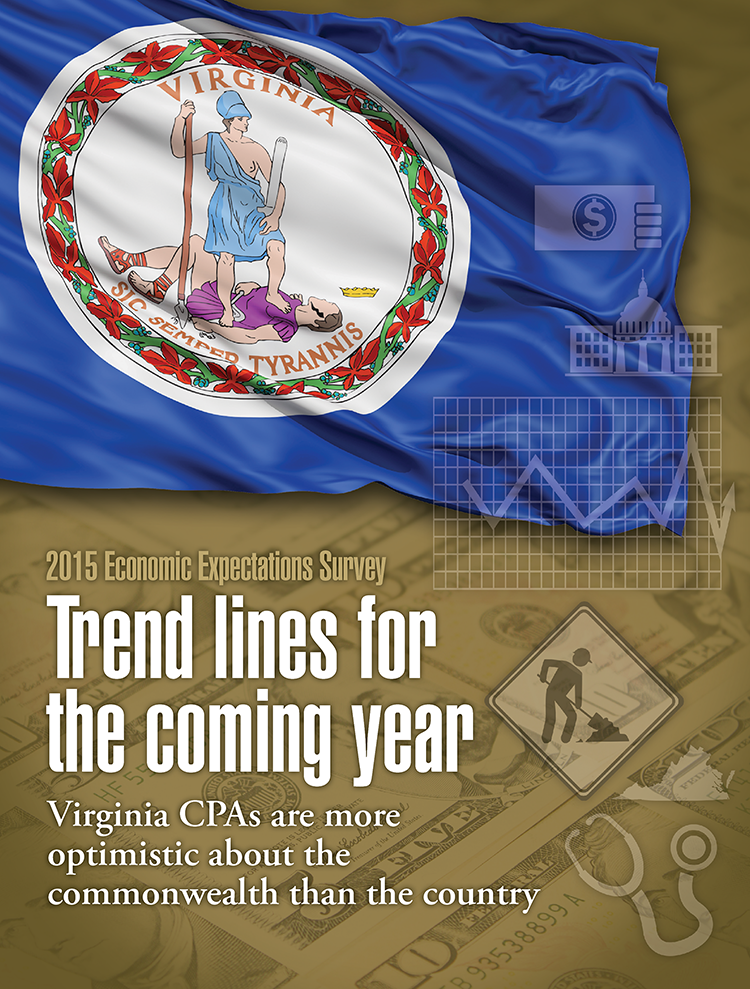 Click here for a copy of the entire Cover Story package.

Click here for a copy of the full 2015 VSCPA Economic Expectations Survey Results.