Engineering school enrollment soars, but recruitment of women and African-Americans remains a challenge

After Vanessa Dyce graduated in May with a degree in computer science from the University of Virginia’s School of Engineering & Applied Science, she started a job as a software engineer for Microsoft in Seattle.

As a child, Dyce was good at math and science but says she didn’t really have a clear idea of what engineering was all about until she attended the Introduction to Engineering summer camp, an outreach program of U.Va.’s Center for Diversity in Engineering aimed at reaching minority high school students like Dyce, who is African-American.

Dyce later attended the center’s BRIDGE summer camp, which eases the transition from high school for incoming U.Va. freshman engineering students. In both programs, Dyce, a Loudoun County native, got a taste of what college work is like, as well as engaging in hands-on projects ranging from chemistry labs and computer coding to flight simulations and 3-D printing.

“I came out of that [first] camp realizing that engineering isn’t just one word that means one thing. … It’s very expansive, and you can do a lot with it,” says Dyce.

With a growing national emphasis on interesting high school students in pursuing STEM careers, enrollment in university engineering schools has been on the rise during the past several years.

“We can’t train them fast enough,” says Barbara D. Boyan, dean of the Virginia Commonwealth University School of Engineering, whose undergraduate enrollment has grown 24 percent in the past four years. “There are way more jobs than there are students that we are graduating.  … All of the engineering schools are ramping up for this. It’s been an amazing explosion; we all feel the excitement of it but we also feel the pressure of it.”

Engineering schools would like to have more students like Dyce.  Despite the explosion in enrollment at engineering schools, recruitment of African-American and female students remains a challenge in Virginia and across the country.  Nonetheless, several Virginia schools have fared well in national rankings examining engineering education diversity.

Outreach efforts
Like the outreach programs Dyce participated in, there are dozens of initiatives to interest Virginia elementary, middle and high school students in engineering.

In May U.Va.’s School of Engineering & Applied Science conducted its first internal survey of such initiatives and found that the school has more than 40 K-12 outreach programs, ranging from individual faculty efforts to national programs such as the FIRST Robotics Competition. 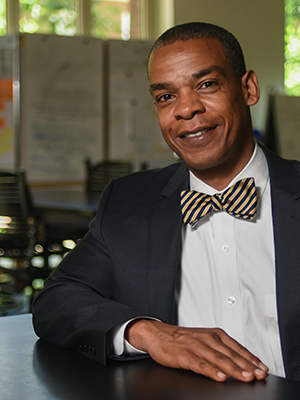 “I don’t think anyone at U.Va. Engineering knew that we had as many programs as we actually have until we did the assessment,” says John Fitzgerald Gates, the school’s associate dean and chief officer for diversity and inclusion. “Our impact is just over 2,000 students a year. We have 2,662 students in our undergrad programs in engineering. … We’re reaching almost as many students in outreach [annually] as we educate here on the Grounds.”

What U.Va. can’t say, though, is how many of those students go on to pursue STEM or engineering degrees at University of Virginia or any other college because that data isn’t being tracked. And the story’s the same at Virginia Tech and VCU.

Nevertheless, Gates and others say that engagement efforts are clearly working, pointing to rising enrollment numbers. “Although we don’t have hard data on it, the anecdotal data is that … the [K-12] students’ exposure to engineering is increasing their interest in all STEM fields,” Gates says. “So, whether they wind up thinking about engineering or not, they are deeply interested in STEM vocations and that really meets a need for the nation.”

While overall enrollment in university engineering programs is growing, the percentage of female and African-American students is showing little change nationwide.  Female students accounted for 19.9 percent of graduating engineering undergrads nationally in 2014, up from 17.8 percent in 2009. Just 3.5 percent of U.S. engineering students earning bachelor’s degrees in 2014 were African-American, down from 4.3 percent in 2013.  ASEE says it is “committed to increasing the participation, inclusion and empowerment of historically under-represented segments of society” in all aspects of engineering.

In tracking diversity, ASEE ranks Virginia Tech No. 11 among schools awarding bachelor’s degrees to women in the 2014-15 academic year with 278. Virginia was 19th with 205 degrees.

“I think engineering is seen as a boys’ club … that it may not be cool to do engineering if you’re a girl … and I think that’s a huge issue,” says Hajela, adding that K-12 schools and teachers need to do more to encourage girls to pursue STEM studies and combat social stigmas by increasing awareness of female role models in engineering and other STEM fields.

Dyce agrees and says that schools should also consider hiring more female and minority science teachers. “My math and science teachers were primarily male. A lot of the engineers I knew of were primarily male. I guess as far as looking for role models, that was definitely lacking,” she says. “Even in our classes … you might be the only girl. … In a class you might be five out of 50. It’s very common.”

As for increasing African-American enrollment, universities are “having a hard time recruiting students,” says Bevlee Watford, associate dean for academic affairs at Virginia Tech’s College of Engineering. Some of that difficulty may be due to the rapidly changing demographics of the United States, she says. The number of  students who self-identify as multicultural or belonging to two or more racial identities is growing. And college marketing strategies may not be changing fast enough to keep up, she says.

“While there might be things that appeal to a black student or help you recruit an African-American or Hispanic student, those same things might not help you recruit a multicultural student,” Watford says.
Gates, who oversees diversity and inclusion programs at U.Va.’s School of Engineering, believes part of the answer for improving the enrollment numbers of underrepresented students could be found in adding more merit-based scholarships.

Early outreach
Another issue is early outreach. Last year, the Virginia Tech College of Engineering hired Kim Lester as its coordinator of pre-college programs. Lester has instituted a pilot program in Montgomery County Public Schools using volunteer Tech engineering undergrad students to conduct lessons with fifth-graders at Auburn Elementary School in an effort to interest them in STEM studies.

“Ideally what we’re looking for is a pipeline from the youngest to the oldest,” Lester says. “It’s getting to the point now that [academic] decisions students make in middle school are going to affect their possibilities later on. If they don’t have the math prerequisites, it may narrow their possibilities they have later on in terms of colleges.”

Dyce, the recent U.Va. grad, also thinks colleges need to do a better job of reaching out to younger students — and casting a wider net. “By high school … students have already decided if they’re turned off by math and science,” she says, and the outreach programs that do exist tend to focus on either high-performing students or those naturally inclined to like STEM courses. “If we were able to catch them earlier, they would perhaps give math and science a better eye.”

Like almost every other state, Virginia has no high school curriculum for engineering. And advanced placement engineering tests for high school tests are still being piloted on the national level.

One possible model for increasing engineering studies in Virginia public schools is Project Lead the Way, a nonprofit founded in 1997 that offers curriculums in engineering, computer science and biomedical engineering to more than 8,000 schools in all 50 states. Many universities, such as the University of Maryland, offer preferential admission policies for students who complete Project Lead the Way programs. However, it’s a fairly new concept in Virginia, clustered mainly in Northern Virginia, and no Virginia university offers preferential admission for its participants yet.

Another testbed for engineering education in public schools is U.Va’s Laboratory School for Advanced Manufacturing Technologies. A joint K-12 education initiative involving  U.Va.’s School of Engineering and Curry School of Education with local school systems, it offers students at some middle schools and high schools in Charlottesville and Albemarle County a contextual process for learning about engineering.

“Some of these new technologies like 3-D printers give kids the opportunity to be more engaged. … Almost everything has a micro-controller in it now. You can make things that do things in the world,” says Glen L. Bull, a U.Va. education professor. “In many cases, if you do it the right way, this is more interesting than sitting in your chair with your hands neatly folded, listening to a lecture.”

The first students to enter the program will graduate from high school in two years, and U.Va. has guaranteed them third-year enrollment in U.Va.’s School of Engineering if they maintain a minimum 3.2 GPA in a dual-enrollment associate degree program.

“Nationally, the workforce and even colleges don’t look like a snapshot of America” in terms of demographics, Bull notes. That’s why it’s crucial to give all children encouragement and exposure to STEM disciplines, he says, not just the high performers.

U.Va’s Laboratory School for Advanced Manufacturing “is not a magnet school. It’s not a charter school. It’s just an ordinary school and every kid gets a shot at this. Some will be interested and some, will not, but we’re trying to level the playing field,” Bull says. “You have to start when all of the kids can have a shot at finding out if this is interesting to them.”