The state of construction

In a nutshell, the outlook for construction in Virginia in 2014 can be summed up in three words: not too bad. While the market remains stubbornly below pre-recession levels — mostly because office construction is practically comatose — certain sectors of the industry are taking up some of the slack.

Multifamily projects, higher education facilities, hotels, medical facilities, restaurants and stores are going up across the commonwealth. In addition, developers are rehabbing many historic and outdated structures.

Ryan Doupe, market research manager at the Newport News-based Ferguson Enterprises, the country’s largest wholesale distributor of plumbing supplies, is optimistic about 2014. “I don’t expect a quick bounce back,” he says. Yet overall he foresees growth in the high single digits.

Nationally, construction investment grew by 3 percent last year, making it the best year since the 2008 economic crash. Virginia, however, saw a 1 percent decline, according to Ken Simonson, chief economist for the Associated General Contractors of America in Arlington. Some of the growth elsewhere in the country was due to the surge in the popularity of natural gas, he says. In Virginia, federal spending cuts have been having an outsized effect on Virginia’s two largest markets, Northern Virginia and Hampton Roads, and that drag is likely to continue.

Tim Boothroyd of McGraw Hill, which tracks building starts nationwide, predicts a $2.1 billion investment in construction in NoVa this year, which represents a 2 percent drop off from 2013, and he expects close to $800 million in investment in each of Virginia’s two other largest markets, Hampton Roads and Richmond. For Hampton Roads, that represents a 2 percent decline; for Richmond, almost a 20 percent decline, largely because of the slowdown in office construction. Boothroyd still considers Virginia’s construction prospects for this year good, though, because, despite the 1 percent decline from the pre-recession high, 2013 was an exceptionally strong year.

Northern Virginia
In NoVa, where the ripple effect of reduced federal spending has resulted in high office vacancy rates, large, ground-up office builds will be few. However, Tysons Corner is showing plenty of activity. With the new Silver Line Metro expected to open early this year, 3.7 million square feet are under construction around the four new Tysons stations. So far, much of the new product has been high-rise residential buildings with about 2,185 rental units recently completed or under construction.

Some new office buildings are going up, too, including a 10-story, $100 million office tower scheduled to break ground in the fourth quarter of 2014. 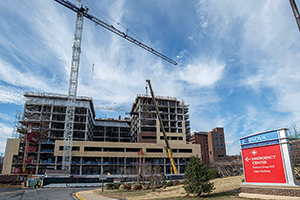 Meanwhile, a continuing, multiphase expansion at Inova’s Fairfax Medical Campus is ongoing with a women’s and children’s hospital slated to deliver in 2015. In Alexandria, a 660,000-square-foot headquarters is underway for the National Science Foundation in the Hoffman Town Center area.

“There’s not many opportunities from the federal standpoint at all,” says Leon Blondin, president of Balfour Beatty Construction in Fairfax. Luckily, he says, “residentially based product is hot and heavy.”

Balfour Beatty is building 700 apartments in Crystal City and also has two buildings under construction on the campus of George Mason University.

Rehab work is another mainstay for Balfour Beatty. It’s doing a retrofit of a 14-story office building at the Hoffman Town Center, which involves replacing the skin and roof and putting in a new lobby, bathrooms and elevators.

HITT Contracting, a large builder based in Falls Church, has picked up jobs modernizing older buildings, too, as tenants demand amenities such as rooftop terraces and fitness centers.

“We have a lot of product from the ’80s that is having to update to be competitive,” says N. Michael Bellusci, vice president for HITT’s institutional section. Last year, HITT did six or seven office updates after doing just a couple in 2012. So far this year, Bellusci already has a backlog of five projects in the institutional sector.

Many properties that HITT updates are in Crystal City, which was left with thousands of square feet of aging space when the Department of Defense vacated because of Base Realignment and Closure Commission (BRAC) mandates.

On the retail side, the biggest story is the impending completion of a Wegman’s, the lynchpin of a 350,000-square-foot retail and office development in Alexandria.

Hampton Roads
As in NoVa, the contraction in  federal spending is keeping the market tight. One bright spot, however, could be the Panama Canal expansion. Simonson, the economist, says the larger ships that will be using the canal will require infrastructure improvements at the Port of Virginia, including longer piers, bigger yards and better rail and road connections. That will mean construction.
Right now, though, the market “is difficult,” says John Lawson, president and CEO of the general contracting firm W.M. Jordan, based in Newport News. “We are doing a lot of nondefense efforts and higher education work across the commonwealth,” he says.

The builder is involved in high-profile hospitality initiatives, as well. He is partnering with developer Bruce L. Thompson on the restoration and expansion of the 87-year-old Cavalier Hotel at Virginia Beach along with a redo of the dowager’s sister hotel across the street. The retrofitting should be completed this fall, with the addition of cottages and estate homes on the hotel grounds planned as the next stage of development. In all, the project, expected to reopen in March 2016, which includes an oceanfront tower, a garage and the refurbishment of a beach club, is expected to cost close to $260 million.

A second joint venture with Thompson, a $26 million, 300-room Hilton Hotel and convention center in downtown Norfolk, will break ground this year.

Lawson also is bully on an ambitious multiuse development based around a research center targeted for 100 acres at Oyster Point in Newport News. The first phase of the $250 million undertaking has a completion date of summer 2015.

Richmond
The most ambitious undertakings in the office market are the 18-story, 315,000-square-foot Gateway Plaza downtown, and a Capital One Data Center that should complete major construction by year’s end. Otherwise, most of the activity in Richmond is in multifamily housing.

W.M. Jordan is teaming with Commonwealth Architects on the high-visibility transformation of the 23-story former Central National Bank into residences envisioned mainly for Virginia Commonwealth University students; about half the units are slated to be ready by summer, with retail planned for the ground floor.

Virginia’s generosity with tax credits for historic renovations is playing a role in that. When combined with federal incentives, “you can get back 45 cents on every dollar,” says Bob Mills, a principal with Commonwealth Architects, “and that can get you some leverage.” Add the rising demand for housing in urban centers and the available stock of buildings to retrofit, and rehabbing old properties for new uses has become a growth business. 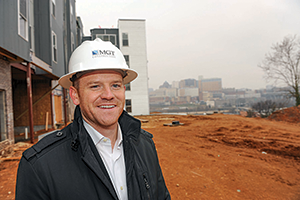 Richmond’s historic Manchester area is seeing lots of action.  MGT has finished up construction of 325 units there and has 526 under construction or due to start shortly. At Mosby Court, it has 151 units in progress, and downtown, it’s converting the 700 Centre building into 174 residential units that should be ready by August.

Like the rest of the state, supermarkets remain a mainstay of retail development. A Kroger’s at Staples Mill Marketplace should finish construction and open this year, and a 74,000-square-foot Martin’s will open midyear at Midlothian Turnpike and Charter Colony Parkway.

Roanoke
In this region, a couple of major mixed-use projects are underway. Following a stall during the 2008 recession, activity has resumed at South Peak, a 60-acre, $200 million retail, office and housing development on Route 220. Some condos already are up and sold, and construction began last summer on a $15 million, 80,000-square-foot Hilton Garden Inn.