Five years ago, Matt Gaffney was living in Washington, D.C., and he wanted a fresh start. “I was fortunate to have a mobile job,” says the 40-year-old crossword puzzle writer. “I just need a computer and an Internet connection.”

Tired of the hustle and bustle of the big city, Gaffney set his sights on a small community with “a slower pace of life, some nice architecture and a few good restaurants.” A Maryland native, Gaffney scouted potential locations within a three-hour radius of the nation’s capital but couldn’t find what he was looking for. After visiting Harrisonburg, a friend suggested he try Staunton, half an hour away.

For Gaffney, the Shenandoah Valley city — with its Southern charm, picturesque setting and vibrant downtown — was a perfect fit. “There’s a lot of culture here in various forms,” he says. “It’s a small community that’s creative and expressive.”

Gaffney not only fell in love with Staunton; he fell for one of its native residents and got married. The couple has a home in the city, and Gaffney is ending a three-year term as secretary of the Staunton Downtown Development Association.
Renovations and the adaptive reuse of many of Staunton’s buildings have captured national accolades. In 2012, Smithsonian Magazine named the city “One of the Best Small Towns in America,” while that same year Travel & Leisure said Staunton had one of  “America’s Greatest American Main Streets.”

In addition to a vibrant downtown — an area that welcomed 33 new businesses in the past year — there’s an expansion under way at the city’s industrial park and a new 300-acre site ripe for development near Interstates 81 and 64.

Downtown’s creative class
“We have a very vibrant downtown that depends on small retailers and startups,” says Amanda Glover, the city’s assistant economic development director. “We’re starting to see an influx of professionals, a creative class of entrepreneurs who are coming to Staunton because they like the culture, they like the amenities, they like the Old World architecture and the small-town feel. People are drawn to the environment that we’ve created here.”

Indeed, at a time when many city businesses are leaving Main Street for suburban shopping malls and other commercial centers, there’s much ado in downtown Staunton. It’s home to the American Shakespeare Center (which is celebrating its 10th anniversary this year), scores of indie restaurants and shops, and the historic Stonewall Jackson Hotel and Conference Center.  According to local officials, there are fewer vacant properties downtown now than in 2006 when the economy was booming.

One of the area’s main draws is that it is walkable. “You can park your car and leave it for the day or the week,” says Glover.  During the summer months, there’s live music nearly every night of the week, and the city stages community programs and events throughout the year to bring people downtown.

Small businesses are leading the charge. There’s the Beverley  Cigar Store, which opened in 2010 and recently expanded its operations. Then there’s Richmond-based Black Swan Books & Music, which opened a second location on East Beverley Street last year. The nearby Meadowbrook Avenue corridor, which at one time was an industrial area, is being revived as a hub for crafts such as stained glass, woodworking and metal sculptures. DuPont Community Credit Union has purchased three lots on Central and Augusta streets on the northern end of town for a future retail location. And in the city’s Wharf district, Rule 42 is refurbishing discarded furniture for resale.

Corrie Park, 36, is one of the newcomers who chose Staunton as a place to start a business. A former high school history teacher in Norfolk, Park and her family discovered the city about five years ago while camping in the Shenandoah Valley. “We came upon this place, and I was blown away. It was the quintessential small town — kind of like a Norman Rockwell painting.”

Her family started making Staunton a regular stop on their vacations. On one of their last trips, Park saw a sign for the Staunton Creative Community Fund, which assists local entrepreneurs with business plans and startup assistance, including loans. “I had always wanted to start my own business,” Park says. “So I set up a meeting with them and they encouraged me to write a business plan.” 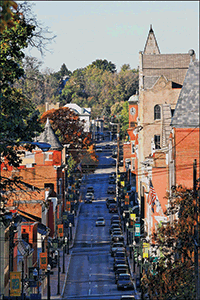 Park’s plan was approved, and her shop, Made: By the People, For the People, held a grand opening Aug. 31. The boutique retailer, at 15 E. Beverley  St., specializes in “hip but affordable” American-made clothing, although Park envisions the business evolving into a modern-day general store with all things Americana.

Meanwhile, on the outskirts of town, the Villages at Staunton is taking shape on an 80-acre hillside campus where Western State Hospital stood for more than a century. The mixed-use development, which launched in 2006, includes urban condominiums, detached homes and office space. Lead developer Robin Miller of Richmond — who fell in love with Staunton during a business trip and now owns a second home there — said four buildings on site have been renovated and are ready for occupancy. After the dip in the economy, residential sales are rebounding. Going forward, Miller sees not only residential growth but new commercial growth as well, including a boutique hotel-spa and an entertainment venue. “We’re very bullish on Staunton in general,” he says. “We’re in year seven of a 20-year build-out and we’re right on schedule.”

Lots of activity at industrial park
Downtown isn’t the only area of Staunton that is thriving. Much of Staunton’s economic growth in the past year came from existing companies.

Cadence, a manufacturer of precision medical instrumentation, was named one of Inc. magazine’s top 10 manufacturers in the country for growth in 2012. The company invested $8 million in equipment and $3 million in expanding its facility in the Green Hills Industrial Park last year. Cadence started in downtown Staunton with two employees as an outgrowth of American Safety Razor and now has more than 300 workers in Virginia, Rhode Island and Pennsylvania. “That’s why we spend so much time with entrepreneurs and startups because they can be the next Cadence,” Glover says.

Similarly, Carded Graphics, which merged with a North Carolina company in 2006, has grown its specialty packaging business in Staunton. The company plans to invest $7 million to expand its local manufacturing operations and create 34 jobs over the next three years. Another homegrown company, Fisher Auto Parts, recently expanded its Virginia distribution headquarters by acquiring the local Unifi manufacturing and warehousing facility.

One of the city’s newest targets for economic development is a 300-acre site at the intersection of Interstates 81 and 64 known as Staunton Crossing. Local officials are targeting large-end users by touting the region’s central location, diversified economy, logistical advantages and strong labor force as well as its cultural amenities. The property is for sale, and development studies are underway.

“We see it as a mixed-use campus with retail on the front 20 acres and then, as you move toward the back, some light manufacturing, research and development, office buildings, even educational facilities,” Glover said. “There’s a wide range of uses we’re targeting at this point. We really see it being built out as a campus.”

Of course, tourism continues to anchor the city’s economy. “We’ve seen good meals and lodging revenue in the past year,” Glover said, and officials like to package Staunton as a hub for exploring the valley. “Visitors make great business prospects,” she said. “If they like Staunton, we’ll ask them, well, do you want to open a business here, do you want to expand your business here?”

Gaffney describes Staunton as “a little cocoon. I never leave it unless I have to.” He spends a lot of time downtown at Newtown Baking and Blue Mountain Coffees, where he can enjoy a snack and a beverage while crafting crossword puzzles for various clients. “I bring my laptop with me when I go, and that’s my office for the day.”