After nearly 30 years, Democrats take the reins of state government.

When the 2020 Virginia General Assembly is gaveled into session at noon on Jan. 8, for the first time in the state legislature’s 401-year history, the person wielding that gavel will be a woman.

The ascension of Del. Eileen Filler-Corn of Fairfax to speaker of the House of Delegates will likely be the most visible of the many changes in store this session for the oldest continuously constituted legislative body in the Americas.

After the pivotal November 2019 elections, voters handed state Democrats control of the General Assembly, placing the party in command of the commonwealth’s executive and legislative branches for the first time in a generation. The election also ushered in the most diverse legislature in the Old Dominion’s history, with a record number of female and minority legislators, including newly elected state Sen. Ghazala Hashmi, Virginia’s first female Muslim legislator.

And now, “there is a lot of pent-up demand” for legislation benefiting the interests of the urban and suburban voters who were instrumental in putting that new Democratic majority in power, says Stephen Farnsworth, professor of political science and director of the Center for Leadership and Media Studies at the University of Mary Washington.

“Rural interests have dominated the conversation” for the last few decades when the General Assembly was under GOP control, but the shift to Democratic power signals substantial changes in regional control as well, notes Farnsworth.

Fronted by a new cast of leaders from Northern Virginia, Democrats are expected to steer the legislature from its traditionally moderate roots toward a more progressive policy agenda.

Political observers predict Democrats will fail to fully meet the expectations of many progressive voters to substantially rewrite labor laws or adopt comprehensive gun-safety legislation but will nonetheless enact a liberal agenda reflecting a backlog of bills that Republicans have bottled up for years.

Initiatives ranging from an increase in the state minimum wage to caps on carbon emissions and even rolling back Virginia’s right-to-work law are given much better chances for serious debate than in recent years.

Many of these topics came up during Virginia Business magazine’s 12th annual political roundtable luncheon, held at the Richmond Omni the day after the election. A panel of four political pundits — Virginia Commonwealth University Professor of Political Science Deirdre Condit, Virginia FREE Executive Director Chris Saxman, Virginia Chamber of Commerce President and CEO Barry DuVal and Tom Walls, executive director of the University of Virginia’s Sorensen Institute for Political Leadership — weighed in on factors that contributed to the Democrats’ extraordinary victory (Trump backlash, suburban demographics) and talked about what’s ahead for the 2020 session.

One of the biggest perks that comes with the Democrats’ historic 2019 win is being in charge of the redistricting process to determine the political makeup of the state’s legislative and congressional districts for the next decade.

Saxman, a former Republican delegate from Staunton, says he sees chances of anti-gerrymandering reform at “50/50. I cannot get a handle on that.”

Walls, however, thinks a proposed bipartisan commission can succeed with overwhelming GOP support. “Some Democrats are committed to the reform plan and will not want to abandon it,” he explains, “while some Republicans may now regard the reform amendment as the best deal they can get.”

Two quick and easy victories for Democrats will be passage of the Equal Rights Amendment and elimination of the work requirement for Medicaid recipients, Condit says.

Passage of the Equal Rights Amendment would come at no political cost as it promises to be a largely symbolic victory followed by an anticipated lengthy court battle over its ratification and enactment, Condit says.

As for dropping the Medicaid work requirement, Gov. Ralph Northam paused Virginia’s negotiations with the federal government over approval of a work requirement in early December, saying the state’s voters had made clear “they want more access to health care, not less.”

Republicans, however, complain that such a move would break the bipartisan pact that led to Medicaid expansion in Virginia. Democrats counter that the work requirement was already falling apart due to lack of federal funding plus uncertainty over potential litigation.

Another top priority for Dems this General Assembly session will be gun safety legislation, which experts say played a big role in November’s elections. The GOP paid a price at the polls for blocking popular gun measures during an aborted special legislative session last July following the workplace mass shooting in Virginia Beach, panelists agreed.

“Overwhelmingly, Americans across the board think universal background checks absolutely make sense,” Condit says. She and other political analysts expect some gun measures to pass this year despite a wave of rural county boards of supervisors passing “Second Amendment sanctuary” resolutions in recent months.

Business issues coming up for legislative debate appear certain to include attempts to repeal Virginia’s right-to-work laws, which unions complain limit their power and organizing ability. However, repeal efforts legislation would likely meet strong resistance from the business community. And even if a repeal bill passed, political experts say, Northam would probably veto it.

Politicos predict much better odds of success for legislation increasing the state’s minimum wage. It currently stands at $7.25 per hour, the federal minimum, and has not been increased in five years.

Progressive Democrats have campaigned on a $15 per hour minimum wage. Democratic bills to increase Virginia’s minimum wage to $8, $10 and $15 an hour died on party-line votes in the 2019 session.

“I think we’ll see a number of wage measures make their way through the General Assembly this year,” says University of Virginia economist and newly elected Delegate Sally Hudson, D-Charlottesville. “How they get packaged together is still to be determined. I hope these questions will get the oxygen they deserve in a crowded session.”

“I think the minimum wage is going to be increased,” says Saxman, who says he thinks a compromise with Republicans on the issue is likely.

“Whatever deal is struck on minimum wage, I hope the business community will get behind … and tag it to inflation going forward and just set it and forget it,” he says.

DuVal says the Virginia Chamber’s top business priority for the state budget this session is education, including early childhood education and increasing teacher pay. “We think we’re going to work well with the majority on that. We had over 1,000 teacher [job] openings when schools started this year; it’s hard to believe.” 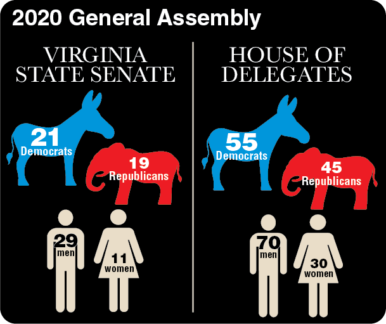 Saxman predicts legislation raising teacher pay and reforming the state’s Standards of Learning will make it to the governor’s desk. Tech talent pipeline legislation also is a top bipartisan issue. Two days after the election, Northam announced that Virginia will invest money to create 31,000 new computer-science graduates over 20 years under agreements he signed with 11 universities.

The new Democratic majorities are slim, and the party’s leadership is sensitive to the concerns of business leaders, so Virginians shouldn’t expect major changes, Walls says.

“Democrats will have nearly two decades of pent-up demand for legislation that they could not pass before, but their margins in both houses of the General Assembly are still not very large, and they now have many members in evenly divided districts, who may hesitate to embrace the most progressive proposals in their purest form,” he says.

Conservative resistance on issues such as eliminating right-to-work will be strong, especially from the business community, but the panelists agreed that the moderate Northam probably will temper and scale back the most progressive legislative priorities.

“I think Governor Northam may be a check on some of the most progressive goals of the Democratic Caucus.  But it’s a new General Assembly and the progressive voters who delivered the Democratic victory will demand, and probably get, some significant legislative results,” Walls says.

Northam has made a remarkable political turnaround, which has been aided by the new Democratic majority.

In February 2019, he was facing widespread calls for his resignation after admitting he had worn blackface in a 1980s Michael Jackson dance contest.

Yet, he has not only survived that political scandal but has re-emerged as a strong party leader.

Rachel Bitecofer, assistant director of Christopher Newport University’s Wason Center for Public Policy, says the center’s latest polling shows that Northam “has weathered the storm. He was at 51% approval in our state legislative poll of likely voters in October.” Given his party’s new legislative majority and a variety of projects he has since undertaken to correct past racial injustices in Virginia, she predicts that the rejuvenated governor is “about to become one of the most impactful and legislatively successful governors in the state’s history. That will ultimately be his legacy.”

“What has driven the blue wave in the last couple of election cycles is college-educated women,” Kidd told a group of Virginia high- and middle-school civics teachers at the annual Virginia Civics Summit in Jamestown. “Virginia is essentially a mid-Atlantic blue state” now, he noted.

And as a result, political analysts say, Democrats will be under pressure from those voters to deliver real change this session.

“If they are smart, they’ll deliver it,” Bitecofer says. “A gun purchase background check bill and minimum wage hikes are going to be key deliverables that would cause major backlash effects if Democrats fail to deliver. I think they can get away with not passing the assault weapons ban and the right-to-work repeal, but these other two are must haves.”

Nonetheless, like Northam, the Virginia Senate is likely to limit the flow of more progressive bills, in part because the Senate has its own priorities, a very narrow (21-19) Democratic majority and more experienced leadership. About 30% of Democratic House members have little legislative experience and most have never been part of a governing majority so that dynamic may also prove problematic to advancing their agenda.

But if voters aren’t happy with the speed of reform, there’s always another election just around the corner.

Bob Gibson is the communications director and senior researcher at the University of Virginia’s Weldon Cooper Center for Public Service. 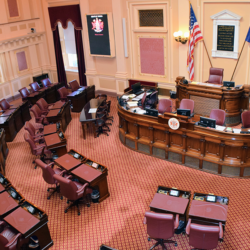 A look ahead at the General Assembly’s 2021 session