Ever since the Affordable Care Act became law nearly five years ago, critics have blasted its employer-mandate rule as an unfair burden for business owners. Those attacks helped win a one-year delay of the new rule — but that year is gone and the first phase of the mandate is now in place. As of Jan. 1, companies with 100 or more employees must offer health insurance to a sizeable share of their employees. Next January, that same requirement will apply to businesses with 50 or more workers.

So, is the mandate an unreasonable burden? Expect to hear a lot of claims this year about whether the rule made health insurance costs go down or up. It’s already safe to say that almost no business has escaped the time-eating task of figuring out how to comply. Plus, the shifting power in Congress makes it likely there will be more attempts by opponents to change the law, even if they probably can’t repeal it. So the uncertainty, at least, will continue.

A couple of points worth noting: First, the mandate isn’t really a mandate — it’s more of an either-or proposition. Employers with 50 or more employees can either offer coverage, or pay a fee known as the “Employer Shared Responsibility Payment.” Second, the full impact of the employer mandate affects a relatively small number of private-sector firms in Virginia. According to the Kaiser Family Foundation, only a quarter of the 172,000 businesses in the commonwealth are big enough to face the mandates taking effect this year and in 2016. And of those companies, 96 percent already offer health insurance.

That includes answering questions such as how to count correctly the number of full-time-equivalent (FTE) employees, what coverage has to be offered, how to count what fees might be owed and so on. That’s what employers above the 100-FTE threshold have been doing all year, and what those with 50-99 FTE employees will be doing for much of 2015. “Employers have a lot more legal obligations on their plate,” Rash says.

The law has affected some hiring, not in a good way, Rash says. New employees are sometimes kept below 30 hours a week, meaning the employer doesn’t have to offer them health insurance or count them as an FTE. Most companies, though, are willing to push through.

“The vast majority of employers want to make sure that they comply with the law, and they don’t really want to just pay a penalty,” Rash says. “They’d rather offer coverage and make it more a part of their advantage for recruitment.”

That’s a big deal, because when the ACA became law “there were some knee-jerk reactions and employers saying they were going to drop coverage,” she says. “But I don’t see the mass exodus that was anticipated.”

A competitive disadvantage?
There are still protests, however. Hugh Joyce, the owner of James River Air Conditioning in Richmond, is one of the ACA’s more vocal critics. He’s lobbied against the law for years and says the ACA is failing to control health-care costs while it is suppressing economic growth. “There is nothing in the law that really helps us get costs under control,” Joyce says.

His company has about 150 employees while his average competitor has about six employees and is exempt from the law. The way the ACA divides companies by the number of employees is unfair, he says.

Competitors “have a 3 to 5 percent price advantage over me,” Joyce says, because they don’t face the costs of providing health insurance. “If health care is so important, from day one why wouldn’t every company be required to provide it, like I am? We’re going to comply, and we’ll make it work. But it’s going to be highly problematic,” he says.

Which begs the question: Why are employers pulled into providing health insurance? The main reason is that many already do, and so the Obama administration decided that one avenue for expanding the number of people with health insurance — the main goal of the ACA — was to get even more employers to offer it.

Joyce says his premiums have increased 50 percent since 2010, and he blames those increases on the new law. There is evidence, though, that the law isn’t driving big premium increases: a 2014 study by the Washington, D.C.-based McKinsey & Co. consulting firm says premium increases in 2015 will be only about 4 percent on average, and that competition among insurers is increasing under the health exchanges.

In March 2013, Joyce testified before a congressional subcommittee on behalf of the National Federation of Independent Business. Like a lot of the critics of the ACA, Joyce thinks it should be mostly repealed, though he would keep some of its rules, such as banning insurers from rejecting people with pre-existing medical conditions, or letting young adults stay on their parents’ insurance policy until they’re 26. Instead, people should buy health insurance on their own and not through their employer. “It makes no sense for me to be buying your insurance,” Joyce says. “I need to pay you a wage so you can buy your own insurance.”

He thinks the government should define what kind of plans insurers can offer, as the ACA does now. And, there should be more transparency about the costs of various medical services so people could shop around. “What we have to have is people buying health insurance like they buy car insurance,” Joyce says.

Hunting for a new plan 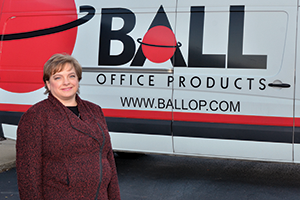 Of course, health insurance plans can be expensive and complicated even for companies not under the employer mandate. Melissa Ball, owner of Ball Office Products in Richmond, has only 23 full-time-equivalent employees and isn’t subject to the mandate. The company always has offered health insurance, and she wants to keep doing so. But every year it gets more difficult, she says.

Driven by premium increases in recent years, she’s gone from traditional to HMOs to high-deductible plans with health savings accounts. She spent the last weeks of 2014 shopping around for a new plan, after learning that her monthly cost for insuring her workers was going from $8,000 to $9,700 each for the same plan she has now. And, as she works through the options of what coverage she can afford to offer, she is finding it necessary to talk with employees about their health issues in order to find affordable coverage. “I don’t want to have that conversation,” she says. “As a business owner, I really would like to not be involved in it.”

GOP proposals
The new Republican-controlled Congress taking over this month is expected to push for changes to the ACA, if not outright repeal. There are various proposals among GOP critics, such as eliminating the individual mandate or the employer mandate. The individual mandate is critical to the ACA because premiums paid by young and previously uninsured people help keep rates lower for everybody else. The employer mandate might be an easier target. Critics say it delivers only a modest expansion in the number of people being insured, and it will cause some companies to lay off workers or reduce their hours.

A 2.3 percent tax on the sale price of medical devices is also under attack, and there is support from both Republicans and Democrats to repeal it. Virginia is home to companies in that sector, such as McKesson Medical-Surgical Inc. in Henrico County, and Staunton-based Cadence Inc. A March 2013 Senate resolution in support of repealing the tax passed 79-20 and was supported by both of Virginia’s Democratic senators, Mark Warner and Tim Kaine. The tax was enacted to help pay the cost of expanding Medicaid and for the tax credits that people can get when buying insurance.

GOP opponents of the ACA are going to court, too. In November the House of Representatives filed a lawsuit alleging the Obama administration exceeded its authority by, among other things, delaying the employer mandate and making unauthorized payments to insurers. The lawsuit may or may not succeed, but it does show how bitter the divide is over the president’s signature law, and that the law’s future is uncertain at best.

The challenges of figuring out the law will fall on even more businesses as the mandate expands to include businesses with 50-99 employees. BB&T’s Rash says that, like it or not, companies will have to work through the various tax implications and requirements of the law. Pretty much every part of a company has to get involved, from human resources to IT services.

After the disastrous rollout in late 2013 of the individual health-care marketplace, uncertainty is running high. “There’s a real leeriness by employers,” she says, predicting that many companies will try to stay close to what their current health plans offer. “They think, ‘I’m going to keep my coverage and see how this plays out. At least I have got some control,’” she says. “I think we’re in a big watch-and-wait mode.”

There’s still plenty to watch for as more components of the law come into play in 2015 and 2016. Joyce admits, though, that many people are tired of talking about it. “Most business people just glaze over when I talk about this. They say, ‘Hugh, you’ve lost, shut up, nobody cares about the Affordable Care Act,’” he says.

The law has succeeded in expanding coverage to millions of previously uninsured Americans, but Joyce argues that the ACA will end up suppressing economic growth. It’s got business people spending time on navigating the ACA rules instead of trying to expand their companies and compete in a global market. The law “is well-intentioned, but it is so problematic that in my opinion it is impossible to fix it.”

Virginia to use federal grant to boost health-care enrollment