With less than a month to go before the soft opening of The Main hotel and conference center, developer Bruce Thompson is seeing his vision for a destination property in downtown Norfolk take shape.  During a tour Wednesday for a small group of hospitality and tourism professionals, Thompson personally led the group around the $175 million property that he says already has booked business from national and international groups.

From the 12,000-square-foot beer garden to a ballroom as big as a football field , the Main defines the meaning of “new,” Thompson says, in terms of a 21st century  gathering place.

“This is my favorite room,” he declared of the fifth-floor beer garden that's outfitted with a huge bar, fireplace, and artificial olive trees. There are rolling garage doors on both sides of the space that lead to outdoor terraces. The beer garden, which will offer live music, will be a spot where people can come at the end of a convention day “to just breathe,” Thompson said.

Although it hasn’t opened yet, the Main, with its Hilton branded hotel and 42,000-square-foot, high-tech, Exchange conference center, already has booked 180 group events. According to Thompson, the business represents 100,000 group room nights over the next two years. Eighty percent of the groups and conferences are coming to the Hampton Roads region for the first time, and Thompson says the exposure will help put the area on the map as a convention destination.

What has surprised him the most, he adds, is that national and international conferences would book the property sight unseen. “I thought people would have to see it first,” he said. “I didn’t think there was that much pent up demand.”

There’s a lot to see in the 22-story, 500,000-square-foot property.  Outside, the main entrance is modeled after the Time Warner building in New York, with floors of glass creating a modern streetscape in this old port city. Inside, scores of workers are cleaning and working on final finishes as the property heads into the home stretch of a March 24-26 private arts fundraising gala that will serve as The Main’s soft opening.

There’s not much furniture yet, and construction debris is scattered on the floor. “It’s still a little barren,” Thompson says.

Still to be hung is a collection of art, with much of it purchased from international art offerings at Art Basel, based in Miami Beach.  Yet, the high-end vibe of the building is present. There are striking art elements, such as a glass ball sculpture hung near the Granby Street entrance and light fixtures both contemporary and historic.

Near the Varia, an Italian restaurant, hangs a crystal chandelier from the old Cavalier Hotel in Virginia Beach. Another  Thompson project, the Cavalier is undergoing a major renovation. The Varia dining area includes a large millwork library with hidden doors in the bookshelves that leads into a room with a black tile ceiling for special events and dinner parties.

While his company, Gold Key | PHR, is busy on both projects,Thompson appears undaunted. He gets construction dust on his suit during the tour and gingerly leads the group on a still escalator on a knee still healing after a replacement surgery 10 weeks ago.

Thompson is an enthusiastic guide. He points out areas such as a wine studio, which will offer a by-the-glass selection of 34 wines.

Overall, the building's color scheme is contemporary with lots of black, gold, cream and gray.  “The building has 62 different finishes,” notes Thompson.

The Main’s grand opening will be held the weekend of March 31 – April 2 and entertainment includes Cirque du Soleil and The Tams band.March 31st – April 2nd. The property officially opens for regular business on April 3rd.

Room rates for a group, on average, run about $150 per night, said Thompson, while the rate for regular transient business averages about $200 a night.  A plush, top-floor presidential suite of rooms with views of Norfolk’s waterfront on the Elizabeth River might go for as much as $2,000.

The property hired 100 people last week, and expects to have 500 employees, including full and part-time, by the time of the public opening

After four years of planning and preparation for the big opening, Thompson says he feels “shocked” when he walks through The Main.  “I’ve never done a 1,800-person dinner before,” he says,  referring to the number of people the main ballroom can seat. “My advice on those nights would be ‘Go some place else to eat for the first two to three months,'” he joked.

Both The Main and the Cavalier Hotel restoration are public/private projects, with Norfolk and Virginia Beach kicking in public funds to get the projects done. The public funding has been controversial, Thompson told the tour group, with some citizens questioning if a hotel and conference center development represented the best use of public funds. Yet the projects would not be getting done, he said, without the public support. 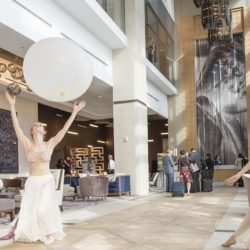