While 2020 represented a significant year for philanthropic shifts toward social and racial justice causes, 2021 and early 2022 have seen a return to traditional giving, with many of Virginia’s largest donations benefiting universities, medical research and the arts.

Donations to Virginia institutions — topped by a $104 million gift in February from Dr. Todd Stravitz to VCU Health to support a new liver research institute — continued to grow during the past year, and some universities marked record donations. An anonymous alumna gave $75 million to Hollins University in December 2021, a three-installment gift that will establish the Levavi Oculos Endowed Scholarship Fund to support undergraduate scholarships, reportedly the largest donation ever made to a women’s university and among the biggest gifts to any Virginia university.

In September 2021, Charlottesville philanthropist Tessa Ader gave $50 million to the University of Virginia toward building a performing arts center with a 1,100-seat concert hall. It will be sited near two other philanthropy-driven projects: U.Va.’s School of Data Science and the Karsh Institute of Democracy. Meanwhile, Virginia Tech received its largest single-donor alumnus gift in December 2021: a $35 million donation from Norris E. and Wendy Mitchell that will help replace Tech’s 60-year-old engineering college building on its Blacksburg campus.

In the art world, part-time Bristol, Virginia, residents Jim and Frances McGlothlin continued their significant support of the Virginia Museum of Fine Arts with a nearly $60 million donation that includes 15 works by American artists, including Norman Rockwell, John Singer Sargent and Andrew Wyeth. This gift follows two other donations by the couple to the Richmond museum, including 73 works of art worth more than $200 million and a $30 million gift in 2010 that made an addition possible. The March donation is also going toward an expansion of the museum that will include a new 170,000-square-foot wing named for the McGlothlins.

In addition to their gifts to the VMFA, the McGlothlins are major donors to their alma mater, William & Mary, and Mountain Mission School in Grundy, where at-risk students from around the world live and attend school.

“I dragged him into an auction one day in New York, the first one he’d ever been to,” she says. “There was a picture that I had fallen in love with by Robert Henri called ‘Listening Boy.’ I said, ‘Oh, I would really love to have that picture.’ I think Jim wanted to get it for me but was a little unsure about how to pay, so he went to the men’s room. He was talking to some other guy who was in there. That guy said, ‘Yes, it’s a great picture. This is what it should go for.’”

Jim McGlothlin put in a winning bid for the painting, which Fran McGlothlin says is “just dear to my heart for so many reasons.” The couple’s main collecting focus was on American Impressionist works between 1890 to 1925.

“It was a first for me,” Jim says of the auction. “It was very interesting to think about the way you made the transactions there with art. Frances was so excited about it. Twenty-five years later, here we are.”

The couple’s connection to VMFA happened later, when Jim, chairman and owner of The United Co. and a backer of the Hard Rock Bristol casino, was a patient at the former Medical College of Virginia hospital in Richmond in the 1990s.

Frances Lewis, co-founder of Best Products Co. Inc. with her husband, Sydney Lewis, who also was a patient at the hospital then, met the McGlothlins in the hallway and talked with Fran McGlothlin about the art museum. Sydney Lewis, who died in 1999, and Frances Lewis were also significant VMFA donors, providing $6 million for the museum’s West Wing and donating 1,500 pieces from their personal collection.

“[Frances Lewis] said, ‘I’d love for you to come over and see it,’” Fran McGlothlin recalls. “She arranged so that the museum was closed. She and I walked through it. I really was impressed and taken by it, talked to Jim and essentially we were off and running.”

VMFA Director and CEO Alex Nyerges, who has led the museum since 2006, says that the McGlothlins’ gifts are “a key reason that VMFA has grown in size and prominence. These added works have bolstered VMFA’s American art holdings and provided important access to American art for present and future generations of Virginians.”

After building their collection, the couple decided to give virtually all their paintings — most of which were displayed in their home — to the museum in 2015.

Fran and Jim McGlothlin visited the museum recently and saw a mother and son talking about one of their paintings. “It was so interesting to get someone else’s take on it and the pleasure that they were getting out of looking at it all,” she recalls.

This is typical of many major philanthropists, who are often driven in part by personal passions and experiences to make donations in the public interest.

“It’s not just about heartstrings but about what people care about,” says Mark Luellen, U.Va.’s vice president for advancement, who is in charge of directing the university’s
$5 billion Honor the Future capital campaign, which launched in 2019.

As of April, the university has fulfilled 80% of its capital fundraising goal, surpassing $4 billion three years before deadline.

Private philanthropy, Luellen says, “is extremely important. It’s really thinking critically about where all those external stakeholders and internal stakeholders connect and how they all link together.” State funding has declined at U.Va. and other Virginia public universities over the decades, and tuition rates were frozen during the past two academic years, although U.Va. and other schools have agreed to increase tuition during the 2022-23 year. That leaves a heavy reliance on private funding at most universities.

One area in which he’s seen greater donor interest recently is in need-based scholarships, a trend that’s reflected at other schools, including Hollins University.

While all types of higher education institutions generally saw lower enrollment amid the pandemic, private, liberal arts institutions have had the most difficult time keeping enrollment levels up. And though interest has increased in single-gender education in recent years, that tends to fluctuate. Just down the road from Hollins, the all-women Sweet Briar College nearly closed a few years ago.

“The higher education landscape is incredibly complex right now, and it has been challenging for quite some time,” Hinton says. “But my hope is that other donors are inspired by this gift. I would celebrate any of our sister colleges getting this gift. I hope similar gifts to other institutions will allow us to really reclaim the power and importance of the liberal arts, the importance of women’s education, and the importance of investing in the missions of those institutions that you care about deeply.”

Noting that billionaire philanthropist MacKenzie Scott’s donations to higher education — notably at traditionally underfunded historically Black colleges and universities  — have made a significant impact in the world of philanthropy, Luellen sees another new trend. “I think [Scott’s] team does tremendous research, and I think that will be a growing trend. It’s setting a tone more quantitative and qualitatively driven than, ‘I went to school here and met my spouse here.’”

Nonetheless, a lot of charity does start at home, as in the case of Norris Mitchell, a 1958 Virginia Tech alum who, with his wife, Wendy, has been a reliable university donor. Last fall, the couple pledged $35 million to replace the aging Randolph Hall, home of Tech’s College of Engineering. Virginia Tech’s Innovation Campus, now under construction in Alexandria, also is a gleaming target for philanthropy and has already benefited from major individual and corporate gifts, but Engineering Dean Julia Ross says that there’s plenty of motivation to give to the home campus.

“Investing in Blacksburg, investing in something like this — that is also supporting the Innovation Campus because it’s allowing us to teach the [undergraduate] students who would then go on to the Innovation Campus as graduate students,” Ross says. “You have to support all parts of the pipeline. You can’t think about them independently. You have to think about them as part of the whole system.”

Editor’s note: This article has been amended to reflect that Best Products Co. co-founder Frances Lewis is still alive. The print version of this story incorrectly reported her death. Virginia Business sincerely apologizes for the error.

Gift of a lifetime 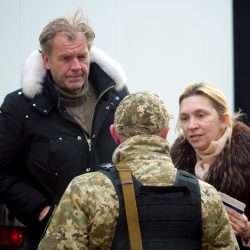 ‘The world is behind them’ 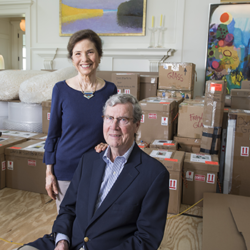