The fate of the American Taxpayer Relief Act of 2012

“We built this Budget around the idea that our country has always done best when everyone gets a fair shot, everyone does their fair share, and everyone plays by the same rules.”– President Barack Obama as quoted on the Office of Management and Budget (OMB) website.
This quote reminds me of a couple of questions.

The first question: “Are we there yet?” A question most parents have certainly entertained and one that I myself have all too often answered my kids with, ‘No, we are not there yet, and I will tell you when we get there.’

The second question: “Is it fair yet?” I had a client ask me this question during a post “fiscal cliff” tax planning seminar last month. The thought of it has intrigued me ever since.

It is fair to say Congress held the spotlight as we rang in the New Year. The political drama regarding the “fiscal cliff” was a constant in nearly all news mediums. The coverage chronicled us going over the cliff at the stroke of midnight on Dec. 31, 2012, then, averting the cliff when the American Taxpayer Relief Act of 2012 (ATRA) was passed by Congress on Jan. 1, 2013, and signed into law by the president the next day.

All of which equates to an estimated $3 trillion tax cut. So in an attempt to tackle the nation’s fiscal woes, leaders from both political parties squandered an opportunity to agree to a “grand bargain” to reduce spending and generate revenue. Instead, they significantly reduced tax on a permanent basis with zero offsetting spending reductions. Can you start to gather the answer to my first question, are we there yet?

Some argue that ATRA has closed the revenue side of the equation and focuses attention on expenditures. This is why we focused on the March 1 deadline, but again, the legislators’ inability to reach an agreement has now triggered automatic spending cuts, also known as “sequestration.” We will have to continue to wait and see if Congress and the Obama administration can agree to enough spending cuts to balance the budget or, if raising taxes (or closing loopholes, depending on your perspective) will be needed.

Looking beyond the “spin” that both parties use to fuel their debate for spending cuts versus raising taxes, the chart below makes a compelling argument that both are needed to truly balance the budget. 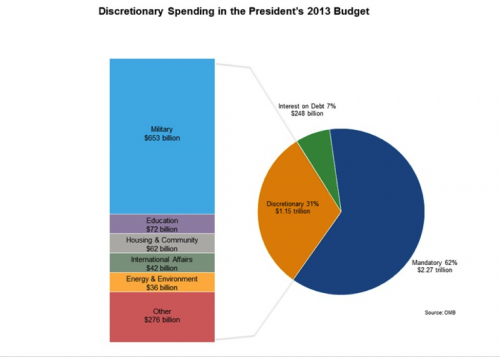 Mandatory spending (Social Security and Medicare) make up 62 percent of the annual budget. Adding the military spending of 18 percent and the interest on our national debt of 7 percent to the 62 percent entitlements totals 87 percent of the entire Federal budget. It’s painfully clear that all of the other Federal agencies combined make up only 13 percent of the funds available. In other words, Congress could eliminate the entire
Federal government and still not put a dent in the $16 trillion debt.

Now to answer my question: “Is it fair yet?” As the former British Prime Minister Sir Winston Churchill once stated, “Americans can always be counted on to do the right thing…after they have exhausted all other possibilities.”  It is my opinion that we are still evaluating possibilities, and it is my hope that we will do the right thing. So, as I tell my kids; “No, we are not there yet, and I’ll let you know when we get there.”

Adrian U. Taylor, CPA, is a manager in the Tax Department of Yount, Hyde & Barbour, P.C.