The evolution of ATMs

The use of automated teller machines is declining because of the popularity of new types of financial technology, but Virginia community bankers say that doesn’t mean ATMs have outlived their usefulness.

Alternative payment methods such as PayPal, Venmo, PopMoney and Zelle give consumers more choices at a time when the number of ATM withdrawals is falling.

Transaction Network Services released a survey in September showing that American bank customers are using ATMs less frequently. The survey found 29 percent of respondents said that they never use ATMs, up from 21 percent in 2015.

Virginia community bankers say they are adapting to customers’ changing habits in their use of ATMs and other services.

Bill Ridenour, senior executive vice president and chief banking officer of John Marshall Bank in Reston, says it went through an operating system conversion a couple of years ago “to be able to offer more capabilities for more mobile banking.”

New features
While ATMs used only as a cash dispenser are going “by the wayside,” smarter machines are taking their place, says Steve C. Yeakel, president and CEO of the Virginia Association of Community Banks (VACB). “The ATM is in evolution. Manufacturers are adding features,” he says.

For example, interactive teller machines (ITMs) look like ATMs but offer videoconferencing. They allow customers to talk with bank employees about their accounts, just as they would in a teller line.

A recent survey conducted by Fiserv Inc., a financial services technology provider, shows customers have an appetite for other ATM features. 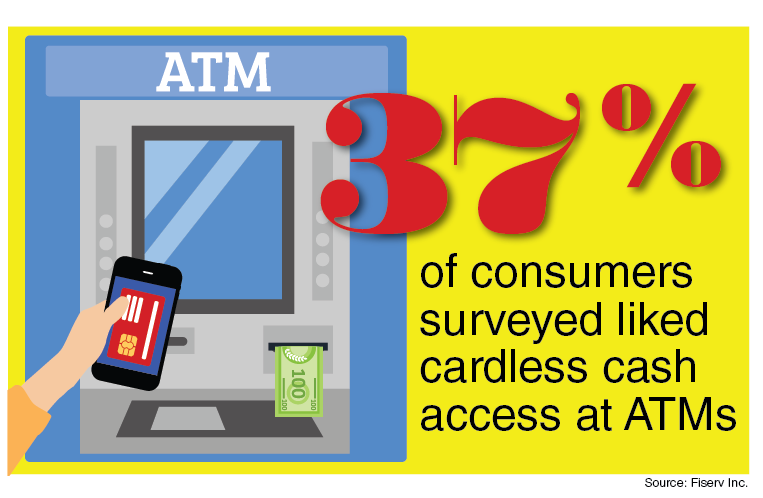 For example, nearly two in five consumers (37 percent) in the survey liked cardless cash access, in which smartphones instead of bank cards are used to withdraw money from ATMs. More than half of the millennials responding also favored cardless access, which is being offered by an increasing number of banks throughout the country.

Some consumers continue using cash for the sake of privacy. John Fruit, senior vice president for card services and e-channel support for TowneBank in Suffolk, notes that, “as we continue to see privacy concerns in the news — think Facebook — we should expect there to be a segment of the population that will want to use cash in an effort to keep their transaction history private.”

Branch alternatives
As some banks close branch offices to reduce costs, ATMs can offer a way for them to maintain a presence in various locations.

“If you’re looking to brand yourself, the way a branch raises a flag, an ATM does that to some extent,” Yeakel says.

While there may be a decline in the number of ATMs, “I do not think we should expect it to be at the same rate as branch closures,” Fruit says, because financial institutions can move the “cost-cutting” needle more by closing a branch than by closing an ATM.

“Replacing branches with full-function ATMs and placing ATMs in locations where they might have a particularly high density of cardholders …  is certainly a way to keep expenses low while at the same time offering some flexibility to the customer base,” he says. “The idea of the ATM as a brand extension is really on a case-by-case basis.”

Young customers
The suspected role of younger customers in the declining use of ATMs is exaggerated, say community bankers.

“Clearly, younger customers have grown up using smartphone technology, and they’re not going to want any bank that does not have that technology,” Ridenour says. “But the [generational] divide is a little overblown.”

A 2016 BI Intelligence survey found that 44 percent of millennials were unwilling to stop using cash, even if electronic payments could replace all cash transactions.
In fact, says Yeakel, the biggest group to move away from cash is the 35-to-54 age bracket. “Younger middle-age folks are more tech savvy and have more to gain from efficiencies,” he says. Customers younger than that “are more interested in managing their budgets in a simple way” and “many

use cash as a budgetary method.”

The big trend among younger customers is peer-to-peer payments, says Brian K. Plum, president and CEO of Blue Ridge Bank in Luray who is chair-elect of the VACB.

“People can send money to other people without having to go through a true financial institution. That’s probably one of the biggest generational differences,” he says. “People are keeping money in non-bank arenas that are not FDIC insured. If something happens, it’s questionable whether you get your money. There’s more risk. Do they know the risks? I don’t know.”

Promotional opportunities?
Do fewer ATMs hurt a bank’s ability to promote itself?

Ridenour says John Marshall Bank has never really relied on ATMs to promote its services. “We don’t feel it’s effective to have customers having to look at bank messages before they can get their cash. We communicate with our customers through email, bank statements and face to face.”

Customers aren’t looking for commercials, Fruit agrees. “It is hard to imagine people getting excited while reading about a new CD promotion, a [home equity line of credit] rate or any other promotion a bank or credit union may want to offer.”

Customers today see ATMs as “an appliance,” he says. “People want to get to the ATM, complete a transaction and get on with living. They want the transaction to be as fast and painless as possible.”

Botetourt County bonds get an upgrade