VCU has a been a big factor in Richmond’s revival

Editor’s note: This is part of an ongoing series looking at Virginia’s colleges and universities as economic engines.

When Greg Wingfield, the outgoing president and CEO of the Greater Richmond Partnership, was studying urban planning in the 1970s, the future of American cities seemed bleak.

“The forecast was that they would become hollowed out. People would continue to move to the suburbs and beyond, leaving only the poor. Thought leaders were saying you could write off cities,” Wingfield says.

Meanwhile, the downtown retail core was imploding, with the closing of the city’s two legacy department stores, Thalhimers and Miller & Rhoads.

Even worse, Richmond was becoming known as a murder capital. In 1994, Richmond ranked second in the nation in per-capita homicides with 161 killings.

The city seemed on the cusp of the abyss.

Today, however, Richmond is growing again with an influx of millennials and baby boomers, among others, who are embracing an urban lifestyle.  The city’s population stands at approximately 214,000, having added about 10,000 residents since 2010.

Violent crime also has declined, with 42 homicides recorded in 2014. 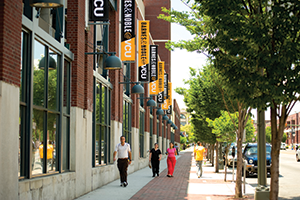 Many circumstances and individuals have helped turn the city around. But one entity that has been singled out time and again in the city’s revival is Virginia Commonwealth University, an anchor for Richmond in good times and bad.

In 2002, for example, VCU was cited along with Columbia University by CEOs for Cities and the Initiative for a Competitive Inner City for leveraging its resources for urban economic revitalization.

In 2006, the New England Board of Education released a report, Saviors of Our Cities, in which VCU was ranked eighth in a list of the top 25 “Best Neighbor” urban colleges in the country.

For years, VCU has been the city’s biggest employer, currently with about 15,000 on the payroll at the university and its health system, according to the most recent figures.

A 2010 study by Richmond-based Chmura Economics & Analytics, placed the university’s annual economic impact in Virginia at $3.6 billion. University officials say it has climbed an additional $100 million since then.

When you consider operating expenses, capital expenditures and spending by employees, students and visitors, VCU supports more than 43,000 jobs statewide, according to Chmura.

VCU, which enrolls more than 31,000 full- and part-time students, is also the city’s biggest developer with campuses on both ends of downtown’s most expansive thoroughfare, Broad Street.

VCU has the No. 1 ranked public university arts and design program in the nation, according to U.S. News & World Report, and its school of the arts has become a beacon for art and culture in the region.

The Broad Street area near the VCU arts school has blossomed with galleries and art-related events. In 2012 the city designated a portion of the Broad Street corridor as an arts and culture district, in recognition of the exploding art scene.

The VCU Medical Center, one of the focal points of local health care, is the site of the region’s only Level 1 trauma center.

Wingfield credits VCU, his alma mater, with being an indefatigable engine of economic development. “It continues to be the kind of creative hub that draws people to the city,” he says.
The story is in the numbers. Between 1990 and 2009, VCU grew from 21,000 students to more than 30,000. During that period, the university played a leading role in about $2.2 billion in new investments, according to university accounts.

Reshaping downtrodden areas
Much of that investment was poured into downtrodden or underperforming areas of the city.  Along one portion of West Broad Street, for example, a campus bookstore, a new school of the arts, student dormitories and a recreation and convocation center arena replaced closed empty storefronts and parking lots.

A major grocery store soon opened in the same area along with a home improvements center and a wave of private housing to accommodate VCU’s surging student population.

VCU erected engineering and business schools in an area of the city along West Main Street that municipal planners had long labeled an eyesore.

Today, VCU is building a $35 million contemporary art center on a major gateway to the city, at the corner of Belvidere and Broad streets, adjacent to the arts district.

Along Grace Street, where biker bars and an X-rated theater reigned two decades ago, VCU is building a student-centered avenue.

In still another underperforming area further downtown, the university opened a biotechnology park. The park has grown and thrived as an incubator for startups.

On VCU’s medical campus, a new $168 million children’s outpatient clinic is under construction.

That comes on the heels of the opening in 2013 of the 12-story McGlothlin Medical Education Center, which expanded physician training and provided the impetus for the medical school’s most ambitious curriculum overhaul in three decades.

Trani’s vision
Before he left VCU’s presidency in 2009 after nearly two decades in office, Eugene P. Trani was a powerful advocate for VCU’s expansion. He was eager to show how collaborative a university could be, especially in the area of economic development.
Trani became the first VCU president to simultaneously chair the regional chamber of commerce.

During his 19 years as president, he oversaw vast infrastructure improvements. Wingfield and others regard him as a visionary leader who was able to develop a strong rapport with business interests and donors who shared his vision.

In a brief interview, Trani said that once the biotechnology park and the engineering school were established early in his tenure, support for more progress and growth followed. “The momentum really got going,” Trani says, and then it swelled beyond even the most optimistic predictions.

When Michael Rao became VCU’s president in 2009, the fortunes of the nation and the state were changing dramatically.  He arrived in Richmond during one of the worst recessions in the nation’s history. He also faced about a $63 million loss in state support over the next few years.

VCU had to recalibrate its strategic plan — and about everything else — to cope with an unsteady funding landscape in higher education. The university’s change in course meant a shift from focusing on significant enrollment growth to focusing on program excellence.

“I think VCU’s building itself to a critical mass was the right thing for many years,” Rao says, with a nod toward Trani’s leadership.

Continuing evolution
Although he has been dealt a different hand, Rao believes VCU will continue to be a strong economic engine for the region.

The VCU president sees an avenue of opportunity along the Broad Street corridor that separates VCU’s two campuses. “I remember my first drive on Broad Street. I saw a beautiful street that had hit hard times that could really spark strategic growth and improvement,” Rao says.

He anticipates that VCU will seek out strategic partners to help develop the Broad Street corridor as needs evolve.  Rao says retail development in the corridor would give students and employees an opportunity to buy locally and would help re-establish the downtown as a place to shop.

Completion of the Institute for Contemporary Art also is expected to further enhance the city’s Arts District and VCU’s pre-eminence in the arts.

One of Rao’s priorities has been to encourage VCU’s students to take a full load of college credits, so they can graduate sooner.

With more graduates, VCU’s value to the community increases, he says, as those graduates take jobs and add to the economy. “Back in 2008-09 we had 6,000 graduates [annually]. Today, it’s almost 7,500 graduates,” Rao says.

The updated master plan also envisions hiring about 500 more faculty members to help eliminate bottlenecks to graduation and upgrade academics across the board.

Rao says the thrust of his fundraising efforts will be focused on investing in people.  “We need endowed chairs and professors more than at any time in our history … and, scholarships for our students,” he says.

Recent VCU graduates, many of whom are the first members of their family to go to college, have averaged some of the highest debt loads among public universities in Virginia, according to an annual survey by the Project on Student Debt.

The average debt per graduate in 2013, for example, was $29,462. Graduates of some private Virginia colleges carried debt loads in the low- to mid-30s.

Rao says VCU alumni who have achieved extraordinary success in life are now interested in seeing their alma mater rise in reputation, in terms of people and performance.

“The addition of [the South Hill hospital] confirmed our role in the state,” Rao says.

As Virginia’s largest provider of indigent care in the state, Rao says, VCU’s health system has a role to play in delivering health care across regions. The debate about expanding Medicaid in Virginia is much on Rao’s mind these days.
Statewide, many Virginia hospitals have been lobbying the General Assembly to expand Medicaid.

Doing that, they say, would help them provide better care to low-income patients and compensate for millions of dollars in Medicare payments they lost with the implementation of the Affordable Care Act.

Rao says he doesn’t know what the outcome of the discussions over Medicaid expansion will be, but he expressed hope that state legislators will find a path forward to provide health care to all Virginians.

When business prospects come to Richmond looking to possibly invest, he says VCU’s presence is a confidence booster in the city’s future. “VCU is putting its own dollars down. They’re doing their own economic development,” Downey says.

Like Rao, Downey believes that the Broad Street corridor between VCU’s two campuses is ripe for development, and it’s fast becoming a nexus for future town-gown cooperation.

“It’s an area that the city has a lot of interest in revitalizing and bringing back to life. VCU also has a vested interest in that corridor. It’s something we’re working together on in lockstep,” Downey says.