With construction beginning this fall to expand the Hampton Roads Bridge-Tunnel (HRBT), relief is on the way for travelers weary of sitting in traffic jams along one of south-eastern Virginia’s most congested corridors.

The $3.8 billion expansion is the largest project in the history of the Virginia Department of Transportation and one of the largest infrastructure projects in the nation. It will also employ new tunnel-excavation technology that has just begun to be used for major roadway projects.

Twin two-lane tunnels, about 50 feet deeper than the current tunnels, will be constructed just west of the existing eastbound tunnel, while more than two dozen marine bridges will be replaced.

Additionally, the four-lane sections of the Interstate 64 corridor between Settlers Landing Road in Hampton and the Phoebus shoreline and the four-lane section of I-64 in Norfolk between the Willoughby shoreline and the I-564 interchange will be widened to six lanes, with the addition of a third lane and a drivable shoulder in each direction. When the project is completed in late 2025, there will be a total of eight lanes of capacity across the water.

The Hampton Roads Transportation Accountability Commission is the main funding agent for the project, using local revenue from sales and gasoline taxes in the Hampton Transportation Fund. State and federal funds will also support the expansion.

Along with increasing capacity and safety and enhancing the region’s emergency evacuation readiness, the multifaceted project is expected to improve travel time reliability. On a daily basis, commuters face an average six-mile backup to cross the Hampton Roads harbor. “You just never know if it will be 15 minutes or 50 minutes to get through the HRBT,” says James S. Utterback, VDOT’s director for the HRBT expansion project. “The value of the new facility is that drivers will have a much more predictable time to get through this corridor.”

When it opened in November 1957, the original 3.5-mile bridge-tunnel joining the Peninsula and Southside Hampton Roads was the world’s longest immersed tube tunnel and the first crossing constructed between two manmade islands. As the region’s population and traffic grew, construction began on an eastbound tunnel in 1972. The parallel tunnel opened in November 1976.

Four decades later, capacity has long been maxed out. Approximately 32.5 million motorists traveled across the HRBT in 2019. During the summer alone, an average of 100,000 vehicles cross the span daily. Maintaining traffic flow during construction is a major concern, says Utterback. “That’s going to be a big challenge related to the construction of the trestle bridges and the number of switches that will be occurring over the water.” To reduce long-term travel disruption, construction work on the tunnel, bridges and interstate will occur simultaneously. All lanes will remain open as construction along I-64 starts this fall.

Right-of-way along the corridor represents another challenge.

“There are so many historical properties that we can’t impact,” Utterback says. “That limits the corridor we can build on.” VDOT has committed to ensuring that the construction does not impact Naval Station Norfolk, the Willoughby Boat Ramp, Hampton University, Fort Monroe, the Hampton National Cemetery, Phoebus Historic District, Fort Monroe and Fort Wool.

Hampton Roads Connector Partners (HRCP), a joint venture led by New York-based Dragados USA Inc. and including Vinci Construction, Flatiron Construction Corp. and Vinci subsidiary Dodin Campenon Bernard, was chosen as the design-build contractor for the project. The project’s designers are Arlington-based HDR Inc. and Mott MacDonald, a British firm with a global presence. During the spring and summer, workers relocated utilities on South Island and shifted lanes on the south-approach trestle, with North Island expansion slated to begin in October. Widening is scheduled to begin on the Willoughby Bridge in January 2021, followed by replacement of the north and south trestles in February and widening of the Oastes Creek Bridge. The Mason Creek Bridge is slated to be widened and the Mallory Street Bridge replaced in March and April 2021.

The tunnel construction will mark only the fourth time that a tunnel boring machine (TBM) will be used on a tunnel roadway project in the United States. Other bored tunnels are in Seattle and Miami, as well as the Parallel Thimble Shoal Tunnel currently under construction at the Chesapeake Bay Bridge-Tunnel. Measuring the length of a football field, the TBM will excavate the tunnels, creating an approximately 45-foot-wide opening, the second largest in North America. The machine’s front end consists of a 46-foot-diameter rotating cutterhead that bores through soil and rock strata. HRCP has contracted with German firm Herrenknecht AG to design and build the machine for $101 million.

“We have a team of professionals who are used to this technology,” says Jose Martin Alos, HRCP’s project executive for the tunnel expansion. “That was key to our decision to use a tunnel boring machine.”

Technological advancements in the last decade have made the TBM a feasible option for cutting through the sandy soil found on the bottom of Hampton Roads Harbor. “It’s a hard-rock boring machine, but its ability to get through soft ground, like what’s found on the bottom of the sea, is a little more difficult,” Utterback explains.

The shaft at the tunnel’s entrance  is deep enough to reduce the likelihood of encountering boulders on the way down, allowing the TBM to move under rock instead of through it, Alos adds. “The depth of where the tunnel starts is a little deeper on this project, and there are no expectations we will find any complications.”

Unlike the immersed tube method for tunnel construction, the TBM ensures less exposure to weather and wave action and is less disruptive to the environment. Additionally, since it works underwater, the machine will not encounter delays due to commercial and military use of the shipping lanes, the primary reason HRCP decided to bore the new HRBT tunnels. “You don’t have to worry about getting into the federal channel,” Utterback notes. “Basically, the tunnel boring machine will be going underneath it. It can work 24 hours a day under the bay, and you won’t see anything.”

Following an approximately four-month overseas journey from Germany, the TBM is scheduled to arrive in Hampton Roads during fall 2021, along with workers who will reassemble it in a 75-foot-deep pit on South Island and train HRCP’s crew to use it. “It will take four to six months to assemble it,” Utterback says, adding that the TBM could be launched from South Island as early as February 2022. Once the machine gets underway, a hydraulic cylinder will move it about 50 feet per day down to the stratum of sand and clay known as the Yorktown layer while the cutterhead bores a two-lane tunnel to North Island.

Upon reemerging at North Island, the machine will be rotated on a specially built turntable for its return trip, boring the parallel twin two-lane tunnel to South Island. “We estimate that it will take 10 to 12 months for the tunnel boring machine to go from South Island to North Island and about four months to turn the machine around and almost one year to return to South Island,” Utterback says. “A lot of that depends on the geotechnical samples to understand soil properties. We really won’t know until we actually get into it.”

HRCP is hiring approximately 300 staff members to manage the project, as well as 1,200 skilled craft employees working as crane operators, carpenters and other labor positions. “There will be all kinds of opportunities for apprenticeships and on-the-job training as the project grows,” Alos adds.

The new tunnels will carry all eastbound traffic, with one tube earmarked for general purposes and the other having a full-time HOT (high-occupancy toll) lane and a part-time shoulder lane. Tolls will be set toward the end of construction. Meanwhile, the existing eastbound tunnel will be modified to carry westbound traffic. “We’ll have eight lanes over the water — four lanes in each direction,” Utterback says. “That will be a tremendous help to the traffic situation.”

Fairfax County-based engineering consulting firm Dewberry will provide quality assurance services for the project, working alongside VDOT and HRCP to ensure equipment is calibrated and tested and materials installed to meet project specifications. “Dewberry’s role is one element in a multilayered quality assurance program,” says Doug Frost, a senior vice president with the firm. “Everything that goes into this project will be checked and double checked to make sure the proper materials are used and installed correctly.”

A different type of quality assurance is already playing out on South Island, where 20 trained border collies have been redirecting thousands of migratory seabirds, including royal terns and gulls, away from their longtime nesting grounds, which HRCP is paving to use as a staging area for the tunnel boring machine and other equipment. Earlier in the year, VDOT brought in the dogs and their handlers from Charlotte, North Carolina-based wildlife control company Flyaway Geese to patrol the island and coax the birds to move to new, safe nesting grounds prepared for them on floating barges and at Fort Wool, a 200-year-old nationally registered historic site off South Island.

“The contractor has a bird management plan to protect the island and the birds,” Utterback says. “The border collies are a key component of that plan.”

The dogs arrived in February and will remain until early October. They are outfitted with reflective vests and goggles and boots to protect them against sun, sand, asphalt and weather. Because it takes up to three nonviable nesting seasons for birds to change their migratory habits, the dogs will return each season for the next several years. While the birds consider the dogs predators, the border collies have a no-kill instinct and do not pose a threat.

“They won’t touch the birds,” Utterback says. “Their presence will keep the birds at bay.”

Flights suspended as of September 2020 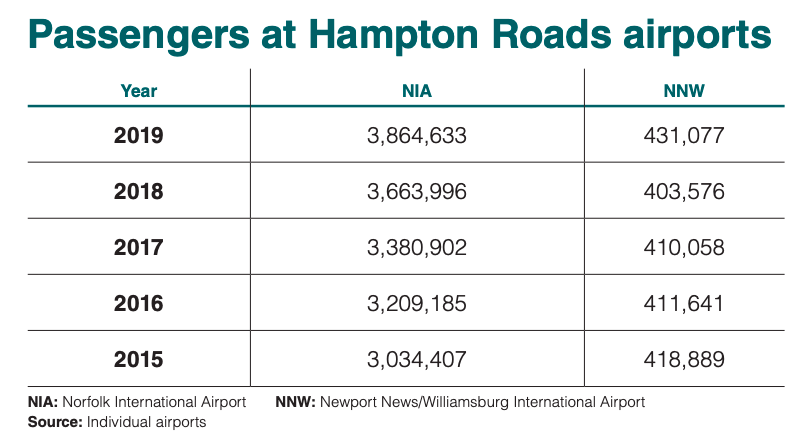 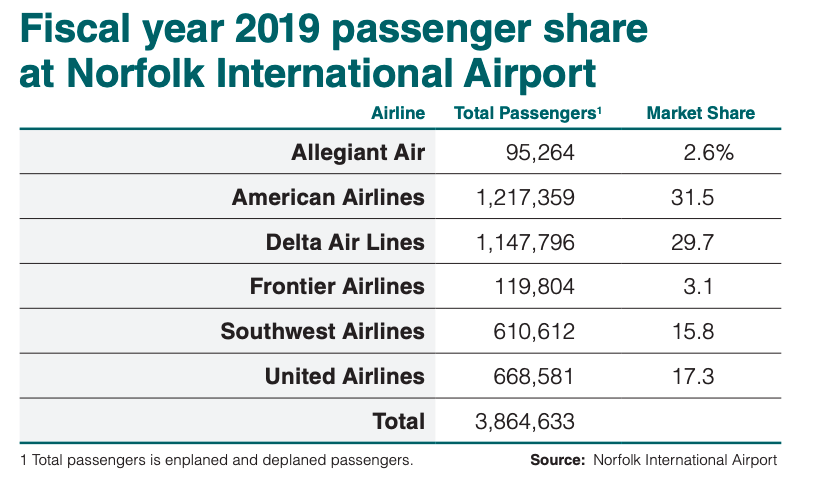 By land, sea and air