The $66 billion merger of BB&T Corp. and SunTrust Banks Inc. is expected to dramatically change Virginia’s banking landscape — and the repercussions may prove surprisingly beneficial for the commonwealth’s community banks.
Combining regional powerhouses BB&T and SunTrust under a new name, Truist Financial, makes sense in terms of efficiency and cost savings, banking experts say. But the all-stock deal — creating the sixth-largest U.S. bank, with assets of $442 billion — will affect Virginia banking for a long time, they predict.

“Virginia is ground zero for overlays,” says John Asbury, president and CEO of Richmond-based Atlantic Union Bankshares Corp., referring to overlapping operations of BB&T and SunTrust. “The merger has sweeping implications for Virginia — causing a multiyear disruption — and it’s perfect timing for us.”

The fallout, which will include divestitures, branch closings, layoffs and other disruptions, will bring opportunity for community banks. And as Virginia’s largest independent bank, Atlantic Union is positioned to be one of the “bigger beneficiaries of this merger,” according to an April investment report from research analyst Laurie Hunsicker, managing director of Washington, D.C.-based Compass Point Research & Trading LLC.

The company recently completed mergers extending its footprint across the commonwealth, creating what Asbury has described as the first statewide, Virginia-based regional bank in 20 years.

Announced in February, the BB&T-SunTrust deal — one of the largest in more than a decade — is expected to close in the fourth quarter of this year, pending regulatory approvals. However, due to federal antrust laws,  the big banks must divest of $1.3 billion in deposits, including $432 million in Hampton Roads.

“We’re concerned about reducing competition in certain markets,” says Adam Drimer, assistant vice president at the Federal Reserve Bank of Richmond, discussing divestitures in general. “We don’t want a situation where one bank acquires another and creates a monopoly.” 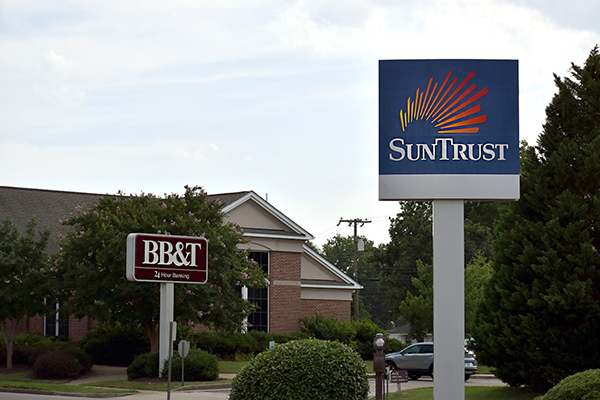 Half of the 282 overlapping BB&T and SunTrust branches in Virginia — those within two miles of each other — are expected to close, according to Atlantic Union’s calculations, and hundreds of jobs will be eliminated. That development is expected to create opportunities for Virginia banks like Atlantic Union to add customers, pick up or expand branch locations and hire talented people.

An estimated 740 branches will be shuttered across the SunTrust-BB&T footprint, which extends from Pennsylvania south to Florida and west to Texas.

Besides Hampton Roads, other Virginia areas that will be impacted by BB&T-SunTrust divestitures include Charlottesville, Roanoke and Martinsville, according to Atlantic Union data.

In a move that will take place during the next two years, Richmond will lose the SunTrust Mortgage headquarters to Greensboro, North Carolina.

SunTrust spokesman Mike McCoy declined to say how many jobs would be affected. However, the combined bank is expected to maintain a “significant presence” in its mortgage operations in Richmond, he says.

In shedding deposits, the banks will devise a divestiture plan, which must be approved by regulators, including the Richmond and Atlanta Federal Reserve banks as well as the Fed’s Board of Governors in Washington, D.C.

“They tell us what they want to do,” Drimer says. “We review it and sign off or tell them it’s not acceptable.”

“Regulators will go to great lengths to make sure banks don’t cherry-pick and sell their least-valuable deposits,” Asbury says.

Nonetheless, that practice may not be possible in this case. Large community banks likely will bid on the deposits, he says.

“When you have a merger with two banks of this size, it creates a lot of stir in the industry,” says Bruce Whitehurst, president of the Virginia Bankers Association. “Small banks are paying attention to how this will shake out. They see a strategic opportunity to acquire some of those branches.”

Atlantic Union doesn’t expect to purchase shuttered BB&T and SunTrust branches, Asbury says, but it’s closely watching for opportunities to “selectively upgrade” its own branch locations and incrementally expand business in markets where it’s currently competing with the bigger banks.

BB&T and SunTrust say they are too early in the merger process to determine how they will accomplish the divestitures.

“We know there are many questions, and we’re still very much in the planning stages,” says BB&T spokesman David R. White. “We announced the deal in February, and the companies won’t legally come together until much later this year. This is a long journey, and we’ve got a lot of work to do with our new teammates over the next several months.”

The stock market appears to like the transaction, with company stocks initially responding favorably. Even so, the deal is not likely to set off a wave of mergers and acquisitions, banking experts say.

It may cause some people to think about partnering with banks of comparable size, Aston says. “But it doesn’t offer much of a catalyst for mergers and acquisitions.”

In the meantime, it is business as usual for BB&T and SunTrust customers, White says.

They will be given ample notice of any changes, including whether their deposits are sold, he says. (Deposits include savings, checking and money market accounts, encompassing all interest- and noninterest-bearing accounts.)

Statewide shake-up
“No state will have more of a combined presence than Virginia,” Asbury says of the pending merger.

The deal is expected to shake up the leadership of Virginia’s banking market. BB&T currently ranks second in deposit market share in the commonwealth, while SunTrust is No. 4. After the merger, Truist will be No. 1 in Virginia, holding 25% of all deposits (or 25 cents of every $1), followed by Wells Fargo at No. 2 and Bank of America at No. 3.

“No one is close,” Asbury says about the local position of Atlantic Union. “We clearly will face off against the three largest positions.”

Atlantic Union executives say they don’t plan to bid on the divested deposits for multiple reasons, including the fact that “there’s nothing to stop those customers from going back if they choose to do so, ” Asbury says.

And it’s also more than likely that BB&T and SunTrust will sell those accounts to an out-of-state bank instead of to a competitor like Atlantic Union, he points out.

However, in the merger’s aftermath, Atlantic Union does expect to gain customers and employees who prefer smaller financial institutions and local decision-making. “We do a good job growing the company organically one customer at a time,” Asbury says.

Community banks generally are more receptive to customer needs than larger national banks and have the ability to tailor solutions to situations, Engelke says. “Many times, large organizations have a cookie-cutter approach to smaller customers.”

Some BB&T and SunTrust retail banking customers in Virginia originally came from local banks like Crestar (a SunTrust acquisition), Asbury says, but now their bank is changing “into something that has clearly more of a national scale. ” And Atlantic Union sees an opportunity to sell those customers on a more localized experience.

A market tracking survey conducted this year by Greenwich Associates found that nearly 80% of potential customers in Atlantic Union’s market would consider switching to the bank.

J.D. Power ranked Atlantic Union the No. 1 Mid-Atlantic bank for customer satisfaction in April. And as a Virginia-based bank, “the buck stops here, ” he says. “We’re not taking orders from some far-flung headquarters. We understand these markets. We live here. ” 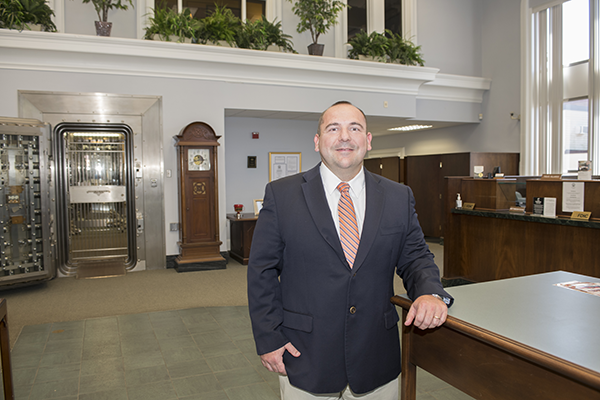 Small and midsize business customers will be most affected by the merger, says Brian Plum, chairman of the Virginia Association of Community Banks and also CEO of Blue Ridge Bank in Luray.

Commercial relationships are highly personal, Plum says, noting that business owners often are more loyal to the bankers they work with than the banks themselves. “Most will follow those individuals if they leave one bank for another.”

The migration to other banks will take place over years as business loans mature and as companies refinance their debts, Plum says.

“Community bankers know their business communities, and they know their target audience,” he says, adding that bankers have been having conversations with customers about the ripple effects of the merger since the day the deal was announced.

Business owners in general wonder whether their business models will fit the new structure, Plum says, but he believes most individual customers will be unaffected by the merger.

Retail deposit holders tend to stick with their banks, since most do online banking and switching banks is seen as a hassle, industry experts say.

Even so, a bank can sell a customer’s deposits but can’t force that customer to stay with the buyer, Aston says, adding that retention rates are questionable.

TowneBank hopes to benefit by adding talent in specialties such as information technology, risk management and compliance – jobs most likely to be cut in a merger, Aston says.

BB&T and SunTrust will try to retain some people in leadership and production roles, including branch employees and loan officers, he says. But the merger will create a talent pool in Virginia.

“Mergers typically present opportunities for banks of our size to pick up talented people in roles that are hard to come by in today’s world,” Aston says.

As of mid-July, Atlantic Union had already picked up around 20 BB&T and SunTrust employees, ranging from branch workers to commercial banking and credit officers. Most of the new hires were looking to get ahead of potential post-merger personnel shakeups.

“The coming disruption has been a catalyst [for job-seekers],” Asbury says. For workers who were already inclined to make a change, the merger “probably accelerated their decision-making.”

BB&T and SunTrust are well respected in banking circles, and BB&T, in particular, is accomplished in acquisitions.

“Any time there is a merger, especially one of this size, there will be a certain number of folks who won’t be happy,” Aston says. “From a bigger perspective, no bank in the country over the last 30 years has done an acquisition better than BB&T.”

Asbury holds both institutions in high regard, saying, “They will do as good a job as they can with executing one of the largest bank mergers in recent history.”

Globally, “the merger is an all-clear sign that the financial system has repaired itself from the Great Recession,” Engelke says. “The economy has entered into a new era where monies will gravitate back to Main Street from Wall Street.

“The regulatory entities must approve this merger and, in my opinion, the merger is an indication that not only are both banks run efficiently, but also the odds that any issue can create a systemic problem are low,” Engelke continues. “The ‘too big to fail’ mantra does not apply in this situation.”