Home News The art of growth

The art of growth

A few years ago, Ed Beardsley was looking out the window of his downtown Suffolk restaurant, wondering whether a new business would move into the empty storefront across the street.

Once Suffolk’s main commercial corridor, downtown was facing a downward spiral about five years ago. Despite restaurants like Beardsley’s The Plaid Turnip, a new courthouse being built and other businesses setting up shop, downtown paled in comparison with other areas of the city, especially the bustling Harbour View development in North Suffolk.

“Downtown has always struck me as having a great feel to it, but a lot of people looked at downtown as being neglected,” Beardsley recalls. “They were waiting for [Suffolk] City Council to fix the problems. Then I thought, ‘Why don’t I do something about it?’ It was put up or shut up.”

Beardsley’s resolve led him to create SPARC — Suffolk’s Prime Arts Retail Cultural initiative, which uses art to engage and enhance the community and its economy. Since its founding in 2017, SPARC (not to be confused with the Richmond nonprofit performing arts school with the same acronym) has grown to include about 70 artists who either display their work downtown or have converted vacant properties into studios. Many of them sell their work in the SPARC Shoppe, which Beardsley hopes to combine with One Past 7, an artists’ studio space he opened on the first floor and mezzanine of the former Suffolk Professional Building.

He sees the downtown arts scene as a new start for the venerable city. “A common element of underperforming areas of cities or downtowns that have deteriorated and been revived is public art that revitalizes and helps develop community pride. It all builds in a positive way.”

City leaders are supporting Beardsley’s endeavor. The Suffolk Economic Development Authority awarded the SPARC Shoppe a $15,000 grant to enlarge its space. And in October,  City Council is expected to adopt new guidelines for public art displays, which Beardsley says will open the door for the formation of a downtown arts and cultural district. “It’s a huge marketing tool to attract new businesses.”

He believes art, such as painting family-friendly murals on the sides of downtown buildings, will be key to attracting more people downtown. Property owners have offered to host murals, and painting is expected to begin next spring. “This is a huge, inclusive, strong, community-building project,” Beardsley adds. “It definitely will be a conversation starter. It’s very exciting. I think of it as a new start.”

Growing but still small town
To spur economic development and community pride, the Virginia Department of Housing and Community Development designated Suffolk a Virginia Main Street community more than 30 years ago. That led to the rehabilitation of older downtown structures along with new investments, including the transformation of the former Suffolk High School into the Suffolk Cultural Arts Center and the construction of the Hilton Garden Inn and Conference Center.

This time, development is focused on a new, $21.1 million, 45,305-square-foot downtown library to replace the Morgan Memorial Library. It’s expected to open in 2021. 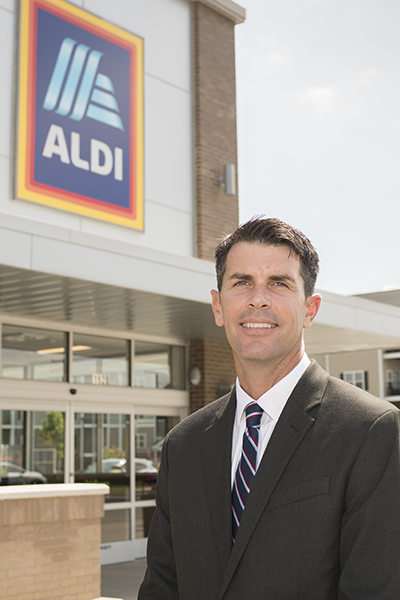 “We welcome the next wave of downtown redevelopment,” says Kevin Hughes, Suffolk’s economic development director. “It’s time to put on a fresh pair of glasses and take a new look at downtown. We have to see how we can best plug in people and attract them and keep them interested in the area.”

Although it wants to attract new residents and businesses, the 430-square-mile city also is determined to maintain its small-town, community atmosphere, even as its populace mushrooms. Suffolk is one of Virginia’s fastest growing municipalities, and its population has steadily increased each year since 2012.

With more than 92,500 residents, the city is the only Hampton Roads locality projected to grow by at least 10% each decade between now and 2040. City leaders attribute Suffolk’s growth to its accommodating business environment, high standard of living, many amenities and central Hampton Roads location.

“Suffolk is very diverse,” Hughes says. “We’re very rural to the south and west. We’re able to preserve that because we have so many pockets of opportunity for development within the core city.” 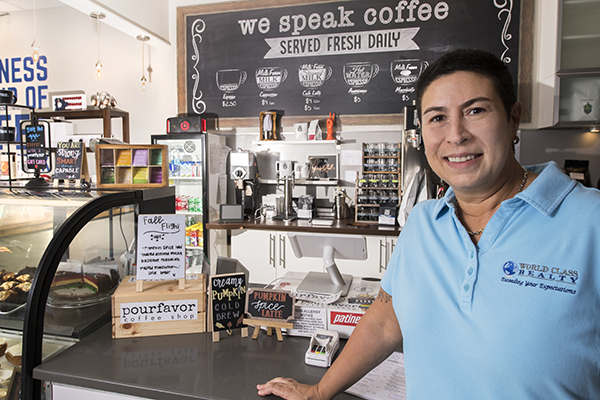 Last year, when Marie DePrado decided to open additional locations of her Virginia Beach businesses, World Class Realty and Pourfavor Coffee, she considered Norfolk and Portsmouth before checking out downtown Suffolk. “I fell in love with the place,” she says. “There’s something special about Suffolk.

It’s so traditional, so humble. The people are so nice, and the culture is amazing.”

Since opening her new locations in the 19th-century Luke House last fall, DePrado has become convinced Suffolk’s downtown is on an upswing. “More people are coming to downtown events,” she says. “They’re hungry for more businesses, economic development and community events. The money is staying here.”

Mixed-use mecca
Downtown is one of four significant mixed-use development projects underway in Suffolk. A few miles away, the former Louise Obici Memorial Hospital site sat vacant for more than a decade after the hospital moved to a new facility in 2002. But the construction of Meridian Obici apartments there in 2016 spurred commercial development, culminating with Cinema Café’s plans to build a seven- to eight-screen, 35,000-square-foot movie theater, restaurant and bar at Obici Place. The mixed-use community includes the apartments and an Aldi grocery store. The theater is expected to open in 2022.

Several mixed-use projects also are in the works in the burgeoning North Suffolk area. The Point at Harbour View includes 55 acres of the former Tidewater Community College site, which will be developed into apartments, town homes, condominiums, shops, office space and hotels. TCC sold the property to the Suffolk Economic Development Authority about 15 years ago. The college’s real estate foundation owns the remaining acreage, which it plans to market for development this fall.

Hughes is excited about the site’s prospects. “This one is definitely unique and one we’ve been thinking and dreaming about for a very long time,” the economic development director says. He adds that the location, off Interstate 664, is ideal, with about 80,000 cars driving by it daily. “Development is heading that way.”

Also off I-664, Chesapeake development firm BECO is spearheading Bridgeport as a community-centric development for North Suffolk and the Bridge Road corridor, one of the city’s most heavily traveled highways. Old Dominion University’s E.V. Williams Center for Real Estate named Bridgeport as one of the region’s top five 2019 retail developments.

BECO founders Burt Cutright and Eric Olson envision Bridgeport as a walkable community that will feature more than 700 luxury apartments, boutique shops, offices, an outdoor entertainment venue and a social club. It is slated to be completed within four years.

“The Bridgeport project really aligns with the comprehensive plan we have,” Hughes says. “Folks are interested in walkability and more amenities surrounding where they live.” 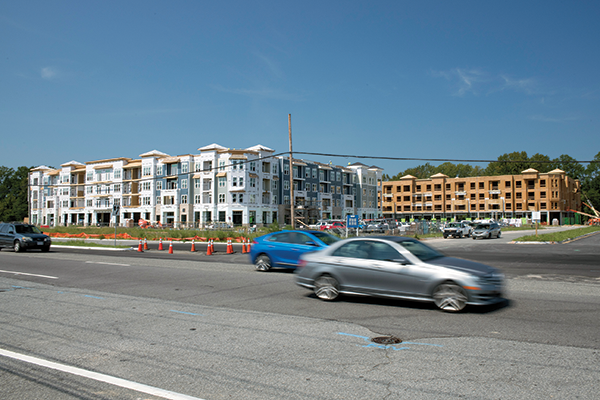 Bridgeport’s first phase will feature 288 one- and two-bedroom apartments in five buildings, with the bottom levels of four of the buildings containing shops, a boutique fitness club, restaurants, a financial firm and an upscale salon. Called 3800 Acqua, the apartments are expected to open this fall.

The second phase will include the 159-unit apartment complex, Royal Sail at Bridgeport, one of the nation’s first 55-and-older communities in a mixed-use development. “Senior communities are not really common in mixed-use communities,” says Julie Gifford, BECO’s public relations director. The final phase will include building more than 280 apartments in a yet-to-be named complex. BECO has not announced when construction will begin on Royal Sail at Bridgeport, but the project is slated to be completed in four years.

“We’re getting lots of interest,” Gifford adds. “This area is not only the fastest-growing area in Hampton Roads, it’s one of the fastest-growing in Virginia.”
Across Bridge Road from Bridgeport, BECO is constructing the Harbour Breeze Medical Center, which it expects to be completely occupied by the end of the year.

Health care is a growing industry in North Suffolk, with two of the region’s major providers in fierce competition. The Virginia Department of Health approved Bon Secours’ request to build a $77 million, 75,000-square-foot hospital on its Harbour View campus, tentatively scheduled to open in 2021. However, the department denied Sentara’s bid for a 24-bed hospital at its Sentara BelleHarbour facility in North Suffolk, which this year opened a second medical building with an ambulatory surgery center.

Hughes welcomes the new medical offerings to the city’s growing northern corridor. “The winners at the end of the day are our citizens because they will have more specialty care than they’ve ever had before.”

Art projects
And, if Beardsley and SPARC are successful, the city’s arts community will also win, as they envision a Suffolk with more art on display than ever before, with the downtown initiative expanding citywide.

“Downtown is the nexus of the whole thing,” Beardsley says, “but I really believe we can have an arts presence in each borough. I see it stitching together all of Suffolk and becoming a great identifier that shows the power of art and creativity.”

Art also will be a prominent part of Bridgeport, Gifford says, noting that BECO hopes to replicate SPARC’s efforts in downtown Suffolk. “We want to have artwork throughout the property and are in early conversations with SPARC about bringing the arts district out there.”

In addition, Bridgeport will host Suffolk’s first “LOVE” sign. The Virginia Department of Tourism has been celebrating the 50th anniversary of its “Virginia is for Lovers” theme by placing more than 150 of its large LOVEworks signs around the state, with the life-size letters serving as photo backdrops. “People will be able to stand on [it] and get their pictures made,” Gifford says.

There also will be photo opportunities at the three silos BECO plans to refurbish into an artistic, unique bar or restaurant on the former farmland. “Those are going to attract attention from all over,” she says.

Artistic endeavors like these also will  help promote community pride, Beardsley adds. “Suffolk should be proud of and celebrate local art and artists. We’re very much promoting the idea that art and artists are celebrating the community and vice versa.”