Home News The art of giving back

The art of giving back

By traditional measures, Patricia Buckley Moss should never have succeeded. While growing up in New York City in the 1930s and 1940s, she struggled with dyslexia, a language processing disorder that hinders a person’s ability to read, write and spell. She still recalls an especially painful childhood when “I pretty much failed my way through school, and people were always calling me stupid and dumb.”

Fortunately, a teacher saw beyond the bad grades to recognize the young girl’s budding artistic potential. Moss’ mother also encouraged her, making sacrifices to send her to a special high school in Manhattan that allowed her to take four art classes a day. Upon graduation, Moss’ talent had blossomed to the point that she received a full scholarship to the prestigious Cooper Union for the Advancement of Science and Art.

In time, P. Buckley Moss would become one of the most prolific, beloved and commercially successful artists of the modern era, known worldwide for her depictions of rural and religious life in the Shenandoah Valley.

Along the way, Moss never forgot her early adversity. In fact, she has leveraged her personal story and success to create a philanthropic model designed to bring attention to arts education, encourage children dealing with learning difficulties and help funnel donations to local communities.

“I’ve always believed that when you are given to, you must then give in return — and you mustn’t think about it,” says Moss, who has always had a deep Catholic faith. “I learned that from my mother. If you want to give, you give and you give from your heart, and you give where it’s going to make a difference in people’s lives.” 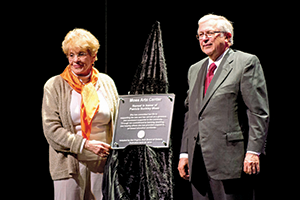 Engaging art
That viewpoint culminated re­­cently with Moss’ gift of $10 million to Virginia Tech’s capital campaign for a new community arts facility. It is one of the largest donations the school has received.

The Moss Arts Center, named in her honor, opened last fall and was dedicated in April. The 147,000-square-foot facility houses the Institute for Creativity, Arts and Technology, a 1,260-seat performance hall, several art galleries, studio space for educational and research activities, and an experimental venue known as the “Cube.”

Moss already had endowed a series of project development grants for students studying to be teachers at Virginia Tech’s School of Education, but she didn’t hesitate when she was approached about helping out with a new arts facility.

“I like Virginia Tech’s philosophy. I like the people who work there,” she says. “And when you think about how often elementary and middle schools are cutting art and music out of education, it’s nice to see that this school, even if it is at the higher-education level, is putting money and resources into the arts. It’s wonderful.”

The arts center doesn’t showcase Moss’ work, but it does capture her belief that art is most valuable when it provides opportunities for self-expression, interaction and connection, says Ruth Waalkes, Virginia Tech’s associate provost for the arts and executive director of the Moss Center.

“Our mission is really to transform lives through exploration of the arts and the creative process, and one of the ways we do that is by providing opportunities not just for performances and art exhibitions, but we also have deeper engagement through workshops and master classes and talks and really trying to build around the arts a lot of different entry points for people of all ages, including K-12 students.”

Works of faith
Moss moved to Virginia and the Shenandoah Valley in the 1960s, by then married and a mother to six children. Her artistic talent soon came to prominence when one of her Impressionistic paintings, “Boats,” won first prize at the Waynesboro Art Show. Until then, no woman had ever won top honor, so Moss, taking no chances, opted to use the abbreviated, gender-unspecific moniker P. Buckley Moss, instead of her first name, Patricia.

The name — and her paintings — soon gained widespread acclaim, especially after she came into contact with some Amish and Mennonite families living in the area. She began portraying scenes of their simple, faith-filled lifestyle, along with the natural beauty of the region.

“The fact is, I think I have always been a religious painter,” explains Moss, whose earliest work reflected her Catholic beliefs. “And religion so easily expresses itself in nature, which is so prevalent in the Valley, and the Amish and Mennonites essentially live out their religion for all to see, so all of those subjects are symbols and icons in many of my paintings.”

Her simple but complex, often whimsical style garnered a huge following — she was once dubbed the “People’s Artist” by CBS correspondent Charles Kuralt — but it was her embrace of the latest breakthroughs in print technology in the early 1980s that transformed her artwork into a commercial windfall. Moss Galleries Ltd., her retail business, turned to offset lithography to deliver high-quality, limited print reproductions of her art, setting up sales channels through authorized art galleries as a way to meet what had become an almost overwhelming demand for her work.

Now 81, Moss continues to create and sell her work. The News Leader in Staunton reported on May 28 that Moss’ museum in Waynesboro, which has operated since 1989, will close after July 13, but two Moss galleries will continue to display her work. One gallery is in Blacksburg and the second is planned in Waynesboro.

Moss enjoys her success, but she remains as down-to-earth and accessible as ever, according to her daughter Rebecca Ghezzi, an art professor at the University of Georgia. An etcher, Ghezzi also is heavily involved in her mother’s business and charity work. “Mom is so open and honest that, once she starts talking, everybody feels at ease, no matter if they’re someone who collects her work or one of the upper academics at Virginia Tech.”

Moss views her success and wealth as a gift and a means to an end. “If you’ve made money in this world, it’s ‘Oh, thank you, Jesus,’ because now you can do something with it,” she says.

In fact, her artistic endeavors are fully integrated with her charitable activities. For example, she creates four limited-edition paintings each year that can be purchased only by subscribing members of the nonprofit P. Buckley Moss Foundation or at foundation fund­raising events. Proceeds from the art sales are used to provide scholarships and grants to teachers; to finance art education at summer camps and underfunded schools; and to host children’s art shows.

“Everything we do through the foundation is designed to try and help children,” says another daughter, Patty Moss, past foundation president and now chief operating officer for Moss Galleries. “Mom really feels like every child has value and something of worth to contribute and that they deserve the same type of opportunities that she had to help discover that for themselves.”

Moss also donates her prints and makes special appearances to help the P. Buckley Moss Society, which started out as a club for fans of her artwork but soon evolved into a charitable endeavor. The society has 26 chapters in eight states that raise money for their local communities or the foundation.

The chapters typically take one of Moss’ donated prints or a quilt (which features a Moss original design painted on cloth) and then hold an auction or sell raffle tickets. “Wherever there’s a need, all they have to do is ask, and we’ll work with them to help out,” Moss explains.

To date, Moss Society chapters have raised about $2.5 million for a number of causes, ranging from teachers’ scholarships to the payment of medical expenses for local cancer patients.

Moss’ generosity doesn’t end there. For more than 25 years, for example, she has created an exclusive print edition annually for the benefit of WVPT, a Shenandoah Valley public television station, and she has long supported poverty relief efforts of the Central Committee for the Mennonite Church.

Wherever she is, she always finds ways to work with children, especially those with learning challenges, frequently visiting middle and high schools and or spending time with students participating in foundation-sponsored art shows.
“I always tell children to just get out there and try, to do what is honest to you and not to let other people turn you against what you’re doing,” she explains. “The great thing about the arts is that there’s really no right or wrong, no better or worse. It’s a way to learn who you are and express that.”