Douglas was recognized for best sale transaction/retail for the $130 million West Broad Marketplace assemblage and also with Austin Newman for the 168,500-square-foot, 10-year lease of Deep Run 3 to McKesson Medical-Surgical.

Robison received honors for best sale transaction/office for his work on the $40.6 million sale of the Highwoods suburban office portfolio and with Evan Magrill on the $31.2 million sale of a 502,395-square-foot industrial portfolio, known as the Enterchange in Hanover County and Colonial Heights.

So, how do they get big deals done?

Douglas, a senior vice president with Thalhimer, is a self-described “people” person. At the mall, he “loves watching people,” a trait that serves him well.  “This business is very much a people business,” he says.

While focusing mainly on office brokerage, he often works with retail and land sales, too. He’s the first to admit that his work can be extremely challenging. Not only is commercial real estate ever changing but “you don’t make every deal,” he says.

Douglas’ biggest transaction last year — with a $34 million lease value — was the long-term office lease to McKesson Medical-Surgical. The company plans to relocate and expand its headquarters to the building, located off Mayland Drive in Henrico County. The move is expected to create 225 jobs.

Deep Run 3 was part of the former headquarters complex for the now defunct Circuit City Stores.

Asked about his most challenging deal, Douglas points to the complex assemblage of West Broad Marketplace. The 61-acre property now under construction on West Broad Street in the Short Pump corridor of Henrico had seven parcels and multiple owners within those parcels. That meant Douglas had to shuffle different landowners with different personalities. “You become a chameleon … and think on your feet,” he says.

No one was more impressed with Douglas’ work than West Broad Marketplace developer Jack Waghorn, president of NV Retail in Vienna. “Mark knows the Richmond market inside and out. He is one of the most professional brokers I have ever had the pleasure to work with,” he says. “His true strength is that he is a consummate communicator. He addresses issues and problems before they occur.”

One of the most unique aspects of the deal involved a parcel owned by a partnership. One of the three owners lived in a remote area of Costa Rica. “We were able to email her documents because it was more than a three-hour drive for her to get to the post office,” Douglas says.

The woman didn’t have a printer at home. “We had her take pictures of the signature pages of the contracts and amendments,” says Douglas, and then the woman posted her signature on Facebook on a secure page that wasn’t available to the public.

Altogether, he spent 22 months putting the transaction together. “One person not participating in that assemblage could have blown up the whole thing, but everybody was fantastic.”

Douglas says retail development is “on fire” now, especially heading out to Short Pump and Route 288. “We are going to run out of tenants,” he says, with development outpacing the number of retailers who want space.

Despite the complications, Douglas, 53, enjoys real estate. “It’s the thrill of victory, of making the deal,” he says. “And I have to put my four daughters through college.” 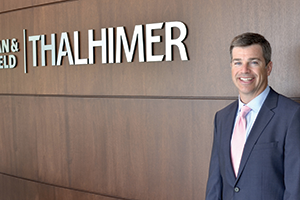 Growing up, Robison, 40, always participated in sports, playing soccer and basketball in high school. He relished the excitement and competitive nature of the game. He finds the same qualities in commercial real estate. “I wasn’t going to make it as a professional athlete, and this is the closest thing to sports that I have found. We do this as a team, and that appeals to me.”

As senior vice president of Capital Markets Group, Robison focuses on selling investment properties. He likens his work to a roller coaster. “You never want to get too high or too low. You have the opportunity to win some really big, exciting deals and sometimes you lose them,” he says. “You have to stay somewhat even keeled to be successful.”

Michael Pruitt of Pruitt Associates in Henrico says Robison is client-focused. “I think Eric is hands down one of the best brokers in the business,” he says. “He’s a man of great character, and he is very hard working. He understands and has thorough knowledge of the market he works in.”

Robison’s largest deal in 2014 was the disposition of 11 suburban office buildings in the Highwoods Property Trust in and around the Innsbrook Corporate Center in Henrico.  “Highwoods was a great property to sell and a great client. We got a lot of interest,” he says.

Yet a deal for the sale of the 12-story Mutual Building, a historic property in downtown Richmond, turned out to be the most challenging. When he began working on the sale, the building had a tenant, the Christian Barton law firm, that occupied the top four floors. The buyer wanted to develop the property into apartments, but the tenant did not want to leave.

“The buyer couldn’t pass up owning the building because of the potential it had,” Robison says. “He was willing to take on the risk of taking the tenant through the lease term (Christian Barton is still there) and then develop the apartments or find an alternative after the lease was up.”

He believes that business investment sales will continue to be strong even if there are minor increases in interest rates. “Even though our market size is a little smaller and not as deep as Washington, D.C., Charlotte or Raleigh, more investors are looking at our market,” says Robison.

He enjoys bringing in new investors from other parts of the country that might not have Richmond on their radar. “It’s great to have them invest for the first time and see them be successful afterward.”