Look to the skies.

Birds, fireflies, mosquitoes and other winged creatures from the natural world increasingly will be joined by swarms of drones as companies race to develop an autonomous drone delivery industry.

Ground zero — or maybe now it’s sky zero — for Google will be the New River Valley area in Virginia.

Virginia Tech has been working with Alphabet, Google’s parent company, on Project Wing, the nation’s first FAA-approved commercial delivery service using long-distance aerial drones out of sight of operators. (The drones have a delivery range up to six miles.) The service is expected to begin operation there this year.

Virginia Tech is one of several major state research universities that have been exploring the use of drones – for everything from delivering groceries to carrying, and administering, an injection to reverse an opioid overdose, to bringing critical parts to Navy ships at sea, even in hostile territory.

As one example of how drones can be employed, Project Wing delivered hundreds of lunches to Virginia Tech students in September 2016. The event marked the first large-scale drone delivery to members of the general public.

The Federal Aviation Administration (FAA) has estimated that as many as 1.6 million commercial drones will be in use by 2021.

Virginia Tech’s delivery-drone partnership with Alphabet “will be the first time for the general public to begin what I think will be a totally new revolution in how they engage with aviation,” says Mark Blanks, director of the university’s Mid-Atlantic Aviation Partnership (MAAP) test site. “It will be the first time ever the average Joe Public will be able to receive goods in a whole new manner.”

As currently envisioned, delivery drones would hover about 20 feet off the ground and lower packages on tethers to customers.

A large part of the effort has been led by MAAP, which operates an FAA-designated test site for unmanned aircraft systems.

Started in 2013, MAAP serves as a bridge between federal regulators and industry partners to develop safety procedures and protocols laying the groundwork for expanded unmanned aircraft operations.

“Then we became self-sustaining because the value proposition was significant for industry,” he adds, noting that its funding primarily comes from industry and government grants.

Virginia Tech has a history of developing FAA-accepted safety guidelines to ensure that drone flights can safely operate beyond the visual line of sight of the drone operator and flying over  people — two critical elements necessary for the delivery-drone industry to operate successfully.

Virginia Tech research also includes a project to incorporate autonomous algorithms and machine learning in using drones for search and rescue missions, funded by a $1.5 million grant from the National Science Foundation.

Drones can be used to fly over dangerous terrain or explore large areas to help first responders on the ground narrow the parameters of their search, says Ryan Williams, an assistant professor in Virginia Tech’s Department of Electrical and Computer Engineering.

In another drone-related research project at Virginia Tech, Blanks and MAAP worked with insurance giant State Farm to gain an FAA waiver to allow aerial drones to survey property damage caused by hurricanes Florence and Michael.

To the rescue
At Virginia Commonwealth University in Richmond a group of seniors in the College of Engineering have developed a preliminary model for an “ambulance” drone designed to deliver and administer a lifesaving injection of the opioid-overdose reversal drug Naloxone. A remote drone operator guides the injections with the aid of a camera mounted on the front of the drone. 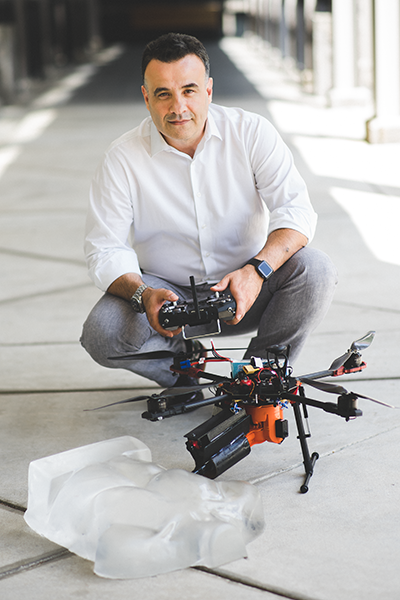 “There needs to be more testing; [the ambulance drone] needs to be commercialized,” says Erdem Topsakal, chairman of the department of electrical and computer engineering, who appealed for business investment to fund the project beyond its preliminary stages.

The U.S. Army Night Vision and Electronic Sensors Directorate has sponsored the project.

“It opens up other smart health care at the edge,” says Nibir K. Dhar, the directorate’s chief scientist.

Topsakal and Dhar say that the ambulance drone has obvious implications for civilian health care — especially in congested cities or rural areas where emergency personnel may be unable to respond in a timely manner. The drone also can be used in military situations. “If you’re in the middle of a battlefield and a soldier is losing blood, something can be injected to stop the bleeding,” says Topsakal.

Delivery on high seas
At Old Dominion University in Norfolk, researchers and students worked with the Navy seeking a way for an aerial drone to carry small ship parts or packages weighing as much as 30 pounds to vessels on the high seas. 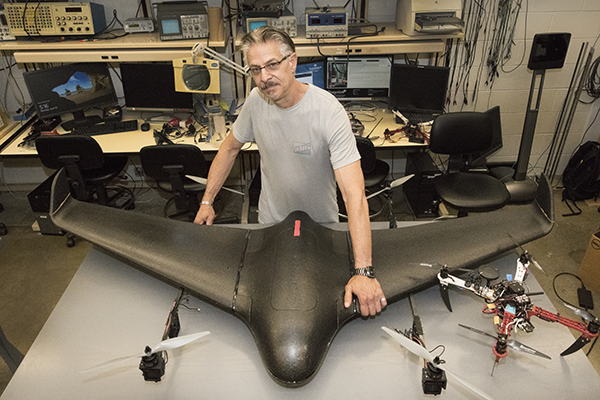 But there’s a caveat: “What they want is to be able to locate a ship in an environment when they don’t necessarily have radio communication with a drone” and they don’t have a GPS signal, says Thomas Alberts, professor of mechanical and aerospace engineering at ODU’s Batten College of Engineering & Technology.

Drones typically utilize GPS technology for navigation, Alberts says, but a GPS can be susceptible to cyberattacks or outside interference, “so they want to avoid that scenario.”

Using drones instead of manned crafts to deliver parts and components to a ship could also save lives, especially in hostile areas.

For a prototype to navigate without the aid of GPS, a group of ODU students employed a larger and more expensive inertial measurement unit (IMU) than is typically used on drones. The drone’s path is calculated using data from the IMU, measuring distance traveled by the drone and its directional changes. Once the drone is within camera view of a target vessel for delivery, an image-recognition process identifies the ship as well as a symbol marking the drone’s shipboard landing spot.

The ODU project wrapped up in late June. It was funded for a year through a $60,000 grant from the Office of Naval Research.

Insect-size vehicles
Research scientists at the University of Virginia’s School of Engineering & Applied Science have been studying butterflies and other flying insects as they examine the possibilities of developing small robotic air vehicles.

These micro air vehicles (MAVs) would be so minuscule that they could fly through cracks in rubble to search for earthquake victims. They could also be employed to explore radioactive environments.

Other U.Va. research involves autonomous underwater vehicles that could be deployed for long periods of time to collect data for scientists or as a surveillance tool for the military.

The underwater vehicle research has been led by Hilary Bart-Smith, a professor of mechanical and aerospace engineering, with $14 million in funding from the Office of Naval Research.

Early protypes for two micro air vehicles — one the size of a dragonfly — as well as an autonomous underwater vehicle created to look and swim like a manta ray  — have already been advanced.

But far more work lies ahead.

“The fundamental science takes years to discover the secrets of flying and swimming,” says Haibo Dong, a U.Va. aerospace engineer and associate professor who has been working on both the MAVs and the autonomous underwater vehicles.

Blanks of Virginia Tech says drones are on the minds of many these days — industries, independent scientists, universities and the general public.

“I think it’s primarily because of the great potential they offer to many different aspects of life in general: the ability to revolutionize the way many types of businesses function, the ability to possibly save lives, to save money.