Smarting from disappointing returns last year and facing steady annual increases in costs for students (including tuition), many of Virginia’s largest college and university endowments are re-evaluating how and where they’ll invest their money this year and next.

Some prefer the stocks, bonds and notes issued by U.S. companies — both publicly traded and privately held — while others believe safer and higher returns can still be found in real estate, different energy industries and overseas in the once high-flying markets of Mexico, Japan, China, India, Russia and Brazil.

And a few report they’re content to sit tight and make few changes, despite recent declines in the market value of their holdings.

A report from the National Association of College and University Business Officers (NACUBO) released in late January showed the average increase in the market value of endowments at more than 800 of the colleges and universities it surveys annually fell to 2.5 percent last year, down from a 15.5 percent increase in fiscal year 2014.

In a statement the organization said the dramatic drop in annual growth had lowered the long-term, 10-year median growth rate to 6.3 percent, well below the 7.5 percent annual growth rate   “that most endowments report they need to earn in order to maintain their purchasing power after spending, inflation and investment management costs.”

While not a college endowment, the 529 program has similar goals: to help students complete their education as affordably as possible.

According to Morris and Ometer, Virginia 529’s obligation to pay off the prepaid tuition contracts of families in roughly 20 years means the organization has a more conservative investment philosophy than most college and university endowment funds, which have investment horizons that extend several decades into the future.

As a result, about a third of the Virginia 529 prepaid tuition portfolio is invested in global stocks, both public and private. Fixed-income investments of various types account for more than half, and the remainder are holdings of so-called “alternative” instruments, including hedge funds, private real estate and private equity.

For the time being, says Morris, this asset allocation mix remains the best bet for the families that she and her team of money managers work for, even with many global financial markets in turmoil.

“Often you are better off not losing a lot of money than making a whole lot,” she says.

Seeking opportunities
In fiscal year 2015, the University of Richmond managed almost the same amount as Virginia 529’s prepaid fund. UR reported its endowments had a market value of almost $2.37 billion, up about 2 percent from $2.31 billion a year earlier. The school’s endowments grew 15.5 percent in 2014 and 8.5 percent in 2013.

Rob Blandford, president and chief investment officer of the school’s investment arm, Spider Management LLC, says in a statement that he and his investment team are less focused on the Federal Reserve’s decision late last year to raise benchmark U.S. rates and more on energy properties, agricultural products, precious metals and investments in developing nations around the world.

He says he and his team “are looking at opportunities driven by the dislocation in commodity markets and certain emerging economies.”

The NACUBO analysis revealed that, according to its research, U.S. stocks held by college and university endowments returned 6 percent in 2015, down from almost 23 percent in 2014, and so-called “alternative strategies” yielded just 1 percent last fiscal year compared with 12.7 percent a year earlier.

Among the wide array of alternative investments, venture capital provided the highest return, 15 percent, down from 23 percent in 2014.

4 percent increase at U.Va.
Last year, the University of Virginia retained its first-place ranking in terms of market value among all institutions of higher learning in the state, according to the NACUBO survey. The $6.18 billion U.Va.’s various foundations managed as of June 30 represented an almost 4 percent increase from the $5.94 billion reported in 2014, according to the survey. 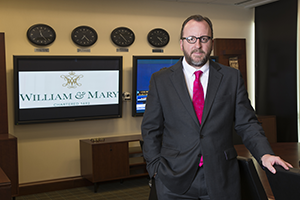 Brian Hiestand, the longtime chief investment officer at W&M, sees new investment opportunities amid the turbulent world economy and plans to take advantage of it.
Hiestand says the foundation held roughly two-thirds of its financial assets in publicly traded and private equities around the world. Traditional fixed-income products — like low-yielding government bonds and highly rated corporate debt — accounted for about 5 percent of total assets, down from about 15 percent of the portfolio in 2006.

Riskier, yet higher-yielding, credit instruments now account for about a quarter of the foundation’s investments, up from about 2 percent in 2005 and 15 percent in 2009. Real assets, like energy properties and real estate, now account for approximately 6 percent of the total. Hiestand says this category of investments has become one of his “most important income-producing segments of the portfolio” and could rise “to between 10 and 12 percent of the foundation’s total investments in the next five years.”

But looking ahead both to the rest of this year and next, Hiestand believes the foundation can benefit from a changing U.S. economy.

“We think credit markets will be a very interesting place by the end of this year, maybe in the next two years,” he said. “Bankruptcies are starting to pick up, especially in the energy sector. Retail and media are also becoming interesting opportunities … We’ll be looking at risk-returns throughout the portfolio, and the area most likely we’ll cut back is equities.”

Hiestand compares his long-term investment horizon and risk-return philosophy to those that guide his counterparts at pension funds and even insurance companies.
“When we look to invest we have certain objectives,” he says. “You don’t want a lot of volatility. You want to limit the risk in the portfolio to assure that steady stream of income back to the university. We want to make sure there is always an inflation-adjusted basis of everything we buy to maintain the purchasing power to every dollar invested in the fund.”

Shifting role for endowments
While conceding higher education endowment funds like his foundation are “afforded the opportunity to take different kinds of risks than other investors,” Hiestand says his primary responsibility is to give W&M students who are enrolled “10, 20, 30 years down the line” the same educational resources as those studying now.

In recent years, the General Assembly slashed spending to Virginia’s public colleges and universities during recessions and budget shortfalls. As a result, in-state tuition for full-time students attending Virginia’s four-year universities and two-year community colleges has more than doubled since 1990, according to the State Council of Higher Education for Virginia.

School officials report their endowments now play a much more central role in supporting the schools’ educational mission and paying a larger share of the bills on campuses throughout the commonwealth.

For example, in the early 1980s, the state provided more than 40 percent of W&M’s annual operating budget, says school spokesman Brian Whitson. “Today, it is less than 12 percent.”
“Obviously, the larger the endowment, the larger amount of funds we can use to support the budget,” says Whitson.

In Fredericksburg, state aid to the University of Mary Washington (measured in 2015 constant dollars) is down by “nearly 20 percent since 2007,” says Rick Pearce, the school’s vice president for finance and administration.

As a result, the University of Mary Washington Foundation is playing an increasingly critical role for students, especially those in need of financial assistance, says Jeff Rountree, the foundation’s chief executive officer.

“Disbursements from endowments are absolutely critical to attract and retain the best students,” says Rountree.

To maintain that annual stream of revenue and financial assistance to needy UMW students, Peter Rup, the UMW Foundation’s chief investment officer, says he thinks cuts in long-term debt holdings and increased investments in U.S. equities, both public and private, may be the answer.

“Global economies are saddled with unprecedented levels of debt, which has cast a deflationary pall over the world,” Rup says. “As a result, global interest rates are likely to remain low for an extended period of time. As such, higher allocations to equity-based investments will be required in order for such institutions to maintain their spending policies at current levels.”