Bank acquisitions and mergers, particularly among Virginia’s community banks, continued apace in 2021. Banks sought scale for efficiency and flexibility, as well as to acquire resources in anticipation of potential new government regulation.

“The recurring theme in bank mergers is scale,” Bruce Whitehurst, president and CEO of the Virginia Bankers Association, told Virginia Business in summer 2021. “Economies of scale lead to more efficient organizations, which should be more profitable and provide more growth opportunities.”

One of the largest banking M&A deals in Virginia last year was that of the parent companies of Essex Bank and United Bank. Charleston, West Virginia-based United Bankshares Inc. acquired Henrico County-based Community Bankers Trust Corp. for $303.3 million in a deal first announced in June 2021 and that closed in December 2021. The acquisition created a bank with about $29 billion in assets and nearly 250 offices across eight states and Washington, D.C. In December 2021, it was the 41st largest banking company in the U.S. based on market capitalization. As a result of the merger, Community Bankers Trust Corp. expected to lay off 51 employees at offices in Henrico County by the end of January.

The parent companies of Blue Ridge Bank and Virginia Commonwealth Bank completed their merger on Feb. 1, 2021. Charlottesville-based Blue Ridge Bankshares Inc. and Richmond-based Bay Banks of Virginia Inc. formed a bank with about
$2.8 billion in assets and $1.9 billion in deposits based on Sept. 30, 2020, data.

Additionally, the parent companies of Virginia National Bank in Charlottesville and The Fauquier Bank in Warrenton announced the completion of their merger on April 1, 2021. The combined bank had about $1.9 billion in assets on Sept. 30, 2021, and $1.7 billion in 2020 deposits.

On July 1, 2021, Strasburg-based First National Corp., parent company of First Bank, completed its acquisition of The Bank of Fincastle, creating a company with about $1.2 billion in assets and $1.1 billion in deposits, based on December 2020 data.

Just ahead of 2021, Altavista-based Pinnacle Bankshares Corp., parent of First National Bank, and Danville-based Virginia Bank Bankshares, parent of Virginia Bank and Trust, completed their merger in November 2020. Based on June 30, 2020, information, the combined bank had total assets of about $796 million and deposits of about $719 million.

One announced merger last year didn’t pan out, however. In January, the parent companies of Blue Ridge Bank and Fairfax-based FVCbank called off their merger. The Blue Ridge Bankshares and FVC Bankcorp Inc. deal was first announced in July 2021, then delayed four months later. The companies said in January they had mutually agreed to terminate the agreement, which would have formed a bank worth $5 billion. 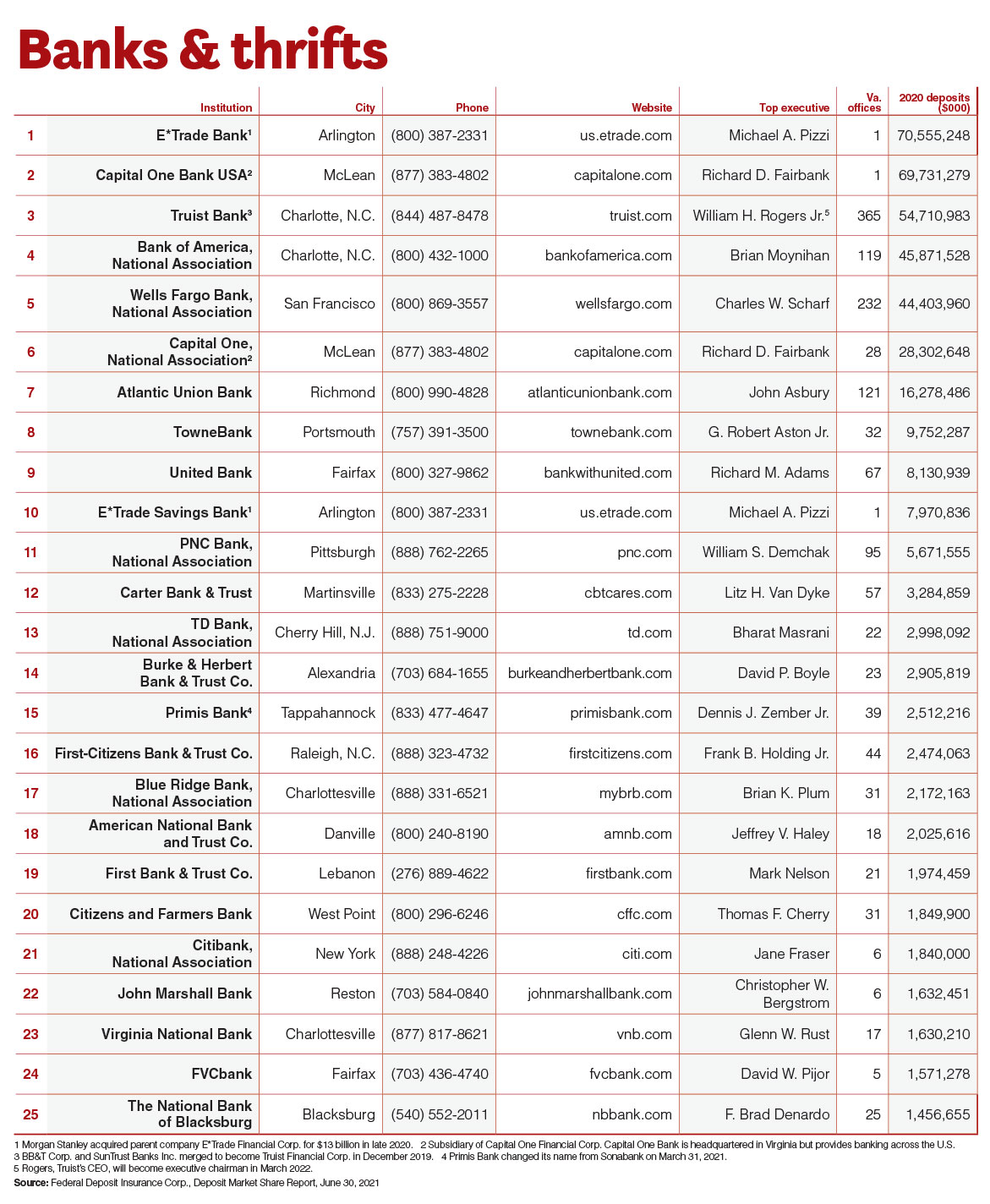 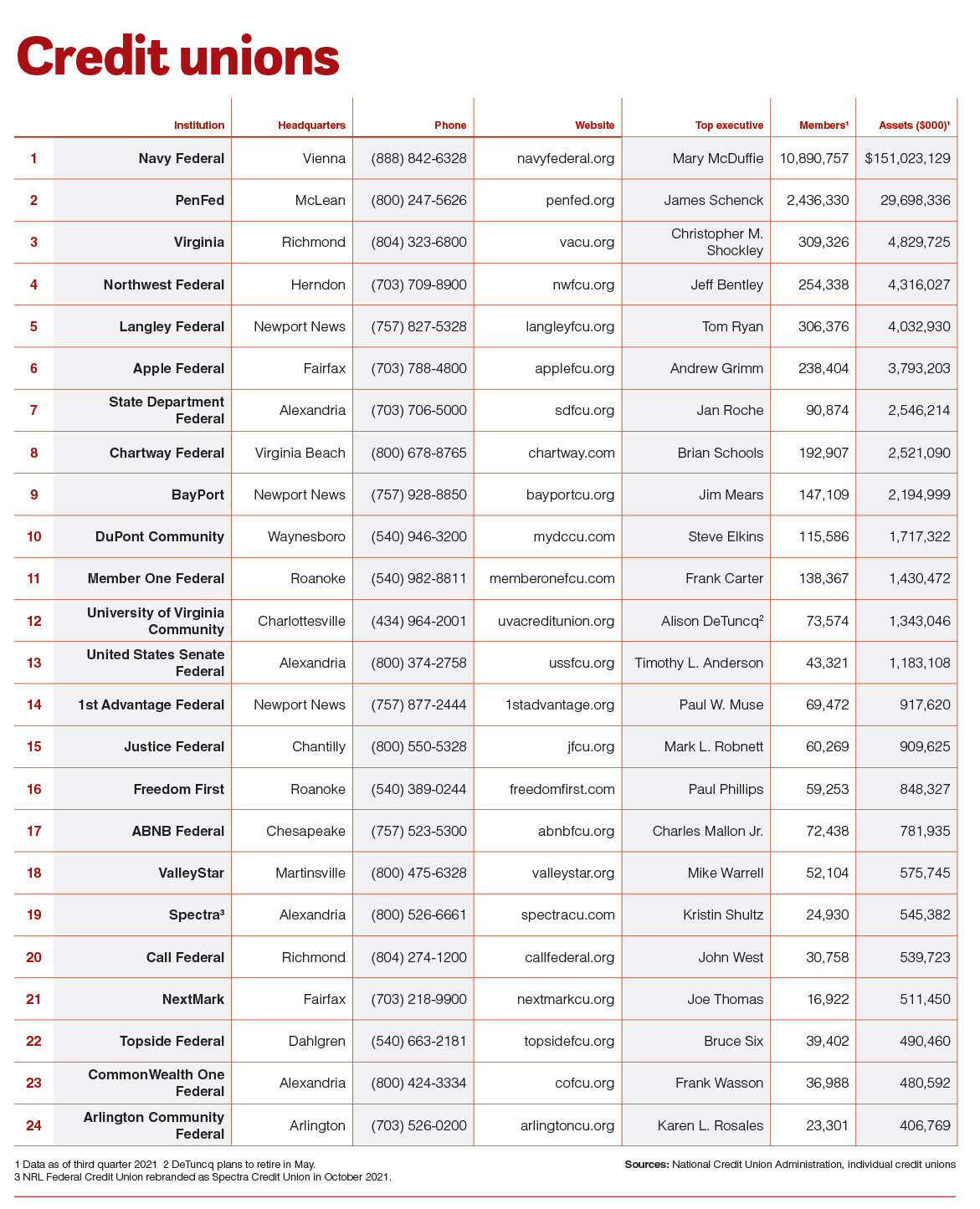 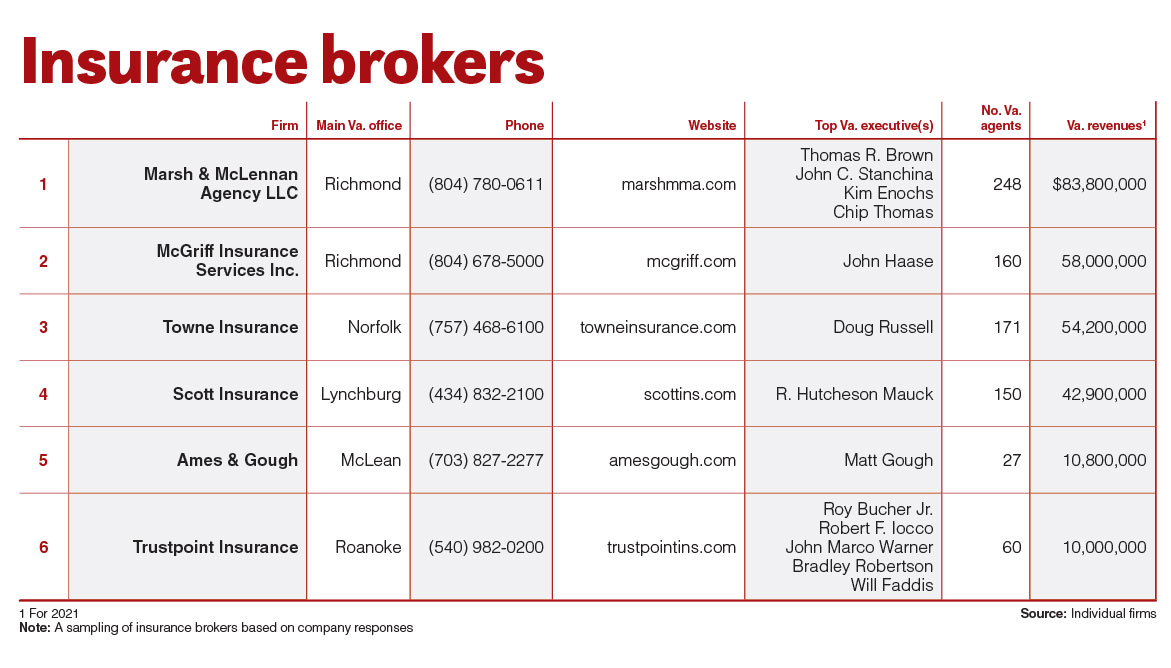 Morgan Stanley to acquire E-Trade for $13B

E-Trade had the second highest amount of deposits in Virginia as of June 30.

Arlington-based online brokerage to be bought by investment bank