The main event in the city of Norfolk on Friday night was The Main, the city’s newest downtown hotel and conference center. Dancers danced, champagne flowed and the governor of Virginia anointed The Main as a transformative property that will help reposition not only this port city, but also the state, as a prime tourism and conference destination.

This weekend’s “soft” opening, coming 10 days before The Main officially opens for business on April 3, is a private fundraising event with an ambitious goal of raising $1 million for Norfolk’s vibrant arts community. Norfolk is home to the Virginia Opera, the Virginia Stage Co., and the Virginia Symphony, among other arts groups.

Arriving guests were greeted by dancers whose movements and costumes evoked mermaids as they gracefully batted balloon-like balls back and forth in The Main’s light-filled atrium.  As people stood in line to get keys to their rooms, hotel staff delivered flutes of champagne. According to event organizers, about 500 people had registered for the arts-focused weekend, with some  packages selling for as much as $1,600.

By early evening, when McAuliffe showed up for the reception, members from the business, local government and arts communities turned out to toast the 22-story glass tower and Hilton-branded luxury hotel that sits at the corner of Main and Granby streets.

Asa Shield, a financial consultant for CCP, a commercial real estate firm in Virginia Beach and a member of the Virginia Symphony board, said The Main “will upgrade downtown Norfolk. This is something we need to attract conventions and tourisms. As for the business community, it will be good because it’s a convenient location for meetings and for guests to stay.”

The imprint of the region’s business community was apparent at the gala. TowneBank served as the main sponsor, and other companies, such as Norfolk Southern Corp. and the law firm of Kaufman & Canoles sponsored specific events. Kaufman & Canoles sponsored a Friday night dinner theater presentation of excerpts from “The Wiz” by Virginia Stage Co. and Norfolk State University.

Besides the dinner theater, guests spent the evening dining at one of the property’s  venues – dancing at a Big Band bash or quaffing a few brews at The Grain, a fifth-floor beer garden that serves 100 craft beers.

In a public acknowledgment of the project’s developer, McAuliffe called Bruce Thompson, the CEO of Gold Key | PHR and one of the state’s largest hospitality operators, “the genius behind where we are standing here today.”

Just hours before the reception, Thompson, in jeans, was directing staff on where to move a tree sculpture.  He donned a suit for the evening’s festivities. After more than four and a half years of planning, to see the project open and filled with people “gives me goose bumps,” said Thompson.

Thompson, in partnership with the city of Norfolk, built the project with help from the state’s tourism development financing program.  Virginia is one of seven states with some form of tourism development gap financing. It assists developers and localities that partner and apply for the financing, which doesn’t kick in until after a facility opens. A developer can apply for as much as 20 percent of a project’s total cost on facilities of more than $100 million. With The Main, Thompson and the city applied for 9 percent of the financing on the $77.5 million expected cost of building the 300-room hotel portion of the project, said Wirt Confroy, director of business development for the Virginia Tourism Corp.  The Main is expected to create 250 fulltime jobs, Wirt said.

“The great thing about this program and why the state likes it so much, this is not money taken from another pot and given to the locality,” explained Confroy. “All the money the state contributes is from the new taxes from the new revenue that the project creates … It’s a performance-based tax rebate, really. “

The city of Norfolk also kicked in funding to help with parking and the construction of The Exchange, the hotel's 50,000-square-foot conference center. Norfolk Mayor Ken Alexander said The Main gives Norfolk the state’s largest ballroom – about the size of a football field – which will enable the city to be more competitive in drawing events.  With about 6,000 people now living downtown, it also provides a new gathering place.

Other city officials noted that 2017 is turning out to a banner year for new development in Norfolk with the May opening of the new Waterside District, a short distance from The Main on the city's Elizabeth River waterfront, and the June opening of Norfolk Premium Outlets.

Rob Uhrin, a principal with Cooper Carry, said the hotel was designed to actively engage the community with plenty of public spaces, including outside patios off the beer garden and a small outdoor park off the building’s main first-floor seafood restaurant, Saltine. “The days of having an experience for only the hotel guest, those days are long gone,” he said. “It’s all about locals coming in and interacting with the people who are visiting.”

Uhrin, who works out of the Atlanta-based design firm’s Washington, D.C. office, said The Main could just as easily be in New York City as Norfolk. For a 500,000 square-property to have three high-end food and beverage outlets is unusual, he said, and was part of Thompson’s vision for the facility to be a local gathering place. One of the biggest challenges, Uhrin added, was positioning the property on what was a relatively small sliver of land. The response was “stacking ballroom upon ballroom and stacking the parking. One of the biggest challenges in a stacked situation is moving everyone up and down.” A part of the solution to that piece is the facility's dramatic escalator, which moves people from the first to the third floors, allowing visitors to look out onto city streets and offering views from the street into the hotel. “You can see the activity . That is exposed to the street. So it's engaging the whole civic environment. That's why I think it works,” said Uhrin.

As with any opening night, there were a few glitches.  Some visitors attended the governor’s reception in the attire they arrived in, because luggage didn’t get sent to their rooms on time. An electrical outlet in the main lobby didn’t work.  All in all though, The Main’s Managing Director Kurt Krause said he was pleased with how the first night’s events had gone.  By that point, he had been up for 17 hours, and was looking for a good night’s sleep.

The event continues through Sunday with special art exhibits and a performance tonight by the Virginia Symphony Orchestra and Broadway singer Kelli O’Hara. 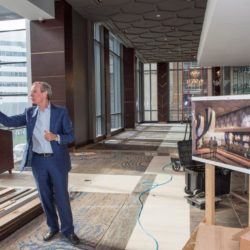