Just a year and a half ago, it wasn’t uncommon for a truck at the Virginia International Gateway to spend two to four hours waiting to pick up and drop off cargo.

The Port of Virginia would open the gate at 1 a.m. and wouldn’t close until 10 p.m. “It wasn’t a sustainable system,” says Mark Higgins, director of motor carrier experience for the port.

But the Trucker Reservation System (TRS), introduced in March 2018 at Norfolk International Terminals (NIT), has improved turnaround times dramatically in the past year. As more truck drivers have registered and make reservations before coming to the terminals, speed and efficiency have increased. Trucks that serve the port now have radiofrequency identification (RFID) tags that connect with the port through the PRO-PASS trucker access portal system.

For the month of January, 53.86% of trucks at all terminals had a turn time of 30 minutes or less. Additionally, 90.64% of trucks at the port had turn times of under an hour.

The system has helped improve the productivity of port logistics provider NFI/California Cartage. “The appointment system has been very successful from my standpoint. Turn times have improved tremendously,” says Chesapeake-based vice president Tommy White, who runs company operations up and down the East Coast. “The Port of Virginia is more competitive with other ports now. Last year’s turnaround time was the best in four years.”

The speedier times are a huge shift from October 2018, which was one of the most challenging months at the port in recent history. During that time, 14.13% of all trucks at VIG spent two to four hours inside the terminal. In January, that number decreased to less than 1%.

Currently more than 75% of all moves are completed during mandatory appointment hours — 6 a.m. to 3 p.m. weekdays — at both NIT and VIG.

Thanks to the reservation system, the port is able to operate fewer hours a day and still be more efficient. In January, it pushed back the opening time from 5 to 6 a.m., with a closing time of 5 p.m.

“We used to open on Saturday, but because of efficiency we eliminated the Saturday gates and moved the opening hours,” explains Higgins. “We can do more containers per day.”

With less cargo moving during the coronavirus outbreak — including the period when the virus was largely contained in China — the port has been preparing for a quick comeback, says port spokesperson Joe Harris. He anticipates adding additional hours this summer to handle greater cargo volume.

Higgins notes that the TRS, which helps spread truck volume out during the day and largely eliminates rush hours, also helps the port make quick adjustments. “Now we have the flexibility if the volume is good to open on Saturday if we need to. For the motor carriers, it’s really about consistency and having a predictable experience.”

The port is also able to open slots at 9 a.m. for next-day appointments. “That allows us to organize the yard in an efficient manner,” Higgins says.

The elimination of rush hour at the gates in early mornings and late afternoons is one of the benefits of the appointment system, including for commuters who used to get caught in traffic backups, Higgins says.

Ed O’Callaghan, president of Audax Transportation in Norfolk, an agent for Century Express, acknowledges that it was a challenge in the early days of TRS to get appointments at the port. “But between March 2019 and March 2020, the lines had dropped down,” he says. “It was much easier to get an appointment the same day.”

The system still isn’t perfect, Higgins says. “We have learned a lot in the course of the last year and a half, and we are still learning. Sometimes motor carriers don’t get the schedule they want. But by the end of the day they deliver more containers than previously in a much more efficient manner.” 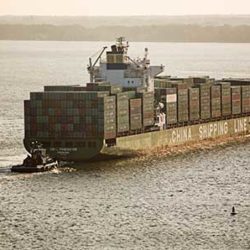