Goochland County-based CarMax Inc. made the Global 500 for the first time this year. Its revenues were about $33 billion, up 65%. CarMax also ranked 174th on the Fortune 500 list this year.

The other Virginia-based companies that made the list are:

432) CarMax, Goochland County (was not on the list last year)

At least two other companies — Raytheon Technologies Corp. and The Boeing Co. — that made this year’s Fortune Global 500 list are in the midst of moving their global headquarters to Virginia, or will soon.

Boeing ranked No. 204 on Fortune’s Global 500 list for 2022, falling from its previous rank at No. 173. The company, which had $62.2 billion in revenue in fiscal 2021, announced the move of its global headquarters from Chicago to Arlington’s Crystal City, where it already has about 400 employees, in May.

Raytheon followed Boeing’s announcement in early June, announcing it would also move its headquarters from Waltham, Massachusetts to Arlington’s Rosslyn neighborhood in the third quarter of this year. Raytheon ranked No. 197 on the Fortune Global 500 this year, falling from No. 183 last year. The company reported $64.4 billion in fiscal 2021 revenue. Its new location won’t be far from its existing Raytheon Intelligence & Space business, where about 130 corporate staffers already work.

Neither of the company’s moves are expected to involve major staff boosts.

And while Amazon.com Inc.’s headquarters are in Seattle, the e-tailer is building its $2.5 billion HQ2 East Coast headquarters in Arlington County. The company recently closed on its $198M PenPlace development, which is slated to include the distinctive Helix tower. 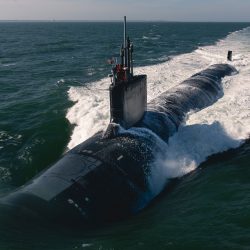 Will be located in $1B Innovation Campus