When city workers installed the new signs for Arthur Ashe Boulevard, renaming one of the city’s most historic and visible streets, Richmond took a leap foward, and the nation noticed. On a steamy day in late June thousands of people crowded on the front lawn of the Virginia Museum of History & Culture and piled onto the street (formerly known as the Boulevard) to share in the celebration of tennis legend and humanitarian Arthur Ashe, a Richmond native. 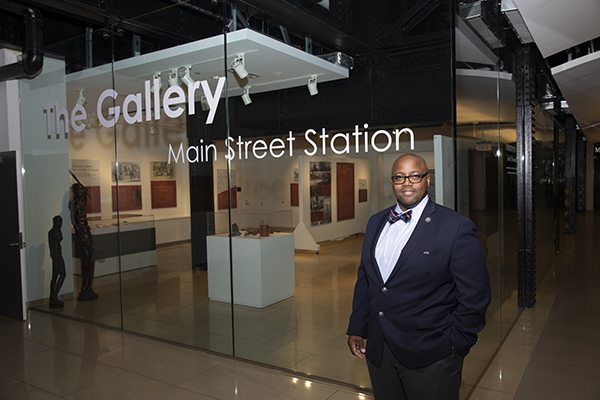 It’s that type of change that brought Leonard Sledge, Richmond’s new director of economic development, to the city.

“I think Richmond is a city that is consistently looking to tell all sides of its history and have people see all sides,” says Sledge. The former executive director of Georgia’s Henry County Development Authority, he also previously served as economic development director for Hampton.

“The renaming of Arthur Ashe Boulevard was tremendous. There’s an amazing opportunity for Richmond to grow, and I’m going to do the best I can in terms of leading economic development.”

Arthur Ashe Boulevard also will be home to “Rumors of War,” the first public sculpture by Kehinde Wiley, the world-renowned artist who painted the official portrait of former President Barack Obama.  A response to Richmond’s famed equestrian Confederate monuments, the massive bronze statue represents the Virginia Museum of Fine Arts’ biggest financial acquisition. The museum, however, has not disclosed how much the privately funded sculpture will cost. “Rumors of War” will debut in New York City’s Times Square in September before the piece is permanently installed on the VMFA’s front lawn in December.

The changes taking place in the Richmond region, which has a population of 1.3 million, has attracted new employers to the area. Currently there are seven Fortune 500 companies headquartered in the region, including Henrico-based Altria Group and Goochland-based CarMax.

The Greater Richmond Partnership markets the area to business prospects on behalf of the city of Richmond and Henrico, Chesterfield and Hanover counties.  “This is important to ensure that we share the full spectrum of the economic development opportunities in the region and the continued recognition that our respective citizens do not all live and work in the same locality,” Sledge says.

The partnership welcomed its new president and CEO, Lara Fritts, in August. She is only the third person and the first woman to fill that role in the organization’s 25-year history.

The region’s business pulse
Richmond has outgrown its reputation as a staid Southern metro area.Named a top food destination by the crowdsourced business-review site Yelp, Richmond enjoys regular national attention for its dining and beer/spirits scene. The city’s Scott’s Addition neighborhood, once a gritty industrial area, has been reborn as a hotspot for restaurants and breweries.

Another change has been the introduction of a rapid-transit bus system linking the city’s east and west ends. The  GRTC Transit System’s Pulse service celebrated its one-year anniversary in June, with ridership averaging double its initial goals. The Pulse recently earned a Bronze Standard BRT rating by the New York-based nonprofit Institute for Transportation and Development Policy.

“The evolution of transit in Richmond creates opportunities for more transit-oriented development,” says Sledge. “A great example of this is the Sauer Center development, which is across the street from a [Pulse] station.” A 40-acre mixed-use, multimillion-dollar project under development on West Broad Street, the Sauer Center will be anchored by the city’s first Whole Foods grocery store.

Also in the works, NH District Corp., a nonprofit led by members of the corporate and civic community and chaired by Dominion Energy CEO Tom Farrell, has proposed the $1.5 billion redevelopment of a downtown Richmond neighborhood anchored by a 17,500-seat arena on the site of the now-shuttered Richmond Coliseum.

If approved by City Council, the Navy Hill development also would include more than 2,500 apartments plus hundreds of affordable housing units. In addition, the plans call for a 541-room high-rise hotel and 1 million square feet of commercial and office space. It will also restore the historic Blues Armory as a food market and include a GRTC bus transfer station. The developers expect the project to have a $3 billion economic impact on the region, including $1.2 billion in wages.

Special delivery
Thanks in part to these developments, the economic picture for the city is on the upswing. In fiscal year 2019, Richmond’s economic development office helped 18 businesses locate or expand in the city, investing more than $67 million and adding more than 1,200 jobs. 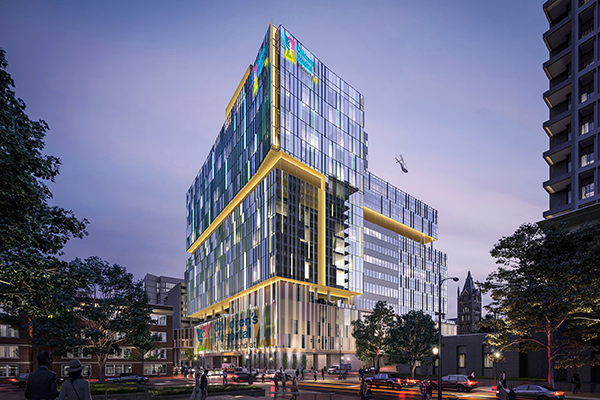 That investment total, however, does not include the $350 million expansion of the Children’s Hospital of Richmond at VCU. The 16-story, 500,000-square-foot inpatient facility will include trauma and emergency care and house 86 patients, with the potential to expand to 125 beds in the future. The facility is scheduled to open in 2022.

Another significant development is Amazon’s new $10 million specialty fulfillment and last-mile delivery center on the Virginia Interstate 95 Logistics Center site near the Port of Virginia’s Richmond Marine Terminal. Announced in July and scheduled to open in October, the 461,700-square-foot center is expected to create 150 jobs, adding to Amazon’s existing 10,000 employees in the state.

Amazon is the second major company to lease a building in the center. Brother International Corp., a significant Port of Virginia user, relocated its East Coast distribution center from New Jersey to a 461,700-square-foot warehouse there earlier this year.

Sledge credits these moves in part to California-based Panattoni Development Co.  It made the strategic decision two years ago to develop spec Class A industrial warehouses near the Richmond Marine Terminal, helping attract logistics operations to the city. “The projects demonstrate that Richmond is a great location for advanced manufacturing and e-commerce,” Sledge says. “We are glad that more developments like Hourigan’s Deepwater Industrial Park are being developed to help us attract more advanced manufacturing and e-commerce projects to the city.”

The growth of existing companies in the city is also adding to its economic picture. Chicago-based LBP Packaging acquired Richmond-based Dominion Packaging’s Quick-Service Restaurant business in late 2018. LBP is creating   118 jobs and investing approximately $19.7 million in the Richmond operation.

The city’s big challenge is making sure there is a diverse mix of buildings available to “respond to companies that express an interest in locating here as well as existing companies who desire to keep growing in the city,” Sledge says. “Another challenge the city is aggressively addressing is the development of quality affordable housing so people will have great opportunities to both live and work in the city.”

These high-capacity cable systems give the region increased access to European and South American markets through cables that run to Spain and Brazil. Offering 200 terabits per second of ultrahigh transmission capacity, “Marea has the fastest connectivity ever in the world so far,” says Romanello. “You could send every movie ever made across the Atlantic to Spain in 42 seconds.”

Henrico has seen a flurry of economic activity this year “in all sectors,” says Romanello.

Early next year, the first-phase buildout of Facebook’s 970,000-square-foot data center is scheduled for completion in Henrico’s White Oak Technology Park. The $1.5 billion project will have 2.4 million total square feet and create more than 200 jobs when complete. The project has generated more than 1,300 construction jobs. Facebook is also investing $250 million in solar farms to support its data center investment.

Meanwhile, Swedish manufacturer Alfa Laval Inc., which specializes in heat transfer, separation and fluid handling, has added a new production line at its plant in eastern Henrico, creating 15 jobs. The addition is part of the company’s $50 million expansion at three of its U.S. plants.

Stonebridge is a redevelopment success story. The mixed-use revitalization project is home to Kroger Marketplace, one of the grocer’s largest stores in the mid-Atlantic region. Created in a public-private partnership led by the Chesterfield Economic Development Authority, Stonebridge also includes apartments, shops, a senior center and the Richmond Volleyball Court.

“The new hotel and conference center position Chesterfield to take advantage of sports tourism activity. Sports tourism is a key component and the No. 1 tourism generator for the region,” says Karen Aylward, assistant director for Chesterfield County Economic Development. “There hasn’t been a full-service hotel built in the county in a couple of decades.”

In other economic news in Chesterfield, electrical connectors manufacturer ERNI Electronics Inc. is building a    $25 million national headquarters with a production and distribution facility at the Waterford Business Park. The project will create approximately 105 jobs.

Hanover’s banner year
Fiscal year 2019 was Hanover County’s most successful year on record. The county saw more than $350 million in investments during the year with the expected creation of more than 2,700 jobs. 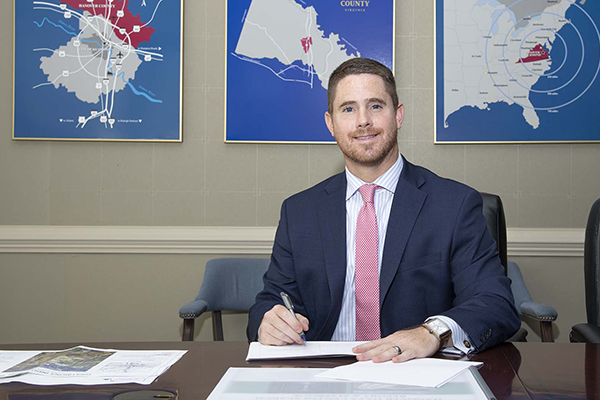 “We are having some of the strongest years we have seen,” says Linwood Thomas, the county’s director of economic development. “We are attracting interest from major corporations, both national and international.”

Currently, vacancy rates for industrial space are under 1%, so the county has created a speculative building program to encourage construction of multi-use structures. “That has generated a lot of attention,” Thomas says. “It’s the first of its kind in the state. We just announced our second speculative building by national developers, TPA Group of Atlanta. They will be building a 250,000-square-foot speculative building in the Lakeridge Parkway corridor.”

Raleigh, North Carolina-based developer Brookwood Capital Partners started construction on Hanover’s first speculative building earlier this year. Completion is anticipated by the end of the year. The 150,000-square-foot building, also in the Lakeridge Parkway corridor, is already fully leased. Hanover-based Wine & Beer Supply is the latest tenant to sign on.

Hanover scored its largest project when Canadian-based Cascades Inc. announced it plans to invest $275 million in a lightweight recycled-containerboard operation in the former Bear Island Paper Mill. Expected to open by 2022, the project will create 140 jobs.

Furthermore, the Virginia Department of Forensic Science announced this summer that it’s building a 283,000-square-foot facility in Hanover to house the Central Forensic Laboratory and Office of the Chief Medical Examiner.

The upcoming months also look promising, Thomas adds. “We will have some major announcements of well-known companies.”