Work starts on Amazon HQ2, while other big projects conclude

As several economic development officials have noted wryly over the past year, the construction crane appears to be Virginia’s new state bird. Labor shortages and expensive materials still impact the industry, but by and large, construction companies are busy across the commonwealth.

In January, demolition started at the site in Arlington County where Amazon.com Inc. plans to build its two towers in the first phase of HQ2, its East Coast headquarters. Bethesda, Maryland-based Clark Construction Group, the lead contractor for Metropolitan Park, is expected to finish the two 22-story buildings by the end of 2022.

In Alexandria, construction continues on Carlyle Crossing, a $400 million, 1 million-square-foot project anchored by a Wegmans supermarket and offering 775,000 square feet of residential space. The project’s first phase is expected to be finished next fall, according to developers Stonebridge Associates and Creek Lane Capital, which broke ground last July.

Tysons also has plenty happening. Last fall, Fairfax County supervisors granted approvals for The View, a 3 million-square-foot mixed-use project from Clemente Development Co. Inc. that will include the tallest skyscraper in the state, the Iconic Tower.

In Hampton Roads, the $68 million, 285,000-square-foot Virginia Beach Sports Center is expected to open in November, offering space for 22 sporting events and 41,000 athletes in its first year. The center will have 12 basketball courts, a 200-meter track and seating for 5,000 spectators. Chesapeake’s $300 million Summit Pointe development is finishing up phase two, which includes the 150,000-square-foot office building 555 Belaire and the Helix, a mixed-use residential, retail and restaurant building.

Last spring, Dominion Energy Inc. opened the first of two new office towers in downtown Richmond, a 1 million-square-foot, 20-story glass-heavy structure designed by Kendall/Heaton Associates and constructed by Richmond’s Hourigan and Chicago-based Clayco, with space for about 1,200 employees. As of February, Dominion was preparing to implode its former 21-story office building, One James River Plaza. A second office tower is expected to be built on that site, according to plans filed by Dominion in 2018, but so far, the utility has not yet announced when or whether it will go forward with those plans.

Charlottesville has more than 500,000 square feet of office space under construction, a big footprint for the small university city. Projects under construction late last year include the Center of Developing Entrepreneurs (CODE) building owned by hedge fund founder and philanthropist Jaffray Woodriff, the Apex Clean Energy building and 3Twenty3, where McGuireWoods LLP and CoConstruct LLC have signed on as tenants, although work stopped in January after a crane collapsed at 3Twenty3, injuring a worker. 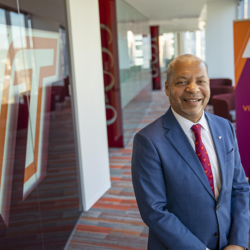