Shenandoah University will launch new undergraduate degree programs next fall that will establish an academic foothold in the expanding world of virtual reality and esports. 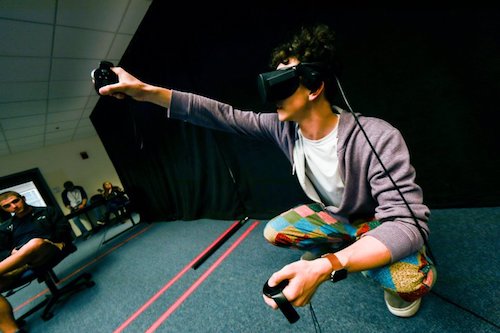 The university is announcing this afternoon in Winchester that it will offer bachelor of arts and science degrees in virtual reality design and a bachelor’s of science in esports, or video game competition.

“We believe a significant number of careers will live in virtual reality,” says J.J. Ruscella, executive director of the Shenandoah Center for Immersive Learning (SCiL) and associate professor of theatre.

Immersive experiences such as training and simulation videos that students produce through SCiL will be a game changer not only for education but also for how industry will train workers for ever evolving jobs that now don’t even exist, he says.

“You remember when web design came out in the ‘90s and you needed someone to design a website and the only person you could turn to was a high school student?” Ruscella says. “That is sort of happening with virtual reality.”

Corporations are turning to universities to produce simulation-training videos, he says, giving students the opportunity to work on real-world projects.

SU already has an augmented and virtual reality (AR/VR) program.  The esports program is new, although the university currently has a varsity team competing in video-game matches. Both programs also will offer minors and certificate options.

Esports has rapidly become one of the fastest-growing segments of the commercial entertainment industry, according to Joey Gawrysiak, associate professor and director of sport management.

In esports, competitors face off in video games such as Call of Duty, League of Legends and Madden NFL that have a global audience.  Fans can attend live events or watch from home via streaming services.

The esports degree will offer three tracks in which students focus on management, coaching, or media and communications, positioning graduates well ahead of other applicants in competing for jobs in the industry, Gawrysiak says.

In researching the degree program, he says, industry professionals told him many applicants think they are qualified simply because they play video games.

His students, for example, will learn how to produce a match that is live-streamed, as opposed to a broadcast production of a traditional sporting event.

Although most jobs now are in management and marketing, he says, coaching slots are increasing as esports trickle down from the professional level to colleges and even high schools.

Players used to compete “for energy drinks, not million-dollar prizes,” he says, and this change has brought a new emphasis on sport science and psychology “to optimize performance and minimize injuries.”

“It’s following the traditional sports model,” he says, and he does not see the two as mutually exclusive.

“I see none of the stereotypical ‘jocks vs. nerds,’’’ he says.  Often, in fact, the jocks are the nerds as traditional athletes also play on esport teams.

For the AR/VR design program, SU has partnered with Immersive VR Education, a software company in Ireland that provides a platform called Engage.  Ruscella says Engage will allow SU to focus not on software development but on “human experience design.”

The BA program will prepare students for careers producing content for AR/VR and related disciplines through a concentration in either VR Media or Digital Stages.

The BS focuses on careers for technical specialists and programmers in AR/VR or related fields.

But they can also create training experiences, such as how emergency responders should handle a suicide threat, by simulating  “life moments” in real-time work scenarios so that “the novice is a veteran even before they take their first step on the job,” he says.

“This has been the gap that education has had between delivering knowledge and developing skills,” he says, as classroom training does not always translate to the workplace. “Now we can recreate the work experience in the education experience.”

Such simulation training grew out of earlier collaborations between theatre majors and health-care students, two of the university’s largest programs, he notes.  Now as VR simulation is increasingly used by corporations for training, the videos also will be a way for actors “to make their daily bread” while trying to land their Broadway roles.