Phoenix Group LLC, a service-disabled veteran-owned small business in Chesapeake, recently was awarded a $282,000 contract to provide firefighting equipment and gear to a new firefighting school in Southeast Asia.

Given that more than 80 percent of the company’s other work is for the U.S. Department of Defense, this latest contract doesn’t rank as its biggest or most prestigious. It may, however, be one of the most meaningful to its long-term viability.

Why? It’s the first major international contract that the Phoenix Group has gained since enrolling in the “Going Global” Defense Initiative (GGDI) to diversify its revenue streams. Virginia Economic Development Partnership (VEDP) began the program to help defense contractors offset the effects of federal budget cuts by finding opportunities in new markets.

Through the program, Phoenix Group has received:

“We couldn’t have done any of this without the work and guidance from VEDP,” says Stephen Clock, Phoenix Group’s national sales director. In addition to its work with the firefighting school, the company also has sold hazmat suits, respiratory equipment and other products to customers in Europe and Taiwan.

Clock expects to hire two new employees soon to handle international sales. “Honestly, it would have taken years of work on our end just to make the connections that VEDP was able to provide to us, much less the rest of what we’ve been able to accomplish,” he states.

Program’s future uncertain
Phoenix Group is one of 224 Virginia-based defense contractors that have enrolled in GGDI since its start in mid-2013. The program began with a $2 million budget from state appropriations and a federal grant and was renewed for another year.

Its future now, however, is uncertain. No money was set aside for a third year of GGDI operations in the revised budget recently passed by the Virginia General Assembly. VEDP, however, is attempting to identify enough savings from its existing appropriations to apply for — and win — a matching federal grant.

“We’re hopeful that we’ll pull together the funds,” says Paul H. Grossman Jr., vice president of international trade for VEDP. “We wouldn’t be trying if we didn’t think it was possible.”

From the start, Virginia’s defense contractors enthusiastically signed up for GGDI, Grossman says. All of the program’s available slots were filled quickly, with 160 companies accepted in the first year (and more placed on a waiting list) and an additional 64 enrolled the second year.

“You can interpret that in one of two ways: It’s great that the program has been oversubscribed, but it’s bad because it reflects how desperate Virginia defense companies are with regard to declining federal spending,” he states.

Virginia is a leading recipient of federal dollars, and a major portion of that money involves defense spending. More than 5,000 defense contractors make their home in the Old Dominion, largely in the Northern Virginia and Hampton Roads regions. They had $41.5 billion in DoD contract awards in fiscal year 2013, according to a report from the department’s Office of Economic Adjustment.

Sequestration — automatic federal budget cuts that took effect in 2013 — hit Virginia companies and the commonwealth’s tax coffers especially hard. That is one reason many GGDI enrollees are pivoting their focus to overseas revenue opportunities — either by selling to foreign defense agencies or by developing nondefense applications for their products and technologies.

“To be a company that has never sold overseas is pretty scary, because, if you don’t conform to U.S. export law, you, as principal, can go to jail,” says Grossman. “So, through this program, we’ve been able to bring in not only our own staff, but we can contract with law firms, consultants and other experts in the field to help these defense companies feel comfortable about pursuing and doing business internationally.”

The 224 GGDI companies, which have 30,000 employees, now are projecting, on average, a 120 percent increase in international sales during the next two years.

International leap
One of them is Cask LLC, an economically disadvantaged-woman-owned business and technology services firm in Stafford whose customers include the U.S. Marine Corps and U.S. Navy. Thanks to a $12,000 grant through GGDI and VEDP’s guidance and advice, Cask has put together a robust export compliance program in eight months and now sells to international customers.

“We’ve gone from being able to do absolutely zero work overseas to what is now unlimited potential,” says George Judd, director at Cask. He notes that, before enrolling in GGDI, approximately 70 percent of the company’s business was with U.S. defense agencies. “It’s opened up the world to us.”

For example, Cask recently performed work in Romania, defining the requirements and technical specifications for a new legislative affairs system, and now is providing support services as part of a mergers and acquisition effort for a global shipping company in Singapore. Cask also has submitted proposals for projects in Brazil and Colombia and soon will travel to Saudi Arabia to create a joint venture with a Saudi company.

According to VEDP, the average Virginia defense contractor gets 68 percent of its revenues from U.S. defense agencies. “It’s simply not diverse enough to be a good business model,” Grossman says.

Most companies have long recogn­­ized their vulnerability to budget cuts, but they haven’t had the funds, time or resources to pursue new revenue sources, especially overseas. 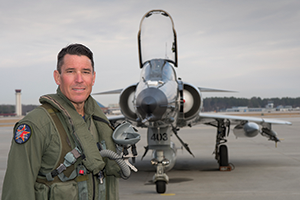 “We have such a narrow niche focus, and we knew that we had to go international if we wanted to expand our business base, so this program allowed us to go exactly where we already wanted to go with our strategic plan,” Bannon says.

“We’ve been able to get out in front of different markets, so potential customers can get a sense of what we do,” says Bannon, adding that the long lead times involved in ATAC’s business means that it likely won’t see any results soon. “Time will tell if this will bring any upside to our revenues, but it’s not hurting, I’ll say that much.”

Renewed U.S. engagement in the Middle East and support for the Ukrainian government in its fight with pro-Russian insurgents could spark renewed U.S. defense spending, Grossman says, but any increases likely will be targeted and temporary. “The dynamics of ever-increasing defense budgets are gone,” he says. “So defense companies need to continue their diversification efforts.”

They might have to do that without the help of GGDI, however, which will cease to exist on June 30 without further funding.

Stephen Clock at the Phoenix Group hopes that the VEDP finds the money to keep the program going. “We’re off to a great start, but we’re not where we need to be yet,” he says. “We still need help to keep growing internationally.”