Law-enforcement officers and firefighters suffering from post-traumatic stress disorder will be entitled to workers’ compensation under a bill that is headed to the Senate floor for a vote.

The bill, SB 561, will provide that PTSD incurred by first responders is covered by the Virginia Workers’ Compensation Act if a mental health professional diagnoses an individual as suffering from post-traumatic stress disorder as a result of an event occurring in the line of duty on or after July 1.

Sen. Jill Vogel, R-Fauquier, who introduced the bill, addressed the need for this legislation following the mass shooting in Virginia Beach last year.

“There was some discussion … regarding the impact on local governments, specifically what had happened in Virginia Beach and what that traumatic event had caused in terms of potential people who would be covered under legislation like this bill,” Vogel said. “I think the number was 240 [first responders] that this could include if this legislation passed as a result of the Virginia Beach tragedy.”

Vogel said the bill will make PTSD an occupational disease.

Erin Rice of the Virginia Professional Fire Fighters clarified that the number of first responders in need of treatment was a rough estimate.

“The 240 number is basically just an exposure report, meaning there were 240 people who responded to the scene and in some way had an exposure,” Rice said. “It’s very common for firefighters to do this when they respond to an incident; they were actually instructed from the folks there and Virginia Beach’s Risk Management to provide that number. That does not mean that all of those individuals are seeking PTSD [treatment].”

Rice spoke in support of this legislation because it would treat mental health issues like any other physical injury sustained in the line of duty, she said.

Virginia Beach police officer Chelsea Lindemeyer understands the detrimental effects of PTSD. In June 2017, Lindemeyer’s husband was serving a search warrant when a suspect opened fire, shot one of the officers twice and trapped six officers in a stairwell while continuing to shoot at them.

“[My husband] was physically injured in this incident, but his mental injury was not dealt with; he suffered for two years from undiagnosed PTSD,” Lindemeyer said.

Then, there was the Virginia Beach shooting last May 31, she said.

“My husband was one of the first officers into the building where a city employee was actively shooting people. He was heavily involved in the aftermath, and remained in the building for over four hours, hearing the cell phones ring over and over again,” Lindemeyer said. “As a result of both mental injuries, he has been diagnosed with complex PTSD and is still trying to navigate workers’ compensation due to the fact that they don’t recognize PTSD in law enforcement.”

Detective Carrie Fair is a retired Virginia Beach police detective who had to step down after enduring physical injuries when a search warrant turned into a shooting in June 2017.

“I was one of the officers that was trapped in the stairwell. I was with [Chelsea Lindemeyer’s] husband Travis during that time,” Fair said. “He saved my life and it offends me that I have received the help I had needed because I have a physical injury and that he has had trouble receiving the help that he needs because his is a mental health injury. I fully support anything PTSD related in this bill.”

John Heard, executive secretary of the Virginia Self-Insurers Association, stated his fiscal concerns in regard to this measure.

“Quite frankly we do not know what the total cost of this bill would be and we are very concerned,” Heard said. “I am the gentleman who read the numbers on Virginia Beach… and we would ask this committee to think long and hard before reporting a bill with this potential fiscal impact.”

Sen. Richard Saslaw, D-Falls Church, spoke in support of the bill, highlighting the Commonwealth’s duty to support these first responders regardless of cost.

The Finance and Appropriations committee voted 14-1 in favor of the bill, which was reported out on Tuesday.

The new School of Communication and the Arts has more than 2,000 students. 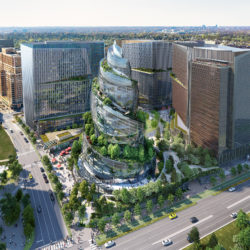