Bristol is two cities, but it’s one community on State Street

It takes two states to hold the diversity and bustle of Bristol, a historic community straddling a state line — with one foot in Virginia, the other in Tennessee.

Technically, there are two cities, both named Bristol and connected like Siamese twins — with two mayors, two police departments and two school systems. In this “Twin City,” look for one of each in either: a large library in Bristol, Va., and a tiny branch in Tennessee plus a large post office in Tennessee and a smaller one in Virginia.
Bristol, Tenn., boasts King University. Bristol, Va., unfortunately, lost its institution of higher education: the century-old but financially challenged Virginia Intermont College, which shut down after the spring 2014 semester.

There is one Bristol Chamber of Commerce, headquartered in Tennessee, but it serves both sides of Bristol. Similarly, the Bristol Herald Courier, the daily newspaper, circulates in both cities, though it has an office in Virginia and is published in Tennessee.

Settled in the mid-1800s and reached by railroad in 1856, Bristol has long been known as the “Shopping Center of the Appalachians.” Famous for its dual identity and shouldered by scenic mountains, it’s a community where it feels like you’re in a state stretching from Norfolk to Memphis. “You are living in two states at once,” says 35-year-old Christina Blevins. “But I think Bristolians don’t see the state line. You don’t see the differences.”

All merge on State Street, Bristol’s version of Main Street — with brass plates at the center marking Virginia on one side, Tennessee on the other. This historic thoroughfare was once actually known as Main Street in the late 1800s, but, back then, it was more commonly called “Mud Street” because it was often prone to wash-outs.

Today, Believe in Bristol is the Main Street program for both Bristols. “And, yes, our Main Street is called State Street,” says Blevins, the program’s director. “But that doesn’t matter. It’s the same program.”

The Main Street district has about 160 businesses in a 10-block area. That group includes restaurants like the Burger Bar, Macado’s and the Quaker Steak and Lube; large antiques stores; trendy clothing stores; a gallery by nationally known photographer Benjamin Walls; and the 756-seat Paramount Center for the Arts, a theater in Bristol, Tenn., that, ironically, has been the setting for Virginia-based beauty pageants.

“People are wanting to invest in this downtown,” says Jessica Turner, the curator of the newly opened Birthplace of Country Music Museum. “New restaurants are coming, one hotel, possibly a second. And that’s really exciting from a business perspective to see that.”

Tourism is picking up, too, says Karen Hester, who owns a gift shop called Cranberry Lane on State Street. “There are art galleries, jewelry stores, antique stores, tons of great restaurants. It’s a great place to spend a day or weekend. But, most especially, it’s a great place to live, too.”

State Street rarely has empty storefronts, Blevins says, and enjoys healthy foot traffic. “Our current success is a product of all of the different plans and efforts that have come before today,” says Andrew Trivette, the assistant city manager of Bristol, Va. “The people who are here now are really enjoying the fruit of that early effort.”

It hasn’t been easy, and it’s far from an overnight success story for the Twin City — with nearly 18,000 residents of Bristol, Va., and about 24,000 living in Bristol, Tenn. “Our community 20-plus years ago was like me, me, me,” Blevins says. “Everybody wanted to get credit for this, that or the other. I really feel like we’ve changed so much, and we’re all trying to work together and partner together and promote each other.” 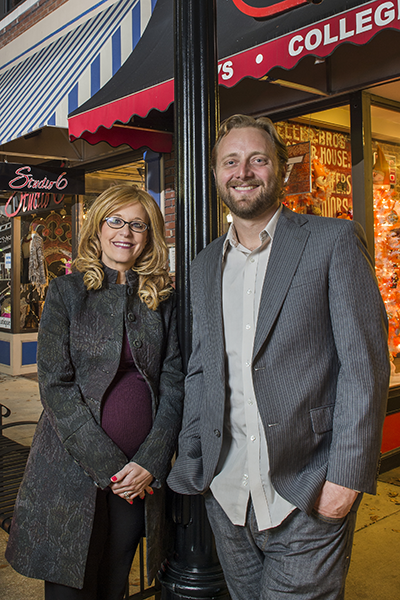 True to the name of her organization, Blevins and her husband, Eric, definitely believe in Bristol. “We were just volunteering for the organization. And we really put our money where our mouth is,” Christina Blevins says. “We have bought four buildings here in downtown, and we’ve revitalized three of them. We’ve built several lofts, and we have storefronts.”

Such a commitment has been appreciated by the storeowners of State Street, who say they see Blevins as one of them, even as she works to promote everyone. “And they know I’m going to work hard,” she says. “I felt like Bristol forever has been this jewel and that it just needed to be polished. And so many people feel that way. Everybody’s working really hard to polish that jewel.”

The community had sparkled before in the mid-1900s, when passenger trains stayed busy at the Bristol Train Station, a stately structure built in 1902 that has been recently renovated and restored. “Obviously, in the 1930s, Bristol’s downtown was a central business district,” Blevins says. “It was a place where everybody bought their goods and services. It was the economic and social hub — the focal point, basically, for the counties and the region.”

But downtowns like Bristol fell into disrepair by the 1960s and 1970s. “And it wasn’t just downtown Bristol,” says Blevins. “It was all Main Streets across America.”

Change came with the elimination of passenger trains, the opening of the interstate highway system and a shift in shopping habits. “That was where the mall came in,” Blevins says. “The mall was this newfound thing, and [for] all these businesses, that was the new thing. They moved to the mall.”

The survivors of the outward migration tried to make themselves more like a mall, Blevins says. On top of the movement to the mall came a natural disaster — “the flood of 1977, where all of downtown was in, like, four feet of water.” The flood wiped out businesses. “About 40 or 50 percent didn’t reopen,” Blevins says. “So, between the Bristol Mall and I-81 being completed and then the downtown flood, it was just a really, really sad time for Bristol.”

Rising up from the ashes, the musically rich heritage of Bristol today attracts an estimated 50,000 each year for September’s three-day “Rhythm and Roots Reunion” plus thousands more for a series of summertime concerts called “Border Bash.”

“It definitely did not happen overnight,” Blevins says. “We’ve been working on downtown revitalization since the early 1980s.”

Despite the recent downtown developments, it’s still been a tough year for the city, with the shutdown of Virginia Intermont College and its loss of faculty, staff and nearly 1,000 students. “We have been aiding Virginia Intermont since before its closure to try to find ways to invigorate the campus and, now, to find a new tenant,” says Trivette. “It’s an unbelievable asset. I think a lot of people who will come and tour the property will be surprised by what it has to offer.”

The Falls
Beyond State Street, the cityscape changes along I-81. For the past 20 years, retail growth has been healthy and relatively steady in the Exit 7 area on the north side of Bristol, Va. A Wal-Mart store opened here in 1995, signaling the start of a boom that has included a ribbon of restaurants, shops and hotels — with some flanking the banks of Beaver Creek, a watercourse that flows from the lush woods of the 400-acre Sugar Hollow Park to the downtown district.

Now, city officials are creating The Falls, a multimillion dollar development near I-81’s Exit 5. And they’re doing it by themselves on 140 acres of publicly owned land. “A large portion of it was vacant,” Trivette says. “There were some different small businesses that have, for the most part, been relocated.”

By October, the city had logged $45 million in general obligation debt but announced plans to issue revenue bonds to pay for the project. “The decision was made to proceed at the city’s cost largely because in the world of tenant attraction for a retail project, the competition is fierce,” Trivette says. “We are and have been competing with a development in Tennessee that’s less than five miles away from our location. And we felt like it would be detrimental to our project to delay construction.”

That other project, The Pinnacle, enjoyed the August grand opening of its anchor store, Bass Pro Shops, just south of the Virginia line. Other stores also have been announced for The Pinnacle, including the relocation of the Belk department store from the Bristol Mall in Bristol, Va.

A new state statute has allowed the city of Bristol, Va., to pay for the The Falls’ construction through sales tax collections, because it’s a development of regional impact, says Trivette. “What it allows us to do is to capture the sales taxes generated within the development boundary to pay development costs.”

The first business at The Falls plans to open next year — the anchor store, Cabela’s. “We’re going to have unique retail stores that normally would not be in this area,” says Catherine Brillhart, the mayor of Bristol, Va.

Other tenants on board include restaurants like Calhoun’s, Smoky Mountain Brewery and Zaxby’s, plus the relocation of a Lowe’s home improvement store from just outside the city limits in Washington County, Va. In future phases, still to be announced, Trivette says, “we have done a very good job at attracting retailers that would not commonly be attracted to our market.”

Those retailers “want to know who else is going to be here with me,” Trivette says. “And so you have to demonstrate that they won’t be on an island by themselves. It’s hard to attract a shopper to just one store. But if you have a plethora of complementary stores, then they can do a lot of shopping at one time, and the development flows better.”

Meanwhile, Bristol Mall has seen less and less foot traffic. First, blame the renaissance of the downtown and the Exit 7 boom. Then it was the recession in 2008. And, now, the mall is being squeezed by The Pinnacle on the south and The Falls on the north. In recent months, JC Penney shut its mall store. Now, Belk is leaving to open a new store at The Pinnacle next year.

With those losses, it would be easy to forecast doom. Yet Trivette is optimistic for the mall’s survival: “I do think that the Bristol Mall has opportunities that maybe it hasn’t explored yet,” he says. “There are tenants that prefer a closed mall to an outdoor shopping center, so those tenants will be ripe as they look for a way to get into this market to look at the Bristol Mall.”

Mayor makes history
Brillhart, a former banker, became Bristol, Va.’s first female mayor on July 1. “People say it’s historic,” the 54-year-old mayor says with a smile. “But I don’t think a whole lot about it. I just think this is a new position for me. And I tend to learn from what leaders have done in the past.”

A native of Big Stone Gap, Brillhart moved to nearby Abingdon in the 1980s, then relocated to Bristol in the 1990s. “When I moved to Bristol, our downtown was dilapidated,” she says. “It wasn’t in very good shape.”

Now, that’s changed. Practically all of Bristol has changed. “I tend to think that we have a very vital downtown compared to other cities. And I think there’s been a change since I moved here,” Brillhart says. “A big change.”

Bristolians have seen the power of working together, Blevins suggests — and especially in the downtown district, which Trivette says remains the key to the city. “Exit 7 and Exit 5 are very important to the strategic economic health of the city, just because of the taxes and revenues that they represent. But, really,” Trivette says, “what makes Bristol a place is our downtown.”