Phase Two of reopening in Virginia allows increased flexibility for restaurants, gyms, sports, and some entertainment venues, including:

In a statement issued Tuesday, Richmond Mayor Levar M. Stoney said,“Given the data landscape, the governor’s requirement that all Virginians wear face coverings and my trust in the Richmond community to look out for each other, I’m comfortable with our city entering Phase Two of Forward Virginia. However, we cannot forget that beating this disease for good will require avid community testing, contact tracing and stable isolation for COVID-19 positive patients. This is the biggest team project we’ve ever undertaken as a city, and it will continue to require compassion and cooperation from every one of us.”

Also announced by Northam Tuesday, Virginia’s public and private schools will be open this fall, although classrooms will be socially distanced and youth sports will be different than usual, with no shared equipment and no football tackles for the time being.

Virginia Superintendent of Public Instruction James Lane described the opening plan for school systems, which, like the state reopening plan, will take place in three phases. In Phase One, which is in effect now statewide, schools can open immediately for in-person special education classes and child care.

In Phase Two, which will be in effect statewide Friday, summer camps, preschools and some schools will be allowed to open. Phase Three, which will start when the state enters the phase, will allow all students to come to school, but with safety precautions including 6 feet between desks, daily health screenings for students and teachers, and staggered use of cafeterias or requiring students to eat lunch at their desks.

Lane said a comprehensive guide to the three phases will go out to schools today from the Virginia Department of Education, and that each public school must present its reopening plans to the VDOE, while private schools will send their plans to the Virginia Council of Private Education, which will then share the plans with VDOE.

More details will be out in coming days, Lane added.

As for youth sports, guidelines will include avoiding all intentional contact — such as a tackle on the football field — and not sharing equipment like helmets and bats, said Northam Chief of Staff Clark Mercer. For exercise classes, the rule of thumb will be maintaining 10 feet of distance between participants, he added.

In Confederate monument news, Rita Davis, the governor’s counsel, said that her office is ready to defend the governor’s decision to remove the Robert E. Lee monument in Richmond, which a Richmond Circuit Court judge placed under a 10-day injunction Monday night. Under the ruling, the statue can’t be removed before June 18.

A member of the Monument Avenue Preservation Group, Richmonder William Gregory, sued Monday to prevent the statue’s removal. He is a descendant of the original owners of the land the monument occupies.

The governor’s announcement to remove the monument — now with its pedestal covered in spray-painted graffiti — came last week as protests against police brutality and racism reached a fever pitch nationwide, including in Richmond. However, Davis said Tuesday that her office has been preparing for the past year for expected legal challenges over the statue’s removal from state-owned land.

The governor’s counsel’s office was not notified of Monday’s hearing, although it was not required for the court to do so, Davis noted.

“Let’s be clear about one major thing here. Though this monument was cast in the image of Gen. Robert E. Lee, the purpose of this monument was to recast Virginia’s history, to recast it to fit a narrative that minimizes a devastating evil perpetrated on African Americans during the darkest part of our past,” she said, her voice catching a moment. “The governor’s decision today to continue forward with trying to remove this monument takes us a step forward to reclaiming the truth of Virginia’s history and reclaim it for all Virginians. And we look forward to defending that in court.” 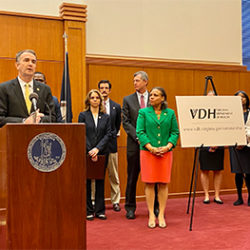 Reopening: Too early, or not soon enough?

Northam: NoVa will not enter Phase One on Friday