Schools may get authority to open before Labor Day

Summer vacation may be cut short for some Virginia students after two bills rescinding the so-called “Kings Dominion law” – which restricts schools from starting before Labor Day – passed the House this week.

House Bill 372 and HB 1020 would allow school districts to decide whether classes start before or after Labor Day. The difference between the two measures is that HB 372 would require districts to give students a four-day Labor Day weekend. Delegates approved both bills on split votes Tuesday.

Democratic Del. Schuyler VanValkenburg of Henrico, a co-sponsor of HB 36, which also sought to give school districts that authority, said there are academic benefits to starting school before Labor Day.

“We lose roughly two weeks of the school year that other localities get for things like advanced placement testing,” said VanValkenburg, who has been teaching for 12 years and is currently at Glen Allen High School.

Under the current law, school districts are required to start after Labor Day unless they obtain a waiver from the Virginia Department of Education.

To get a waiver, school districts must have been closed an average of eight to 10 days per year during any five of the last 10 years because of weather or other emergency situations.

Opponents of the bill include members of the tourism industry who argue an earlier start date takes away from their business. A later start date means a longer season for attractions like Kings Dominion and Busch Gardens. Both theme parks employ teenagers who would have to quit if school began earlier.

The “Kings Dominion law” was put in place in 1986 and has been challenged several times. Former Gov. Terry McAuliffe supported the law and opposed an earlier start date to the school year. Gov. Ralph Northam has yet to take a position on the topic.

“We support the ability of local school boards to determine the start date and the end date of the school year,” said Andy Jenks, director of communication and public relations for Henrico County Public Schools.

Jenks said that while he does support bills that give them this authority, the next step is to consult with the community to see what opening school date will work best for them, a process Jenks said could take up to a year. 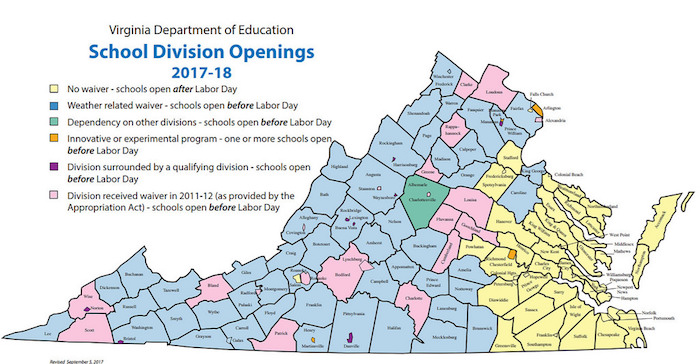