Virginia State Corporation Commission Judge Judith Williams Jagdmann has informed state legislators she plans to resign from the three-seat commission after 16 years on the bench. Her departure will leave two seats empty as of Dec. 31.

In a letter sent to the leadership of the Virginia State Senate and the House of Delegates on Nov. 16, Jagdmann says she will end her tenure on the SCC bench at the end of the year, while noting she will be available for recall in January 2023 to maintain a quorum and give the General Assembly an opportunity to elect her successor.

“I thank the General Assembly for four times electing me to serve the people of Virginia, as attorney general and member of the State Corporation Commission,” Jagdmann wrote. “It has been my honor and privilege.” Prior to serving on the SCC, she was appointed by the General Assembly to fill the vacancy as the state’s attorney general in 2005 and 2006 after Jerry Kilgore resigned to run as the Republican candidate for governor.

Jagdmann’s resignation leaves Judge Jehmal T. Hudson as the only sitting Virginia SCC commissioner. He is in his first six-year term on the commission, which governs utilities, state-chartered financial institutions, securities, insurance, retail franchising and the Virginia Health Benefit Exchange.

Angela Navarro, the state’s former deputy secretary of commerce and trade, was appointed as a judge in January 2021, replacing Mark Christie, the former SCC chairman, who was appointed to the Federal Energy Regulatory Commission in 2020. However, Navarro left office in March after Republican state legislators declined to elect her to a full term, and the split General Assembly was unable to come to an agreement on a replacement for Navarro earlier this year.

SCC judges are named by state legislators or, if they can’t agree on a candidate, the governor can name a commissioner on a temporary basis, although the state Senate and House of Delegates must elect a judge to a six-year term.

Jagdmann, who also served as Virginia’s deputy attorney general for civil litigation and is a graduate of the University of Virginia and the University of Richmond School of Law, is four years into her third term.

GOP gubernatorial candidate says chamber made defamatory statements about her 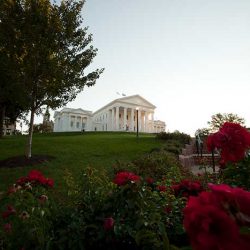