Running from police, an unremarkable bad guy with sandy hair suddenly grabs a little girl and dangles the young hostage from the third floor of a mall atrium.

As a gaggle of nonplused bad guys decked out in ’80s pastels and John Oates mustaches look on, the skylight above
shatters. It’s Wonder Woman, swooping into the scene on her golden Lasso of Truth! She saves the girl and makes quick work of the baddies, notably throwing one through a giant gimmick marching drum emblazoned with the “Virginia is for Lovers” logo.

The scene, filmed at Alexandria’s defunct Landmark Mall in 2018, is from “Wonder Woman 1984,” a December 2020 superhero movie that re-creates the era of Jazzercize, Members Only jackets and side ponytails. Though CGI can accomplish most anything these days, the filmmakers behind this feminist slugfest were pleased to make use of the Landmark, which was built in 1965 and operational until 2017.

The sad reality, though, is that not all malls can be repurposed as movie sets. Even before the pandemic hit and online shopping exploded, the so-called “retail apocalypse” caused by the prominence of Amazon.com Inc. and other online merchants had caused many retailers to go the way of Waldenbooks.

However, developers are beginning to see opportunities in aging shopping mall properties, either in redeveloping the spaces as multiuse projects combining residential, office, entertainment and dining or converting them into something else entirely. Across Virginia, mall properties are being redeveloped to include apartments, sports venues, a medical campus, a casino, and, just maybe, a massive entertainment arena.

Robert Gibbs, a Michigan-based urban planner who specializes in repurposing mall properties, paints a bleak portrait of the future for brick-and-mortar retail. Citing reports from Credit Suisse and others, he predicts 50% to 60% of the nation’s current stock of regional malls will be shuttered by 2026. Larger strip malls with big box anchors will go away even faster. Strip malls anchored by grocery stores? Their numbers will be cut in half as more people move online to buy groceries, forecasts Gibbs, who specializes in repurposing mall properties as an urban planner and managing principal of the Gibbs Planning Group.

Still, Gibbs says there’s hope in property renewal. Malls are generally set on large plots of contiguous land that are well-connected to highways and other popular thoroughfares.

“There is a lot of money to be made in repurposing these malls, and it’s starting to be known,” says Gibbs, who worked during the ’80s as director of planning for Michigan-based Taubman Co., one of the largest mall owners in the country.

Some properties, like the shuttered Bristol Mall, are being redeveloped into entertainment venues.

In November, voters in Bristol, Virginia, approved a plan to build a $400 million casino at the former mall. The Hard Rock Hotel & Casino Bristol is expected to create about 2,000 jobs and generate $130 million in revenue and $35 million in taxes annually.

“The Bristol Mall for many years was kind of the heartbeat of the community. Like a lot of malls, unfortunately, it faced an economic decline and ultimately had to close,” says Andy Poarch, chief operating officer of Richmond-based Alliance Group, a lobbying and public relations firm. While extensive interior remodeling will take place, Poarch says, the plan is to retool the mall into the casino. “The bones of the mall are going to be left intact.”

Local investors Jim McGlothlin and Clyde Stacy hope to open the Hard Rock Bristol casino resort by the end of 2022.

Rob Hargett, a principal and co-founder of Richmond-based development group The Rebkee Co., is at the center of two major mall redevelopments underway in Henrico County that aim to replace former retail properties with sports and entertainment amenities.

Regency Square, which opened in 1975 as Central Virginia’s premier indoor mall, is undergoing a conversion to a mixed-use development. Rebkee is reducing Regency’s retail footprint and adding restaurants, apartments, offices and entertainment venues. New shops and restaurants have been added since Rebkee and Thalhimer Realty Partners purchased Regency Square in February 2017 for $13.1 million, and more additions are in the works, including a swimming facility and a trampoline park. Already, Hargett says, Rebkee and Thalhimer have invested $125 million in the project, including purchasing the mall’s former JCPenney store for $3.1 million last year.

“It could easily be another $125 to $150 [million] in the next three years,” Hargett says, adding that some of the lessons he’s learned with Regency Square are helping him with the redevelopment of Virginia Center Commons, a sprawling indoor mall that opened in 1991 in Henrico near the border with Hanover County.

Where the Regency project is an adaptive reuse, Virginia Center Commons’ redevelopment is more of a teardown, Hargett says.

All new development at Virginia Center Commons will take place over the mall’s existing footprint. That includes the Henrico County Sports & Event Center, a 4,500-seat facility that can be used for events such as sports competitions, small concerts or church services. The Virginia Center Commons redevelopment will likely be completed in the next three or four years and also will include a hotel built by Chester-based Shamin Hotels.

In Norfolk, the city government is seeking bids to redevelop Military Circle Mall — which entered foreclosure and lost its anchor tenants in 2015 — into a walkable, live-work-play development. The city government purchased the mall property and the adjacent former DoubleTree Hotel tower last June for $13.4 million.

Among those pitching to redevelop the property are Grammy-winning musician and Virginia Beach native Pharrell Williams and Virginia Beach developer Bruce Thompson. Three of the four groups competing to take on the 73-acre project are companies specializing in designing or operating major arenas, and their plans include large-scale sporting and entertainment venues.

Jared Chalk, Norfolk’s director of economic development and executive director of the Norfolk Economic Development Authority, says that while an arena wasn’t required in the redevelopment pitches, “Virginia and Hampton Roads specifically lacks a world-class arena, and Military Circle is a super-regional location,” noting that it sits near the interchange of Interstates 64 and 264. “The center of the region is where Military Circle is.”

Military Circle proposals are due to the city by May 14, and the city will likely select a redevelopment proposal before this summer.

Additionally, the city is already beginning to envision the future of the struggling MacArthur Center downtown mall. Norfolk has laid out three possibilities for redeveloping the 22-year-old, 140-store mall to ensure its future viability; options include complete demolition, converting part of the property into office space and creating a pedestrian-friendly promenade with mixed-use buildings.

Though Alexandria’s Landmark Mall recently cosplayed as its younger self for “Wonder Woman 1984,” its future will take place behind a stethoscope.

Local real estate development firm Foulger-Pratt is partnering with Texas-based real estate management company The Howard Hughes Corp. and New York- based Seritage Growth Properties to redevelop the 52-acre site into a 4-million-square-foot, mixed-use walkable community anchored by a $1 billion replacement for the outdated Inova Alexandria Hospital. Brigg Bunker, chief operating officer and managing partner at Foulger-Pratt, says the development will bring a critical mass of people to the area and likely offer a mix of residential offerings, including townhomes, apartments and senior assisted and independent living. The development will feature ground-level retail, as well as public spaces and parks.

“[We] hope that people will just come to the public spaces and enjoy them, whether they’re shopping or not,” Bunker says.

Demolition and infrastructure work on the property will begin in 2023, with portions of the site set to open in 2025.

In a more straightforward approach to redeveloping large retail properties, developer Rob Chesson of Richmond-based The Manakin Cos. LLC is looking to “scrape” the closed Staunton Mall in Augusta County and start over from scratch.

Chesson purchased Staunton Mall in late 2020 for $3.2 million. He says that JCPenney’s recent bankruptcy declaration couldn’t have come at a better time. Often, one of the major hurdles for redeveloping a mall is that struggling anchor stores own their buildings and have contracts with the mall, making their properties difficult to repurpose.

Even though the Staunton Mall had been depressed for a decade, with retail vacancies piling up, the mall’s prior owner couldn’t close it down because of JCPenney’s contractual requirements. Just in utilities, keeping the mall open was costing $900,000 annually.

While there was some public blowback from the mall’s remaining tenants about Chesson’s decision to close the mall in January, he says 85% of tenants were on month-to-month leases, and the remaining leases were set to expire at the end of 2020. Some tenants were paying as little as 20 cents per square foot when most malls cost $2.50 a foot to operate, he added.

“Frankly, this mall had kind of become a shantytown,” says Chesson, whose company specializes in purchasing vacant buildings and distressed assets and making them profitable once again. “You really needed JCPenney to go into bankruptcy in order to close the mall.”

Demolition of the Staunton Mall is slated to be finished in July. The property, Chesson says, is “30 acres of dirt with great visibility and access to the interstate.” He plans to replace the mall with a mixed-use development combining retail, flex space and multifamily with retail outparcels.

“They find them boring, and they prefer to shop somewhere they can have an experience,” he says. “There’s a real desire to shop and to dine around other people, [but] shopping is secondary to the experience.”

Click Here For A Larger PDF of the Commercial Real Estate Firms. 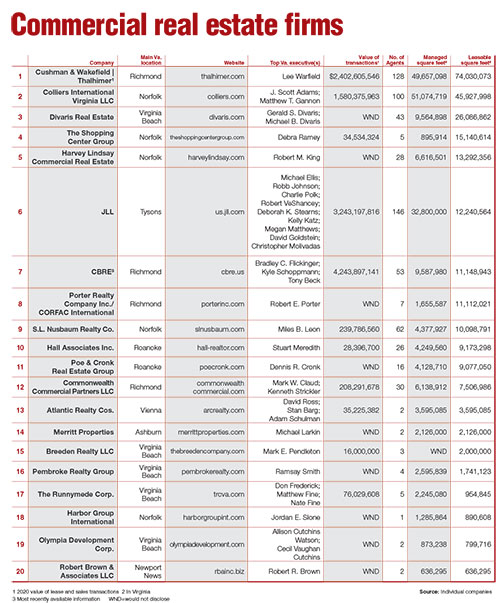 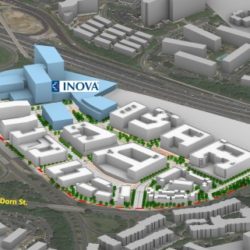 The building is currently leased to American Family Fitness. 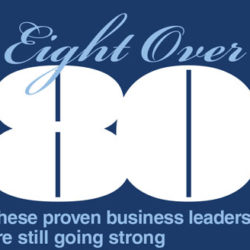