Salamander Resort & Spa in Middleburg has received a Five-Star rating from Forbes Travel Guide, a recognition placing it among elite hotels and resorts around the world.

The 168-room resort, owned by Black Entertainment Television co-founder Sheila Johnson, is one of only two new properties in the U.S. to receive the travel guide’s top rating this year. The other is  Four Seasons Resort Lanai in Hawaii.

Begun in 1958, the Forbes ratings are based on anonymous inspections.  Only 79 properties in the U.S. and 210 worldwide have achieved the Five-Star rating.

Johnson is the only African-American woman to wholly own a Five-Star resort. In addition to owning Salamander Resort & Spa, she is also a partner in Monumental Sports & Entertainment, which owns the Washington Wizards, Mystics and Stanley Cup Champion Capitals.

Opened in 2013, Johnson’s resort is located on 340 acres in Middleburg. The site includes Harrimans Virginia Piedmont Grill, a cooking studio and culinary garden, a tree-top zip line tour and a 22-stall equestrian center with a riding arena. 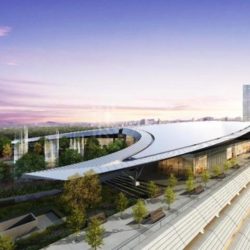