Rudee Loop getting a fresh makeover

In August, the city released four proposals that could turn the 11-acre site from what Vice Mayor Rosemary Wilson described as a concrete-strewn “mess” into a multiuse destination for surfers, anglers and other tourists. Sitting at the southernmost portion of the city’s Oceanfront area, the land would become home to green space and a parking garage in each of the proposals, while still catering to fishing and surfing enthusiasts.

The competing development proposals come from some familiar names.

A Pro Football Hall of Fame inductee who played for the Buffalo Bills and the former Washington Redskins, Smith says his idea builds on other projects — including the nearby $350 million Atlantic Park surf park, set to start construction this fall.

A second proposal from Virginia Beach-based Gold Key | PHR, known for its Oceanfront Cavalier Resort, has pitched a 7-acre park, 177 units of multifamily housing and 5,600 square feet of commercial and retail space. It could also add a boutique hotel with about 250 rooms. Gold Key | PHR CEO Bruce Thompson says the Oceanfront’s core is better suited for density than Rudee Loop. “The thing that was missing was really a unique and large community space, [which] residents and tourists could all enjoy,” he says.

A third proposal from the nonprofit Virginia Gentlemen Foundation, which developed a special needs playground at Rudee Loop, would include a skate park, a stage, a surf museum and nonprofit concession space.  The organization has partnered with international design firm EDSA and Gold Key | PHR, which would handle construction.

Finally, the city’s own parks and recreation department has proposed developing the site with a skate park, fishing pier, stage, playgrounds and food truck plaza.

The city will spend the next couple months soliciting public input on the proposals, says Linwood Branch, the city councilmember representing the Lynnhaven area. “This is a major decision.” 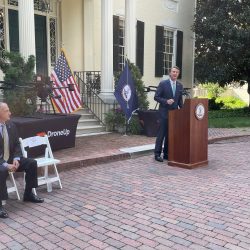