RICHMOND – Contested federal permits and a large environmental impact are putting the “Commonwealth Connector,” a new 55-mile alternative to Route 460 from Prince George Co. to Suffolk, in jeopardy.


Gov. Terry McAuliffe told the Virginian-Pilot in December he did not believe taxpayer money should be used on the project until federal permits were issued and—even then—he would still “take a hard look” at the project.


“The project does not include improvements to the existing U.S. Route 460 or other adjacent roadways,” the Commonwealth Connector website states.


The proposed route will cost around $1.4 billion.  According to the U.S. Department of Transportation’s Federal Highway Administration’s website, the project will be funded from three different sources.  The Virginia Department of Transportation would provide about $900 million and the Virginia Port Authority would provide about $250 million of public funding, both of which would ultimately come from taxpayers.


The rest — around $250 million — would be provided through tax-exempt toll revenue bonds, which will be paid back with tolls collected from highway users.


Drivers who travel the length of the new alternative would be charged around $4 while trucks would pay around $12.  The existing Route 460 would remain free.


Supporters of the road project say they believe the highway will help the local economy.  Delegate Rick Morris, R-Carrollton, says the route is needed to bolster economic development because the highway will provide additional ways for goods to get to market from the port.


“It’s great and needed for economic development not only for East and Southeast Virginia, but our entire Commonwealth,” Morris said.


In a 2013 briefing presented to the Suffolk City Council by Virginia Department of Transportation project manager Philip Rinehart, VDOT said the construction of the highway would create approximately 4,000 jobs in the area.  VDOT also estimated, because of new economic development, the connector would create more than 14,000 long-term jobs.


In addition to helping the economy, Morris says he thinks the route is needed for public safety reasons as the current route can be dangerous in severe weather situations.


“In any type of hurricane or inclement weather, the current route gets flooded and gets backed up for miles and miles,” Morris said.


The Southern Environmental Law Center (SELC) based in Charlottesville says the project would be detrimental to the surrounding environment.  The project could impact at least 470 wetland acres and up to 3,000 farm acres.  The organization has spoken to McAuliffe about the project.


According to Trip Pollard, senior attorney and leader of the SELC’s Land and Community Program, the project is not worth the cost to taxpayers.


“There are far better uses for the money earmarked for a new Route 460,” Pollard stated in an email, “including improving the existing Route 460, improving rail in the 460 corridor, reducing the tolls on the Downtown/Midtown Tunnel and improving I-64.”


Pollard stated he also thinks there are other ways public safety can be improved in the area that do not involve building this new road.  Instead of creating the new route, Pollard says the area can be efficiently evacuated when necessary by reversing eastbound lanes on the existing, improved versions of Routes 58 and 460.


“It is the bottlenecks on the local roads leading to these highways that are the true impediment to effective evacuation from this region,” Pollard stated, “not the existing Route 460.” 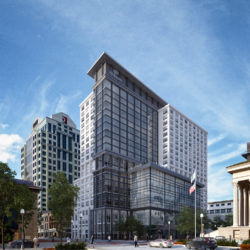 Work gets underway on Norfolk’s new hotel and convention center

Construction begins on Radford’s College of Humanities and Behavioral Sciences