Once a big economic development is announced, it can be years before it comes to fruition. But that wasn’t the case with Mack Trucks Inc., one of North America’s largest producers of heavy-duty trucks, which took only nine months from announcement to starting full production of medium-duty trucks in the Roanoke Valley.

In January 2020, the North Carolina-based truck-maker owned by Volvo Group announced it would invest $13 million and hire 250 people to produce the new line of medium-duty trucks in Roanoke County.

Full production at its Roanoke Valley Operations started last September, a couple months later than anticipated but way ahead of most economic development projects.

“The Mack Trucks project motored along,” says Beth Doughty, the recently retired executive director of the Roanoke Regional Partnership, which helped secure the deal. “The company had a flurry of hiring and is well on its way to getting to 250 employees.”

By the end of 2020, Mack Trucks had hired 245 employees at the Roanoke Valley Operations facility in Salem and expected to have 250 employees by the end of February, says company spokeswoman Kimberly Pupillo. The average annual wage at the plant is $42,400.

Aside from creating jobs for the region, Mack’s new plant also represents a return to building medium-duty trucks for the first time since 2002. The projected overall impact is $364 million a year at full production, which includes the creation of 600 spinoff jobs in the community. Roanoke’s Metalsa Structural Products Inc. is providing frame rails, and other local businesses are supplying smaller parts.

“Any project like this would have a substantial economic impact,” Doughty says. “We have a very strong transportation-related manufacturing sector — 25 firms in the cluster is now 26. The addition of Mack Trucks makes us stronger to attract even more projects.”

Mack executives zeroed in on Roanoke County for its medium-truck operations because of its location along the Interstate 81 corridor and proximity to suppliers and other affiliates. The plant is about 45 miles from sister company Volvo Trucks North America’s factory in Dublin, which makes heavy-duty trucks.

The accelerated timeline at the Roanoke Valley plant was due in part to Mack’s decision to retrofit an existing facility, the former LSC Communications book plant, which closed in 2017. Mack’s $13 million investment was used for equipment, tooling and enhancements at the 280,000-square-foot facility.

The plant is producing the Mack MD6 model, with a gross vehicle weight rating of 25,995 pounds, and the MD7, which can carry a total 33,000 pounds. The MD6 also does not require a commercial driver’s license to operate non-hazardous payloads. The new trucks can be used for different applications, such as refrigerated vans or flatbed trucks that carry items that don’t fit into cargo boxes.

“Demand for the MD series has met and even surpassed our expectations,” Pupillo says. The company does not disclose production numbers or pricing, but according to trade publications, all medium-duty truck sales were beginning to show signs of improvement by last September after suffering at the start of the pandemic.

COVID-19 delayed the start of production at Mack’s plant by two months, and the company instituted safety measures, Pupillo says, such as requiring masks.

To secure the deal, Roanoke County offered the company $700,000 in incentives, matching a grant from the state’s development opportunity fund. The Virginia Jobs Investment Program is providing employee training at no charge.

Volvo Group has also been busy, with an announcement in December 2020 that its Pulaski County plant would start manufacturing the new battery-powered, heavy-duty VNR Electric truck model this year. It is expected to enter the North American market later in 2021. It runs on battery electric power and produces no tailpipe emissions, according to the company.

The Dublin facility, Volvo’s largest truck plant in the world, currently employs about 3,000 people and builds heavy-duty trucks of several models. The plant has cyclical layoffs as the long-haul truck market fluctuates, but Mack’s plant is expected to be a bit more steady because of a more consistent history.

“Every industry is cyclical,” Doughty says. “The transportation-related manufacturing sector has been in this region for decades. It is a long-term growth industry.” 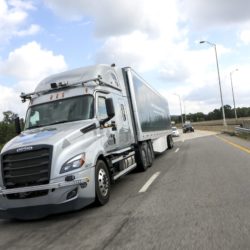