Rocket Lab USA Inc. has selected Wallops Island as the location for its launch site and a new manufacturing and assembly complex for its new Neutron rocket, Gov. Glenn Youngkin announced Monday.

The move is expected to create as many as 250 jobs.

Rocket Lab will launch Neutron from a new launch pad owned by the Virginia Commercial Space Authority that will be located within the NASA Wallops Flight Facility and Mid-Atlantic Regional Spaceport on the Eastern Shore. The 250,000-square-foot complex will be built on 28 acres next to the flight facility, which was purchased by the flight authority in 2021. It will be located near Rocket Lab’s Launch Complex 2, the company’s first launch site in the United States, which was built for its Electron rocket.

“Virginia’s industrial and innovation ecosystem and skilled workforce make the commonwealth an optimal location for industry leaders like Rocket Lab,” Youngkin said in a news release announcing the selection. “This important project reinforces the Eastern Shore’s legacy as an aerospace hub that offers the infrastructure for manufacturing and developing new technologies, and we look forward to a long partnership with Rocket Lab.”

Rocket Lab revealed details about Neutron in December 2021. The reusable rocket is designed to lift 8-tons of payload and expected to provide launch capabilities for satellite mega-constellations, deep space missions and human spaceflight, according to the company’s website. Neutron is expected to be operational in late 2024.

“Neutron is a new generation of rocket that will advance the way space is accessed, and Virginia makes perfect sense as Neutron’s home base,” Rocket Lab founder and CEO Peter Beck said, adding that the state is one of four that have a Federal Aviation Administration spaceport license for missions to Earth orbit or on interplanetary trajectories.

Rocket Lab will begin construction promptly. The company recently landed a $24 million development contract from U.S. Space Force’s Systems Command in support of Neutron’s capability to aid national security and defense missions, according to the company.

“(Virginia’s) position on the Eastern Seaboard is the ideal location to support both Neutron’s frequent launch cadence and the rocket’s return-to-Earth capability of landing back at its launch site after lift-off,” he said.

Beck said the company will also be able to draw on the state’s experienced aerospace workforce, which is expected to grow 8.5% during the next decade, said Secretary of Commerce and Trade Caren Merrick.

Founded in 2006 and headquartered in Long Beach, California, Rocket Lab delivers launch services, spacecraft components, satellites, other spacecraft and management solutions to make space access faster, easier and cheaper. The company also designed and manufactures the Electron small orbital launch vehicle and the Photon satellite platform. Since its first orbital launch in January 2018, the Electron has delivered 109 satellites to orbit for private and public sector organizations for national security, scientific research, space debris mitigation, Earth observation, climate monitoring, and communications operations. It is the second-most frequently launched U.S. rocket annually since 2019, according to the release.

Its Photon platform has been selected to support NASA missions to the moon, Mars and the first private commercial mission to Venus, according to the company.

The Virginia Economic Development Partnership worked with Accomack County, the Virginia Commercial Space Flight Authority (Virginia Space), and the General Assembly’s Major Employment and Investment (MEI) Project Approval Commission to close the deal. The state will support the project with $30 million appropriated to Virginia Space for infrastructure and operational systems, subject to legislative approval. The MEI commission also approved up to $15 million to support site improvements and construction of a building to be owned by Virginia Space and leased to Rocket Lab. 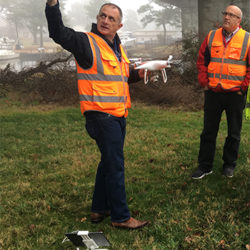 An aerial view of drone industry during COVID-19

CEO of DroneUp in Virginia Beach discusses how technology is being used during crisis.