The mission, “Virginia is for Launch Lovers,” lifted off around 6 p.m. EST from the company’s Launch Complex 2 at Virginia Space’s Mid-Atlantic Regional Spaceport within the NASA facility, sending its 60-foot-tall Electron rocket into space, where it successfully deployed three satellites into low Earth orbit for Herndon-based satellite analytics company HawkEye 360.

About 90 seconds after lift off, Electron’s nine Rutherford engines were propelling the rocket at speeds of about 3,000 kilometers per hour, or more than 1,800 miles per hour, according to video of the launch.

The Electron rocket launch from Virginia supplements Rocket Lab’s New Zealand-based Launch Complex 1 from which 31 Electron missions have previously taken off. Combined, the two pads can support more than 130 launch opportunities every year, Rocket Lab said in a news release. Launch Complex 2, which was built for Electron, is expected to support up to 12 missions annually.

“We’re immensely proud to have delivered mission success for HawkEye 360,” Rocket Lab founder and CEO Peter Beck said in a statement. “With Launch Complex 2, we set out to create a new path to orbit from U.S. soil after more than 30 Electron launches from New Zealand, and what could be more fitting for the first Virginia mission than launching a Virginia-built satellite? We couldn’t ask for better mission partners in HawkEye 360 and Virginia Space, and we look forward to many more missions together.”

The mission is the first of three planned with HawkEye 360 through 2024 as the company seeks to boost its ability to collect radio frequency data across the globe and expands its constellation to 18 satellites. HawkEye opened a new, 19,000-square-foot facility in Herndon in July to boost production of its satellites.

“We are happy to report that our Cluster 6 next-generation satellites have reached orbit and we look forward to ramping up operations in the weeks ahead and fully integrating them into our constellation,” HawkEye 360 CEO John Serafini said in a statement. “We are grateful for our valued mission partners, Rocket Lab and the Virginia Commercial Space Flight Authority, who worked alongside our fantastic HawkEye 360 team to make this inaugural Virginia launch a success.”

Rocket Lab initially announced in November 2022 that it had established a 13-day launch window in December 2022. That was set following progress by NASA in certifying its Autonomous Flight Termination Unit software, which is required to enable Electron launches from Virginia. The NASA Wallops Flight Facility blamed unfavorable weather conditions and range/airspace availability for delays on its social media.

Electron’s first U.S. launch brings even more visibility to Virginia’s Eastern Shore as well as to the state’s space industry. Rocket Lab announced in February 2022 that it had selected Wallops Island as the location for its launch site and a new manufacturing and assembly complex for its new, reusable Neutron rocket, a move that is expected to bring 250 jobs.

“We are honored to support the launch of this historic mission,” Ted Mercer, CEO and executive director of the Virginia Commercial Space Flight Authority, known as Virginia Space, said in a statement. Virginia Space owns and operates the Mid-Atlantic Regional Spaceport at Wallops. “In addition to being Rocket Lab’s first and only U.S. launch location, we will also be building rockets and processing their payload right here in Accomack County — something that has never been done in Virginia. Our partnership with Rocket Lab is a unique opportunity for the commonwealth of Virginia to create long-term economic development opportunities in the form of high-paying jobs, launch viewing tourism, and construction of new facilities on the Eastern Shore.” 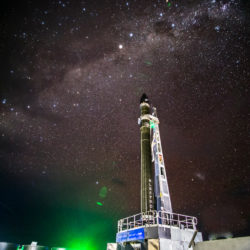