Rocket Lab USA Inc. will launch the first U.S. mission for its Electron rocket from a launch pad on NASA’s Wallops Flight Facility in Accomack County during a 13-day window that opens Dec. 7.

The company announced the Wallops launch Thursday. The mission, called “Virginia is for Launch Lovers,” will deploy satellites for Herndon-based HawkEye 360 and will be Rocket Lab’s first liftoff from the company’s Launch Complex 2 at Virginia Space’s Mid-Atlantic Regional Spaceport within the NASA facility. The launch pad was built for the company’s Electron rocket and is the company’s first launch site in the United States.

California-based Rocket Lab announced in February that it selected Wallops Island as the location for its launch site and a new manufacturing and assembly complex for its new Neutron rocket. The Electron rocket launch from Virginia will supplement its Launch Complex 1 in New Zealand, from which 31 Electron missions have previously taken off. Combined, the two pads can support more than 130 launch opportunities every year, Rocket Lab said in a news release.

The Electron is a small, two-stage, partially recoverable orbital launch rocket that stands about 60 feet high and measures about four feet in diameter. Rocket Lab has flown 32 Electron missions, including three failed missions, since the first Electron flight in 2017.

The December launch window has been set following progress by NASA in certifying its Autonomous Flight Termination Unit software, which is required to enable Electron launches from Virginia.

“We are honored and excited to bring a new launch capability to Virginia’s Eastern Shore,” Rocket Lab founder and CEO Peter Beck said in a statement. “Electron is well established as the leader in small launch, reliably serving the responsive space needs of the commercial, civil, DoD (Department of Defense), and national security markets alike. With our inaugural mission from Launch Complex 2, we are immensely proud to expand on this strong launch heritage by enabling a new capability for the nation from Virginian soil. We look forward to making history this December with our dedicated mission partners HawkEye 360, NASA and Virginia Space.”

The Electron launch in December is the first of three it will undertake for HawkEye 360 in a contact to deliver 15 satellites to low Earth orbit between 2022 and 2024. Rocket Lab will also provide HawkEye 360 with separation systems produced by Planetary Systems Corporation, a Maryland-based space hardware company acquired by Rocket Lab in December 2021.

“We’re proud to be a Virginia-based company, with Virginia-developed technology, launching out of the Virginia spaceport,” HawkEye 360 CEO John Serafini said in a statement. “We selected Rocket Lab because of the flexibility it enables for us to place the satellites into an orbit tailored to benefit our customers. Deploying our satellites on Rocket Lab’s inaugural launch is a giant leap in Virginia’s flourishing space economy.”

HawkEye opened a new, 19,000-square-foot facility in Herndon in July to boost production of its satellites.

With the December launch of the satellites, its sixth cluster of three, HawkEye will have placed 15 next-generation satellites into orbit within two years. A seventh cluster is anticipated to launch in February, followed by clusters 8 and 9 mid-2023. Once its latest cluster is commissioned, HawkEye will be able to collect radio frequency data as frequently as every hour anywhere in the world, the company said in a news release.

NASA’s Wallops visitor center will be open for the launch.  A live webcast will also be available at www.rocketlabusa.com/live-stream from around T-40 minutes. 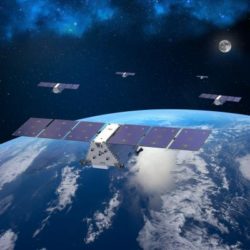