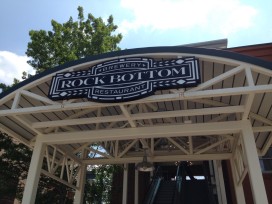 The 8,500-square-foot restaurant, which expects to create 120 jobs, is located in the food court on the town center’s second floor.

Rock Bottom will offer 10 fresh, locally brewed in-house craft beers along with a selection of starters, house favorites, burgers and pizzas. Entrees will range in price from $13.50 to  $22.95.

Rock Bottom, which got its start in Denver and whose parent company, CraftWorks, is based out of Chattanooga, Tenn. and Broomfield, Colo., operates in 17 states.

“We’re excited to become part of the Short Pump community,” Dale Nelson, who will be the restaurant’s general manger, said in a statement. “This is a first for the area to offer onsite craft brewing …”

Nelson has managed other CraftWork entities including Rock Bottom Charlotte, where he  previously was general manager before moving to Richmond.

Several events are planned during the first opening weeks to showcase the restaurant’s menu and craft beers, including five training events where proceeds from alcohol sales will go to support FeedMore’s Central Virginia Food Bank and Meals on Wheels.

Head brew master Becky Hammond will brew the craft beers at the new restaurant. Beers from some of Richmond’s local breweries as well as national brands also will be offered. Hammond is a marine biology major from Clemson University, who previously worked as a brew assistant in Nashville with Brad Mortensen who got his start at Legend Brewery in Richmond.