“The Logans have contributed much to Carilion and to our community’s success over the years,” Ralph Alee, Carilion’s vice president for philanthropy, said in a statement released Monday. “Through this generous gift, they will continue to shape the future of our region for decades to come.”

Carilion’s plans to expand its cancer services include a new cancer center to consolidate personalized care, advanced treatment options and research in one location. The center, which will be built next to Virginia Tech’s Health Sciences and Technology campus, is expected to cost more than $150 million.

A Salem native, George Logan founded and served as a director of Roanoke-based Valley Financial Corp., now a Pinnacle Financial Services subsidiary. He also served on Roanoke Electric Steel Corp.’s board before Steel Dynamics acquired the company in 2006. Logan returned to the region in 2018, after 20 years serving on the faculty of the University of Virginia’s Darden School of Business.

His connection to Carilion started before Carilion Clinic’s formation. Logan served on Carilion Clinic’s board of directors from 2003 to 2007, after serving 10 years on the board that oversees Carilion’s Roanoke operations. He’d previously served on the board of Community Hospital of Roanoke Valley. Logan helped lead the organizations through the merger of Roanoke Memorial with Community Hospital and Carilion’s transition to Carilion Clinic, which included its partnership with Virginia Tech to open a medical school and research institute.

“There is a lot of vision at Carilion. I’ve seen firsthand how much our health system benefits the region, and I want to support its continued growth,” Logan said in a statement.

Harmon Logan is a music therapist and a Celtic harpist who volunteered at Carilion’s Cancer Center for more than 20 years. She has also volunteered at U.Va. and Sentara Martha Jefferson Hospital in Charlottesville.

Carilion Clinic is a nonprofit health system that has more than 13,500 employees and treats about 1 million people in Virginia and West Virginia. 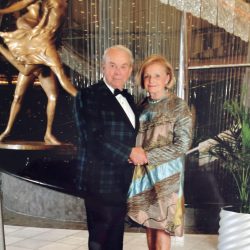