Michael C. Maxey, the 11th president of Roanoke College, announced Thursday that he will retire at the end of the academic year.

Maxey has been with Roanoke College, located in Salem, since 1985 and has served as president since 2007. He has served the longest of any of the college’s presidents, according to a news release.

“The decision has been most difficult, but it is right for Terri [Maxey] and me, and for Roanoke College,” Maxey said in a statement. “I am convinced that the close of this academic year is an optimal moment to retire. … I will always treasure the opportunity to have served Roanoke College as president.”

The board of trustees will immediately name a search committee to identify Maxey’s successor. The college will work to hire his replacement by July 31, 2022.

“We thank President Maxey for his unmatched commitment and excellent leadership, which will continue throughout this academic year,” Malon Courts, chairman of the Roanoke College Board of Trustees, said in a statement. “We have immeasurable gratitude for his service. In large part due to President Maxey, Roanoke College is on firm footing and is an excellent academic institution; a place where students can thrive and find high-value careers and lives with meaning and purpose.”

Along with other contributions to the college, Maxey spearheaded the Roanoke Rising campaign, which raised $204,047,431, making it the largest campaign in the college’s history, according to a news release. The college also hired its first vice president for community, diversity and inclusion, created the Diversity and Inclusion Steering Committee and established the Center for Studying Structures of Race during his tenure.

Maxey held instructional bow-tie sessions for interested students prior to the annual President’s Ball, one of which was attended by more than 40 students.

Maxey holds a bachelor of arts in history and a master’s degree in counselor education from Wake Forest University. He has a certificate of advanced graduate study from the University of New Hampshire and attended the Harvard Graduate School of Education’s Institute for Educational Management. Additionally, the Columbia, South Carolina-based Lutheran Theological Southern Seminary gave Maxey an honorary doctor of divinity degree. 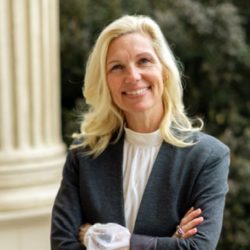