Even the Federal Reserve hiking interest rates likely won’t be enough to cool down the hot real estate market in Virginia, experts say.

In an attempt to slow the highest inflation rates in 40 years, Fed officials voted on March 16 to raise the benchmark federal funds rate by a quarter percentage point to a range between 0.25% and 0.5%, the first rate increase since 2018, according to The Wall Street Journal. It’s expected to rise to about 2% by the end of the year, slightly higher than before the pandemic. In March 2020, the Fed slashed rates to nearly zero to boost the economy amid pandemic shutdowns.

“The increase in the federal funds rate was well telegraphed by the Federal Reserve, so no one was surprised,” said Virginia Realtors Chief Economist Lisa Sturtevant. “And so to that extent, we know that when the Fed raises the short-term borrowing rate, it ultimately then works into all types of rates, including mortgage rates, but the things is, this rate [hike] was anticipated and to a large extent, it’s already been baked into current mortgage rates.”

Rates ticked up March 17, a sign of what the next few weeks could look like, in terms of volatility in mortgage rates, she noted. Last year, rates were not expected to rise much past 4% but this year it could be closer to 5% by the end of 2022.

“I think all this is to say that rising mortgage rates, along with challenges with rising affordability issues, means that we’re likely to see a little bit of a cooldown in demand in the housing market,” Sturtevant said.

That’s not necessarily a bad thing, she pointed out, as it would “take a little bit of the frenzy out of the market [and] allow the market to return to a little bit more normal conditions.”

But that doesn’t mean the market will have a correction.

“The underlying fundamentals remain pretty strong in terms of the demographics … [and] the economy in Virginia is sort of chugging along pretty well. So I think we’ll see a slowdown in demand as a result of higher mortgage rates, but more of a softer sort of demand, rather than any sort bottom-falling-out market,” Sturtevant said.

Virginia Mortgage Banking Association President Kevin Darcey and Ryan McLaughlin, CEO of the Northern Virginia Association of Realtors, both look at the rate hike from a historical perspective.

“Where rates are right now is going to be in a very similar spot ratewise where we were back in 2018, when the average was roughly 4.54%,” Darcey said about mortgage rates. “That’s probably where we’re going to end up — somewhere in that range.”

January’s median home sales price was $337,500, according to Virginia Realtors. Each half-point increase in rate will change the monthly mortgage payment by about $100, Darcey said.

“I think we’re going to find that in certain markets, that may not have a large impact, but for some, such as first-time homebuyers, there’s going to be an affordability issue, or it will eliminate some buyers from being able to purchase a home, so it’s definitely a concern,” Darcey said.

The combination of homes being sold over list price and an increase in rates will result in a little bit of a slowdown, he said.

McLaughlin noted the historical context is important when looking at rates going up. In the 1980s, the home lending rate climbed as high as 22%.

“We’re expecting by the end of the year, mortgage rates should be around 4.3%,” he said. “While that’s up, in the big picture, long-term rates are still very competitive when it comes to buying a home.”

The bigger problem, however, is the shortage of inventory.

At the end of January, there were around 12,000 active listings in the state, according to Virginia Realtors — about 5,000 fewer than this period in 2021 and decrease of nearly 27%.

There’s slightly more than three-quarters of a month’s supply of homes now, a historic low, according to Jon McAchran, principal broker of AtCoastal Realty and secretary of the Real Estate Information Network (REIN) multiple listing service in Hampton Roads. By contrast, a balanced market will have five to seven months of supply, he said.

He doesn’t think the rising interest rates will ultimately make a big difference.

“When you put a house on the market and get 50 showings and 20 offers in a day or two, that’s the biggest testimonial of the supply and demand metric,” McAchran said. “I personally don’t think things are going to slow down until this supply and demand issue gets more under control.”

He encourages the agents and brokers he works with to stay educated on the market now, and on what it’s been like in the past.

“The key is to be educated with some of the different strategies helping us to work with buyers and sellers and realize that, even though it’s a great market for sellers, [it] doesn’t mean you’ll get multiple offers,” he said.

Copeland thinks it will take a couple of rate hikes before there’s a significant impact on the Northern Virginia real estate market.

The Fed has six more rate hikes planned before the end of 2022.

“There’s so many buyers in the market, I don’t see it causing buyers to back out,” Copeland said, but he encourages buyers to be ready to close within two or three weeks.

“I think everybody knew the change was coming. The big thing [is] we have to live in the moment and buy or sell based on what’s happening in the market, not what’s going to happen in six months or a year. It’s unpredictable. No one knows.” 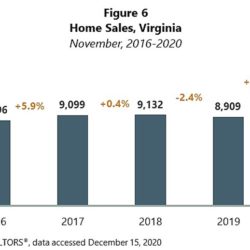