An evaluation panel will assess the five entries and pare them down to a short list this winter, according to the announcement.

The development teams include:

In November, the two Richmond authorities issued a request for interest to redevelop City Center, with a submission deadline Tuesday to be considered for the project’s first phase. According to the city’s 242-page request for interest (RFI), the plan must include demolition of the Coliseum, which has been closed since 2019, and development of a hotel with at least 500 rooms and meeting space. The City Center Innovation District Small Area Plan suggests adding public green spaces on part of the Coliseum footprint, with a main plaza at the intersection of North 6th and East Clay streets that could “serve as a citywide convening space” for concerts, festivals and ice skating when weather permits. Smaller spaces could be used for outdoor dining, playgrounds or other uses, according to the small area plan, which was released in November 2021.

Capstone Development is part of the RVA Diamond Partners team, which is the joint venture that the city has selected to redevelop the Diamond District, a 67-acre property that includes The Diamond, the Richmond Flying Squirrels’ baseball field.

Sterling Bilder’s Joshua Bilder submitted a $1.4 billion proposal to the city in 2019 to redevelop the City Center area, including a $168 million renovation to the Coliseum, an $8 million hotel in the historic Blues Armory building and a $17.4 million apartment complex. Bilder proposed the plan as an alternative to the NH District Corp.’s $1.5 billion Navy Hill proposal to replace the Coliseum, a plan that eventually was rejected by Richmond City Council in early 2020.

A full list of companies and investors making up the development teams vying for the City Center project — including City Center Gateway Partners and RCDP — was not included in Wednesday’s announcement. In late November, the two city authorities hosted an in-person site visit attended by several architecture firms, developers, builders and others, including Baskervill, Capital Square, Capstone, Hourigan Group and W.M. Jordan Co. 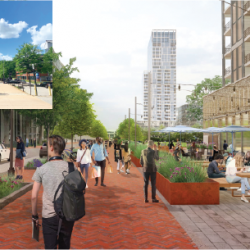