When Lori Collier Waran was a young girl, she spent a lot of time around Richmond Raceway. Her grandparents lived just blocks away and her grandfather would volunteer to park cars so he could watch races. Sometimes Waran tagged along, too.

“The raceway was sort of my playground,” she recalled.

Now, the raceway will be her workplace. On July 11, she’ll become the organization’s fourth president and the first female president in its 76-year history.

“Lori is a proven executive with a track record of connecting with consumers through strategic planning and execution of events at every stop along her decorated career,” said Chip Wile, NASCAR senior vice president and chief track properties officer, in a statement. “Lori has deep roots in the state of Virginia and has a great passion to deliver the best experience possible for fans when they enter the gates at Richmond Raceway. We look forward to an exciting next chapter at Richmond under Lori’s leadership.”

At Virginia Business, which she joined in 2020, Waran oversaw media advertising sales, production, circulation and audience development. Before that, she spent more than a decade as general manager and publisher for Richmond-based Style Weekly, which during her tenure was first owned by Landmark Media Enterprises and later by Tribune Publishing. In addition to her role as Style’s publisher, she was a multimarket media manager for Tribune, overseeing print and digital advertising sales for Style Weekly, the Virginia Gazette in Williamsburg and the Tidewater Review in West Point. She began her advertising sales career in 2003 as an account executive for Landmark-owned Trader Publishing, which produced Auto Trader magazine.

“Lori was a bright star at Virginia Business with a long record of success. We wish her the very best as she departs for this new opportunity,” Virginia Business President and Publisher Bernie Niemeier said in a statement.

Waran is replacing Dennis Bickmeier, who left the raceway in April to head up Henrico County’s new sports and entertainment authority.

Her vision for the 1,100-acre raceway is simple.

“Richmond Raceway is known for its iconic fan experience,” she said. “My overall vision would be to continue that incredible experience for the fans. We want to want to have fans coming back and returning each and every race and each and every year.”

Richmond Raceway is owned by NASCAR. The raceway hosts two NASCAR weekends annually, as well as more than 200 event days a year.

One of the things that excites her about her new position is that it’s in Richmond, which she says is dear to her heart.

“The great thing that I’ve done in my career overall is being able to work with legacy organizations that are really impactful, both in the Richmond community and in the commonwealth of Virginia,” she said. “It’s those companies that mean something to the community. And the same with the raceway … [it] is very impactful to this community and it’s been so for 76 years.”

The common denominator between her current role, in media, and her new one, in sports, she says, is audience development. Both industries aim to retain loyal audience members while trying to engage new ones and grow audience share.

“I want to see Richmond win,” she said. “And the great thing about the Richmond Raceway is that it enables Richmond to be on a national screen in front of millions and millions of viewers a number of times a year, and that’s just so exciting to me. I think that’s the thrill of a lifetime, and the fact that I get to play a bit role in that … that’s really special.” 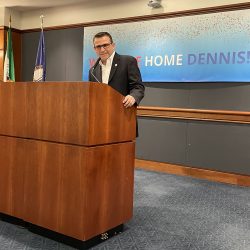 Tony Johnson started his career at the amusement park in 1974