The city of Richmond announced Monday it has selected a joint venture including Richmond-based Thalhimer Realty Partners to build a new baseball stadium for the Richmond Flying Squirrels, as well as a mixed-use development surrounding the stadium, revitalizing the area into a new neighborhood to be known as the Diamond District.

The entire project is expected to cost $2.44 billion, with the first phase costing a minimum capital investment of $627.6 million, according to information provided by the city Tuesday. A Richmond City Council resolution to officially select RVA Diamond Partners LLC, sponsored by the mayor and seven city councilors, is scheduled for a vote Thursday. Because the venture involves the sale of city-owned land, seven out of nine council members must approve the motion.

Other partners in the RVA Diamond Partners joint venture include Washington, D.C.-based Republic Properties Corp., Chicago-based Loop Capital Holdings LLC and San Diego venue developer JMI Sports. According to the city’s announcement, the group committed to purchase the first $20 million of bonds needed to finance the stadium, which is required to be completed and open for the 2025 Minor League Baseball season.

According to Cushman & Wakefield | Thalhimer, the parent company of Thalhimer Realty Partners, the ballpark will have a capacity of 10,000, and the rest of the project will include 935,000 square feet of office space, 195,000 square feet of retail and community space, and two hotels with a total of 330 rooms.

The project also will include 2,800 residential units — both rental and 157 condos for sale — available at different price points, with 20% of rental units priced for households earning between 30% and 60% of the area median income, and 100 apartments under project-based vouchers for public housing residents. Twenty percent of all residences for sale will be priced for households earning between 60% and 70% of area median income, and the developers will put up a $1 million fund to assist home buyers with closing fees and associated costs.

The cost of the baseball stadium and public infrastructure will be financed with Community Development Authority (CDA) bond financing, the city said, which would not require Richmond to repay bonds if there is a shortfall. Bond financing will be repaid with tax revenue generated in the 67-acre development property, including taxes on real estate, businesses, meals, hotel revenue and baseball admissions. Local portions of the state sales tax, lease payments and other revenue will also be part of the deal.

An 11-acre park will also be part of the development, as well as open space and walkable blocks, connecting the Diamond District with the trendy nearby Scott’s Addition neighborhood, southwest from The Diamond across Arthur Ashe Boulevard. According to the city, the developers also wish to partner with the city’s School Board to develop a technical training center at the former Altria site on the city’s South Side, where the ONE Casino & Resort was set to be built.

The replacement of the Arthur Ashe Jr. Athletic Center, a nearly 40-year-old building that contains a 6,000-seat athletic facility and basketball court, will not be part of the first phase of the Diamond District development, but the Richmond City Council is expected to vote on a resolution to prioritize funding for recreational and extracurricular activities for city youth and young adults. The resolution pledges that the city will pursue “recreational and organizational opportunities previously served by the center on sites in the general proximity of the Diamond District prior to the transfer of the parcel” on which the Ashe Center is located and the future demolition of the center, which has been deemed too expensive to repair and maintain.

Virginia Commonwealth University, which will use the new ballpark for off-season sporting events, and the Richmond Flying Squirrels will pay leases to use the stadium, the city has said. VCU plans to build a 40-acre athletic village east of the Diamond District, which could be made available to city residents through a separate use agreement, the city’s legislation says.

The replacement of The Diamond, the 37-year-old home of the Richmond Flying Squirrels AA baseball team, was the chief factor in the project’s timing. Lou DiBella, president and managing general partner of the Squirrels franchise, said Monday night in a statement: “The Richmond Flying Squirrels are proud to be an anchor tenant of this proposed revitalization and development of the Diamond District, a natural extension of the growth of our beloved hometown. The Squirrels will be the most well-known neighbors in a new, diverse and dynamic neighborhood. We commit to being a great neighbor and to making memories together for decades to come.”

In 2020, Minor League Baseball revamped its facilities requirements to include indoor batting cages, coaches’ rooms, locker rooms for female employees and other features that the aging Richmond stadium lacks. A document released last month by the city said, “A new ballpark must be built to keep Minor League Baseball in Richmond beyond the 2024 season.”

The entire multiphase project is expected to be completed in up to 15 years, with the inclusion of housing, hotel and retail space (and possibly office space), in addition to the stadium.

“This proposal meets our goals to equitably revitalize an underdeveloped part of our city and maximize its potential to enhance the quality of life for all Richmonders,” Mayor Levar Stoney said in a statement. “Commitments to affordable housing, minority business engagement, publicly accessible open space and a new ballpark mean that the Diamond District will be enjoyed by, built by and benefit all residents of our city. The Diamond District has long been a diamond in the rough. I look forward to seeing it shine.” 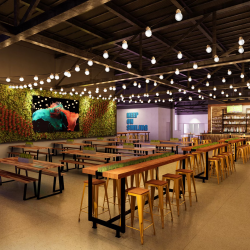