In a media hard-hat tour of the former Sixth Street Marketplace on Wednesday, Richmond officials and the master planner of the proposed $1.5 billion mixed-use Navy Hill project spoke in hopeful terms of a vibrant, active downtown — while standing amid neglected structures that held similar promise decades ago.

The public-private partnership, proposed by a group of corporate heavy hitters led by Dominion Energy CEO Thomas F. Farrell II under the nonprofit NH District Corp., would redevelop 10 blocks of the city into a new neighborhood, Navy Hill. The plan would replace the aging, now-shuttered Richmond Coliseum with a $235 million, 17,500-seat arena, the state's largest entertainment venue. It would also include more than 1 million square feet of commercial and office space, plus 2,500 apartments and a 541-room hotel.

Wednesday’s tour focused on the proposed renovation of the 110-year-old Blues Armory building, which once housed the Richmond Light Infantry Blues military unit and served as a market and dancehall at various points in its history. Its first floor was part of Richmond’s now-defunct Sixth Street Marketplace, a 1980s shopping mall that closed quietly in 2002. Under the proposed $10 million renovation, the armory would house a first-floor food market, a second-floor live-music venue and a third-floor ballroom; the second and third floors would be accessible through a luxury hotel that would adjoin the armory.

NH District Corp. master planner Michael Hallmark, an architect and urban developer from the Los Angeles-based Future Cities firm, said if the project is approved and all goes according to schedule, the renovated armory, hotel and arena should be completed by mid-2022. 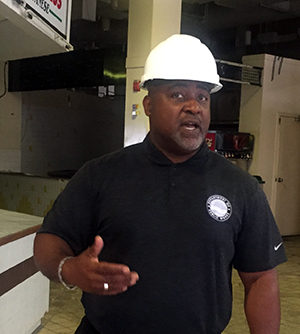 “This right here is the gem of the entire thing,” said Bobby Vincent Jr., the city’s public works director, who led the press tour. It may take a bit of imagination to envision it, he acknowledged, but the ballroom, which has not been accessible to the public for decades, would look out onto a pedestrian walkway and the new arena, if the plan is approved by Richmond City Council. An advisory commission is being assembled in September, and it will present its findings to council members after a 90-day study.

Hallmark called the neglect of the armory an “embarrassment,” but as master planner for NH District Corp., he said that the historic building was the “most interesting, most exciting part of the development.”

Jim Nolan, press secretary for Richmond Mayor Levar Stoney, said the Blues Armory renovation would be entirely privately funded but remain a city property, and the party leasing the building would be responsible for its maintenance. The armory is registered as a Virginia Historic Landmark, so it cannot be demolished.

Hallmark said that NH District Corp. intends to respect the history of the 1910 building, but would not seek historic tax credits in order to have more design flexibility.