At 3:30 a.m. on Sunday, May 30, Greg Milefsky stood in the middle of his store on Richmond’s West Broad Street. The windows were broken, and the bikes — both the ones for sale and the ones left by customers for repair — were all gone.

“People were coming in and stealing everything that was left,” Milefsky says. “I unplugged my server and computer and left the way I came, through the broken window.”

Milefsky’s store, Balance Bicycle Shop, has been in business for 10 years. On the last weekend of May, it became the scene of a crime.

Dozens of downtown Richmond stores and galleries were damaged and looted in early May when racial justice protests erupted nationwide after a police officer in Minneapolis killed 46-year-old George Floyd by kneeling on his neck.

“It became obvious I was going to be looted,” said Milefsky, who was watching the protests via social media. “You could see the progression down to the shop.”

Store owners boarded up windows and doors throughout the city and even in some suburban shopping centers. On May 30, Gov. Ralph Northam called a state of emergency; by late June protests continued, with protesters in Richmond and Portsmouth pulling down statues of Confederates and Christopher Columbus.

On East Broad Street, the 120-year-old Waller & Co. Jewelry store — owned by a Black family for generations — was also broken into, with watches and jewelry stolen. The shop had just reopened the day before, after being closed for two months due to the pandemic.

Leonetty Gray, whose grandfather opened Waller & Co., stood in front of the shop that Saturday night for more than three hours trying to protect it, until she felt unsafe. “It was definitely very scary, but I was not going to let them destroy my family’s legacy.”

She and her mother, Betty Waller, are the third and fourth generations of Wallers to work in the store, which is now owned by Betty Waller’s brother, Richard. The family is determined to reopen after the curfew is lifted and it is safe again.

Both the Wallers and Milefsky have GoFundMe pages; Milefsky’s proceeds will go toward paying customers whose bikes were stolen and for employees’ wages, and the Wallers’ fund will help defray expenses in rebuilding. Milefsky says he is looking to rebuild in a surrounding county. 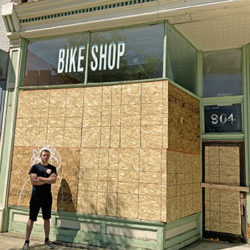