Monday afternoon was the city’s deadline for its request for proposals, and all six submitted were deemed eligible. Starting next month, Richmond will hold public meetings with opportunities for citizen input.

In addition to the Pamunkey Indian Tribe, which announced its plans to submit a project last year, the companies include Bally’s Corp., Baltimore-based Cordish Cos., Texas-based Golden Nugget Hotels & Casinos, Wind Creek Hospitality and a partnership between Colonial Downs and Maryland-based media company Urban One Inc.

The proposals varied in size, scope, cost and locations:

Of the five cities across Virginia where commercial casinos have been legalized, Richmond was the only one to delay its approval process until 2021. Casino projects in Danville, Bristol, Norfolk and Portsmouth were overwhelmingly approved by voters in last November’s referendums, and are on their way to construction over the next couple of years.

A nine-member evaluation panel named by Mayor Levar Stoney reviewed the casino proposals over the following days, assisted by consulting firm Convergence Strategy Group, and the panel will make a recommendation in May or June to the Richmond City Council, which will then choose the site and operator in June, according to the city.

The city’s first virtual community meeting to discuss the six proposals will take place March 9, and full details will be available on the city website.

At that point, the Virginia Lottery must approve the proposed casino operator, and local voters will have the opportunity to weigh in with a November referendum on the ballot. 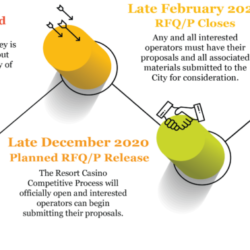